Australians working more than 45 hours or fewer than 30 hours a week are more likely to be unhappy about their lives and worried about their health, finds groundbreaking research that shows workers value flexible hours over a hefty pay rise.

Compiled by the Organisation for Economic Co-operation and Development, the research, released on Friday as part of a broader report into employment trends across the developed world, also shows the concentration of Australian businesses is hurting lower-skilled staff. 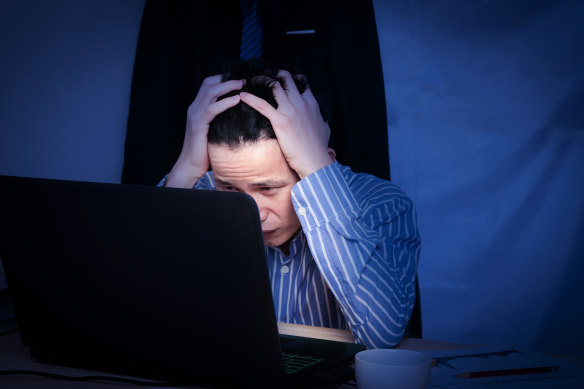 Long hours and under 35 hours, where people involuntarily work part-time, are associated with poor perceptions of health and life quality among Australians.Credit:Shutterstock

The Productivity Commission reported last month that Australians, rather than lifting productivity levels, are working longer hours than comparable countries. It found if Australia had productivity at the same level as Belgium, locals could work four fewer hours a week and still produce the same amount of economic output.

The OECD, which looked specifically at work hour trends and job satisfaction indicators in countries including Australia, Germany, Switzerland and Britain, found working more than 45 hours a week was associated with a lower probability of reporting good health outcomes.

In Australia, people doing more than 55 hours reported the worst self-perceived health levels of all workers.

Those tying themselves to their desks were also much more likely to say they were unhappy with their lives in general, dissatisfied with their work and in need of more free time.

But it was not just those burning the midnight oil who were unhappy or facing poorer health outcomes.

In Australia’s case, this may be due to the number of people who were involuntarily working part-time or, especially in the case of women, being forced to carry out caring duties that meant they could not work full-time.

The OECD said ensuring people worked “normal” hours could go some way to improving the health outcomes of staff.

“These results suggest that besides regulating maximum hours and overtime, a reduction of normal hours may also be considered as a possible lever of working time policy to enhance workers’ non-material well-being under certain conditions,” it found.

The research showed flexibility in hours, particularly starting and finishing times, boosted key measures of life satisfaction and perceptions of health. In some cases, this lifted the productivity of the entire workforce.

Flexibility around working hours might also deliver a financial benefit to businesses.

Separate work by the OECD into structural issues facing global job markets suggested Australians were being hurt by the concentration of the nation’s employers.

It found almost one in five Australians worked in a “concentrated” labour market. These are sectors where there are just a handful of employers.

Rural Australians were the most affected by this concentration, with the OECD saying almost half of workers outside urban areas were affected, compared with the OECD average of 29 per cent.

This concentration meant employers could pick and choose staff, rather than facing competition from firms that might offer higher wages or better conditions to woo a prospective employee.

The OECD said a “moderate” retraining of workers could reduce the concentration level in Australia by 14 per cent, which suggested that “reskilling and retraining policies can play a role in improving labour market conditions where markets are monopsonistic”.