A woman was scammed out of £500,000 by a fraudster posing as Gerard Butler online.

Anne Larkin, who joined Holly Willoughby and Phillip Schofield on Tuesday’s This Morning to share her ordeal, had just lost the love of her life when cruel scammers took advantage and talked her into sending large quantities of cash.

The former police officer explained that she parted ways with her money when ‘Gerard’ told her he was building a compound for homeless children and families, which included a school.

‘Did he do it through a foundation?’ Phil probed. ‘Did he say he had a charitable foundation?’ 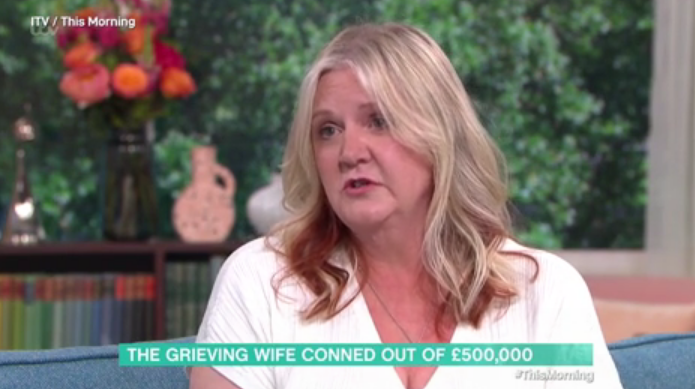 She then shared that the most money she sent her attacker in one lump sum was £20,000.

Anne was also targeted by another fraudster, named Clinton, who told her he had lost his wife and daughter in a car crash.

‘I was stupid,’ she admitted. ‘I was all these bad words, but you need to think about how you would cope if you were going through what I was going through.’

It’s fair to say that viewers had little sympathy for the victim.

‘Oh gosh, I mean I can semi-understand people getting catfished…but when “Gerard Butler” pops up in your DMs, I really struggle to understand how someone will fall for a celebrity,’ one wrote.

Echoing a similar sentiment, another said: ‘I find it really hard to sympathise with this woman, no suspicions about sending £500k to “Gerard Butler” over Facebook messenger come on.’

‘How do people believe they’re being contacted by celebrities?’ asked a third. ‘I’ve had messages from so-called celebrities and they’re deleted and blocked.’

In 2019, Gerard warned of imposters posing as him on social media.

‘Hi Everyone – this is a list of my official and only social media accounts,’ he shared. ‘If anyone reaches out to you on the internet saying they are me by email or otherwise, ignore them.

‘I do not have any personal accounts. You will only hear from me right here.’