Angelina Jolie’s kids are all grown up.

Jolie, 46, and five of her six children walked the red carpet Monday night at the premiere of her upcoming Marvel movie “Eternals.”

Each child wore a different ensemble chosen from Jolie’s closet and previously worn by the actress herself. 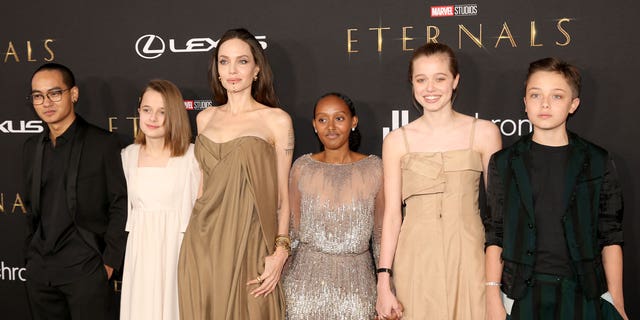 “My kids are all mixed with vintage, and in my old Oscars dress,” Jolie told Entertainment Tonight while walking the red carpet. “We did all vintage and upcycled my old stuff.”

Shiloh, 15, seemed to be wearing a version of the beige Gabriela Hearst slip dress Jolie wore earlier this year in Paris. 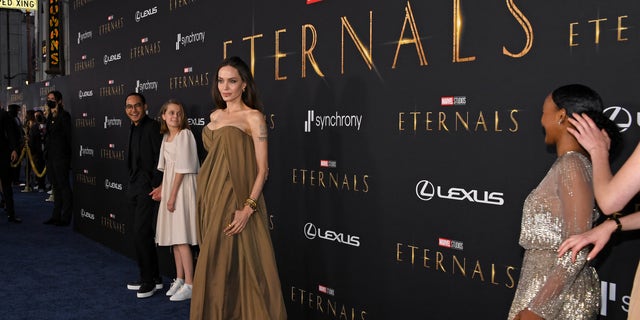 Jolie’s kids, whom she shares with ex Brad Pitt, all wore vintage or upcycled dresses straight from the actress’ closet.
(Photo by Jon Kopaloff/Getty Images for Lexus)

Despite all of the children opting for old Jolie outfits, the “Maleficent” actress joked they would not be choosing the gold bodysuit she wears in “Eternals.”

“Would you wanna see your mother wearing that?” Jolie quipped while talking to Entertainment Tonight. “I don’t know, they haven’t seen the movie, but your mom walks in with a gold spandex outfit and gold hair, they’re like, ‘What do you do for a living? What are you? Get back in your robe.'”

Jolie has always had a close relationship with her children, whom she shares with her ex-husband Brad Pitt. The two have been locked in a court battle regarding custody of the kids since the actress filed for divorce in 2016. Their divorce was finalized in 2019. 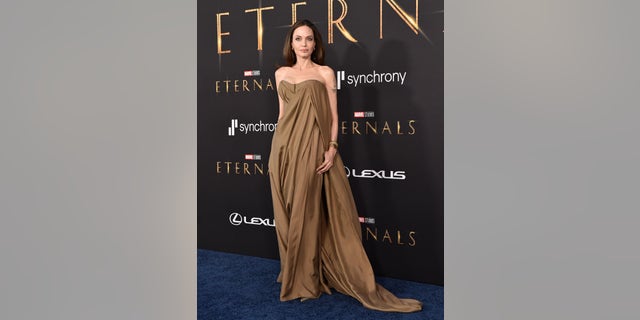 Angelina Jolie poses at the ‘Eternals’ premiere.
(Photo by Axelle/Bauer-Griffin/FilmMagic)

Jolie opened up about the symbiotic support system she now shares with her kids in an interview with E!’s “Daily Pop” in May.