On Friday, in the Wimbledon semifinals, Roger Federer and Rafael Nadal will play for the 40th time in their careers. No. 39 was only a month ago, in a French Open semifinal that Nadal won in straight sets to bring his record against Federer to 24-15.

But the clay of Paris is Nadal’s domain; he has won 12 titles at Roland Garros. The grass of the All England Club is Federer’s turf, where he has lifted the champion’s trophy eight times.

This will be their first match at Wimbledon since the 2008 final, a Nadal win that has inspired books, a documentary and lavish praise. John McEnroe and Bjorn Borg have called the match the best they have ever seen.

Martin Flanagan of The Age, a newspaper in Melbourne, Australia, wrote, “I reckon it was so good, it has refreshed the meaning of sport.”

The British journalist Chris Bowers declared, “The whole of tennis, if not the whole of sport, won through the sheer quality and drama of one of the best pieces of sporting theater tennis has ever produced.”

As for The New York Times, Christopher Clarey described it simply as “one of the greatest tennis matches ever played.”

Here are excerpts from The Times articles about all three matches between Federer and Nadal at Wimbledon. 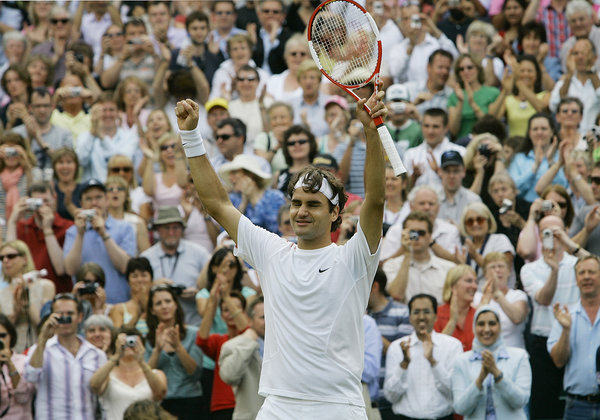 There were a few moments on this blustery Sunday, with the rallies lengthening and the English dirt swirling through the air like red clay, when Centre Court at Wimbledon seemed more like Rafael Nadal territory than Roger Federer territory.

It certainly looked that way in the tiebreaker for the third set, when Nadal pumped himself up to win it, then backpedaled to his chair with his biceps flexing and the crowd in a tizzy.

But by the time the last rumble of applause had reverberated through the stadium Nadal’s acrobatics and trademark self-belief were not enough to defeat Federer at the All England Club, which has become his private stamping ground.

He did not lose them Sunday, starting in rare form and finishing in rare-enough form to close out the victory. The 24-year-old Federer looked more relieved than overjoyed as he walked, heavy-legged, to the net to share a handshake with Nadal, the 20-year-old Spaniard, who had turned into his nemesis.

“I’m very well aware of how important this match was for me,” said the top-seeded and top-ranked Federer, who lost to Nadal in last month’s French Open final. “It was important for me to win a final against him for a change and beat him for a change.”

This was their first encounter on grass, and now a Federer-Nadal matchup is starting to look like a true tennis rivalry, one in which each player is capable of grabbing the momentum and slugging and hustling his way into the other’s head.

“This is his best surface, and I wasn’t too far away, but he was better,” Nadal said.

In a matter of moments, three sides of Roger Federer were on display at Centre Court. First came the deft and forceful overhead smash that won him the Wimbledon championship. Then came the emotional reaction: Federer dropped to his knees, rolled onto his back with his hands over his face, and sat up with tears in his eyes.

Finally, to the rousing cheers of fans, including Bjorn Borg, Federer came gliding in to accept the winner’s trophy. He wore a sheepish grin and — after a Superman-like change of clothes — his trademark white pants, white vest and white monogrammed blazer with gold trim.

There is always a dash of style with Federer, the 25-year-old from Switzerland, and now he has reached a nearly unprecedented level of substance.

Federer beat Rafael Nadal, his 21-year-old Spanish rival, in five sets Sunday joining Borg as the only men’s players in the last 100 years to win Wimbledon five times in a row.

“I’m just happy with such a great run, especially at Wimbledon, the most important tournament of my life,” Federer said. “I’m loving every minute of it, that’s clear.”

Borg sat in the front row of the royal box, next to Manolo Santana, the last Spaniard to win Wimbledon, in 1966. They came to see which player on the court below would join them in the record book.

It was Federer, whose victory adds to the discussions of whether he is the best player of the modern era. Borg, who won Wimbledon from 1976 to 1980, greeted Federer in the clubhouse, where they shared a few words and a quick embrace.

“To see him waiting there was great,” Federer said.

No man had beaten Roger Federer at Wimbledon since 2002. But in near darkness, one of the greatest tennis matches ever played concluded in the Wimbledon final Sunday with Roger Federer hitting a short forehand into the net and with a victorious Rafael Nadal flat on his back with camera flashes illuminating his drained and delighted face.

Nadal had come the closest to ending Federer’s streak at Wimbledon in last year’s final, pushing his friendly rival to five sets before ending up in tears in the locker room as Federer equaled Bjorn Borg’s modern men’s record with his fifth straight title.

Last year’s emotional tussle immediately took its place among the best Wimbledon finals, but this five-set classic — played on a rainy, gusty day — was better yet.

At 4 hours 48 minutes, it was the longest singles final in Wimbledon’s history and did not finish until 9:16 p.m. local time.

“The most important thing is to win the title,” said Nadal. “After that, you think about winning against the No. 1, probably the best player in history or close, and the fact it was so dramatic. But it’s one of the most powerful feelings I’ve had in my life.”

By the end, as hard as it was to see, the top-seeded Federer and the second-seeded Nadal had produced so much brilliant tennis under pressure that it seemed the most normal thing in the world that Federer smacked yet another ace to get out of trouble or that Nadal hunted down yet another sharply angled ground stroke and ripped an off-balance passing shot for a winner.

The capacity crowd at Centre Court, which had not diminished through two rain delays, continually roared with delight or surprise and took turns chanting each combatant’s first name, which is not the way these things usually work at proper Wimbledon.

“Probably my hardest loss, by far; I mean it’s not much harder than this right now,” Federer said later, his voice muted and his eyes red.