Tayshia Adams saved Bachelor Nation during Clare Crawley’s season of “The Bachelorette.” Tayshia stepped in after Clare found true love with Dale Moss and left the show, and Tayshia ultimately ended up getting engaged to Zac Clark. Tayshia then saved Bachelor Nation again by stepping in to co-host “The Bachelorette” Season 17 alongside Kaitlyn Bristowe, after the controversy surrounding longtime host Chris Harrison, with the two serving as guides on Katie Thurston’s journey to find love.

In June, Tayshia told The Hollywood Reporter, “I know that we are a huge step for the franchise. There are so many steps that are being taken to change the franchise right now, but this was something that I wanted to definitely be a part of.” She added, “If I can help change the franchise in any way, or change peoples’ perspectives on the show, then I wanted a part of that.” Kaitlyn also told THR, “Tayshia and I both came into it saying, ‘We want to be a part of the change.’ We wanted to see it in every way possible and I think we were both really pleased in what we saw.”

And it looks like, in this case, the changes made thus far were for the better — and Bachelor Nation seemingly agrees. Keep reading to learn about Tayshia and Kaitlyn’s big news! 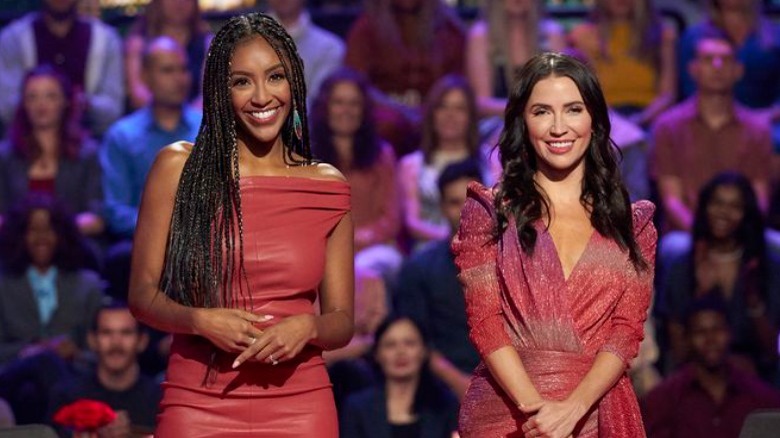 Variety reports that Tayshia Adams and Kaitlyn Bristowe will be the co-hosts for the 18th season of ABC’s “The Bachelorette,” starring Michelle Young. The outlet reported that ABC and Warner Bros. Television confirmed the news. It appears the chiefs at ABC are happy with the job Tayshia and Kaitlyn are doing sharing host duties during the 17th season of “The Bachelorette,” starring Katie Thurston.

As former stars of “The Bachelorette,” Tayshia and Kaitlyn are knocking it out of the park by stepping in to host after longtime host Chris Harrison was caught up in controversy during Matt James’ season of “The Bachelor.” According to Variety, Harrison received $9 million for leaving Bachelor Nation, where he ruled as the single host since 2002. Fans, of course, are excited to welcome these two back, as they expressed in the comments section of the show’s official Instagram announcement. “LOVE THEM!!! They killed it!! Having two perspectives is invaluable for the lead,” one user wrote. “Love them honestly,” another fan added. “Give them more airtime!”

Tayshia and Kaitlyn’s second hosting gig will begin when Michelle takes over the reins. Like Katie, Michelle was plucked from Matt’s controversial season of “The Bachelor.” According to Deadline, the next installment of “The Bachelorette” premieres on October 19, while the current season starring wraps up with a three-hour finale on August 9.