Kellyanne Conway was not pleased when her 16-year-old daughter threw major shade at Donald Trump right in front of her in a video that’s now going viral on TikTok.

Claudia Conway, 16, couldn’t be happier with the news that Joe Biden has officially been declared president by Congress — and she’s letting her Donald Trump supporter mom, Kellyanne Conway, know it! Claudia posted a video of herself on TikTok dancing to a song with the lyrics, “Well, Joe Biden is my president it’s time to get crunk, so I guess that I’ll just piss on Donald Trump.” Kellyanne is sitting at a table in the background of the video, and when she saw what was unfolding, she immediately got up and stormed out of the room.

kelly saw the camera and dipped. bout to get grounded and get cps called on me but it’s worth it i’m a savage

Kellyanne previously served as a Senior Advisor to Trump, and was his campaign manager ahead of the 2016 election. However, she stepped down from her White House role in Aug. 2020 amidst a public feud with Claudia, who was vocal about her disdain for the president. Kellyanne’s husband, George Conway, has also spoken out against Trump on a number of occasions.

“For now, and for my beloved children, it will be less drama, more mama,” Kellyanne explained, when she decided to step down. “Our four children are teens and tweens starting a new academic year that will be conducted remotely from home for at least a few months. As millions of parents nationwide know, kids’ doing ‘school from home’ requires a level of attention and vigilance that is as unusual as these times.” 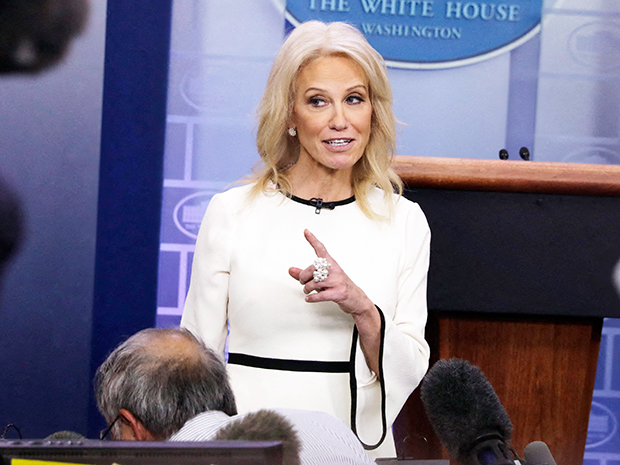 Things got so bad between Kellyanne and Claudia earlier this year, that Claudia even insisted that she was “seeking emancipation” from her parents in August. Although Kellyanne didn’t comment on this in her statement, the declaration came right around the same time that the 53-year-old left her role at the White House. Meanwhile, Claudia continued to stir up drama with her mom in October.

Days after Trump’s COVID-19 diagnosis, when he assured the public he was doing ‘much better,’ Claudia insisted that was not the case. “Apparently he is doing so badly lol,” she tweeted. “They are doing what they can to stabilize him.” Eventually, Kellyanne had to jump in and do some damage control. “My daughter, Claudia, is beautiful and brilliant,” Kellyanne wrote. “She has access to top doctors and health care and lives comfortably. Like all of you, she speculates on social media. Yet she’s 15.”

Claudia has clearly become a social media sensation for speaking out against her mother and not being afraid to criticize Trump. However, she has even bigger aspirations and wants to become a singer. Earlier this year, she auditioned for the next season of American Idol, which premieres on Feb. 14.