YouTube sensation David Dobrik is constantly thinking of ways to top his previous pranks. In the past, Dobrik tricked his friends Dirty Dom and Matt King into thinking they were actually being arrested, and even married his friend Jason Nash’s mother and then divorced her. It seems nothing is off limits for Dobrik, and his latest stunt is one of his biggest ones yet. After his friend and fellow YouTube star Toddy Smith drunk texted Dobrik’s assistant Natalie Mariduena, Dobrik put his friend on blast by displaying those texts on a massive billboard. David Dobrik’s billboard of Toddy Smith’s texts to Natalie will make you cringe with second-hand embarrassment.

On Feb. 3, Dobrik uploaded a video titled, "PUTTING HIS DRUNK TEXTS ON A BILLBOARD!!" The four-minute-long video packed in several hilarious bits, like Nash successfully making a hole-in-one hit, winning everyone in the room a thousand dollars. Then Dobrik and Nash teamed up to scare Mariduena, as well as Vlog Squad members Carly Incontro and Erin Gilfoy, by dressing up Nash in some extremely realistic (and creepy AF) alien makeup.

But the main event came when Dobrik confronted Smith and asked him if he had feelings for his assistant and long-time best friend, Mariduena. Smith denied it, prompting Mariduena to reveal she received some very thirsty texts from Smith. "I gotta go," Smith said, clearly embarrassed.

A few days later, Mariduena finally revealed the messages Smith spontaneously texted her in the middle of the night one night, and Dobrik couldn’t help but laugh at them.

The texts included Smith asking Mariduena if he could stay the night and cuddle with her, and telling her "U break my heart," and "I feel like I ruined my shot w u lol." In the process, he might have accidentally revealed he had feelings for her by saying, "I’m falling out of love w u."

Read the cringy text messages below. 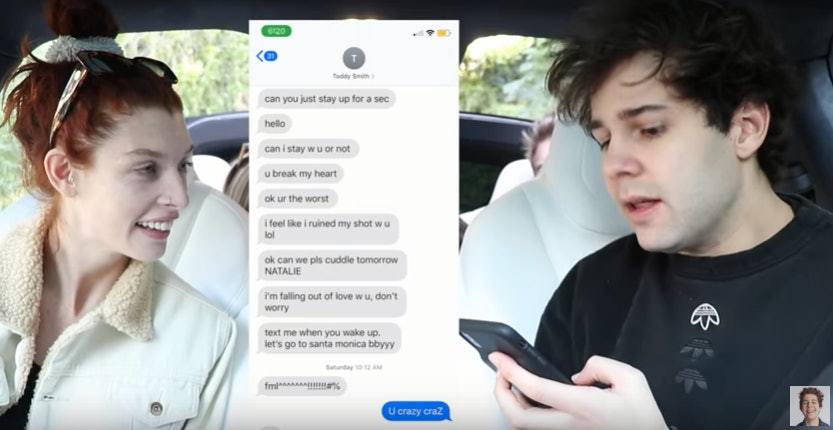 Instead of leaving the messages in the past, Dobrik printed them on a giant billboard, right next to a picture of Smith’s face. Dobrik then brought Smith to the billboard’s location, and his reaction was priceless. Actually, Smith said he couldn’t read the billboard because he has "bad eyes," but his friends made sure to fill him in on the billboard’s embarrassing content.

There’s no telling how Dobrik and his friends will top this one, but knowing them, they’ll think of something for sure.