Ed Sheeran and his wife Cherry Seaborn were spotted enjoying themselves and looking cozy while watching the Paris Saint-Germain vs. Manchester City soccer match in Paris, France on Tuesday.

Ed Sheeran, 30, and Cherry Seaborn, 29, looked like a couple in love during their latest public outing! The singer and the beauty attended the Paris Saint-Germain vs. Manchester City soccer match at Parc des Princes in Paris, France on Sept. 28 and showed off rare PDA while sitting in their seats. Cherry leaned over to give her husband a sweet kiss on the cheek at one point and it was the cutest sight to see. 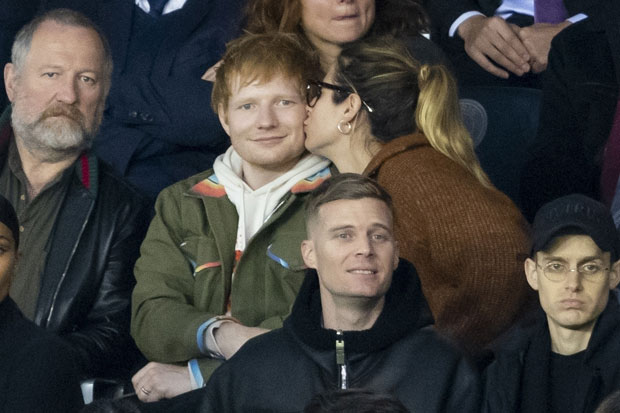 The lovebirds both wore comfortable-looking clothing, including a green jacket over a white hoodie for Ed and a brown sweater for Cherry, and were surrounded by other soccer fans who loved seeing the match. PSG ended up winning with a score of 2 to 0.

Before their latest outing, Ed has been busy with the upcoming release of his new album, =, which he announced in his Instagram video below. The album, which will be available on Oct. 29, is the fifth studio release from Ed and has his fans excited for a future tour as well.

When Ed’s not focusing on his music, he and Cherry, who were secretly married in 2019, are taking care of their one-year-old daughter Lyra. He happily announced her arrival in Sept. 2020 with an adorable pic of baby socks and a lovely message. “Last week, with the help of an amazing delivery team, Cherry gave birth to our beautiful and healthy daughter — Lyra Antarctica Seaborn Sheeran. We are completely in love with her,” it read.

Despite trying to keep things as private as possible, Ed and Cherry just adore their little family and he recently opened up about their “tiny” wedding in an interview. “Me and Cherry’s actual wedding was a tiny affair with hardly anyone there,” Ed explained on Jessie Ware’s Table Manners podcast. “We did it at night, at a random day in the middle of January, in the middle of nowhere. No one knew, no one came to it, we lit candles and we got married, went back and had a curry.”