“Is @StaceyAbrams running the Democratic Party yet? If not, what’s taking so long,” Jeffrey Wright says 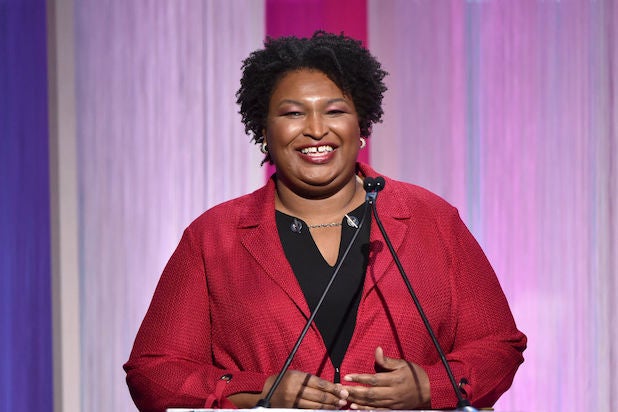 You’d think that Stacey Abrams was the on on the ballot for the love and praise she’s earned from Hollywood Democrats this week as two Democratic challengers are on the verge of winning runoff elections in her native Georgia and flipping control of the U.S. Senate.

“Stacey Abrams is a real superhero. Once again saving us all,” Mark Ruffalo wrote in a tweet, praising Abrams for her work registering voters and encouraging participation in the elections after she lost a close gubernatorial contest in the state in 2018.

“Is Stacey Abrams running the Democratic Party yet? If not, what’s taking so long,” Jeffrey Wright said in a tweet.

Abrams has emerged as the hero of the night, doing the legwork even as far back as before the COVID-19 pandemic to ensure Georgians had access to vote, leading fundraising efforts and shaping the messaging of the party in the state.

As a result of her efforts, the Rev. Raphael Warnock beat incumbent Kelly Loeffler while Jon Ossoff took a slim lead over David Perdue, the other Republican incumbent.

Hollywood has come to know Abrams well after she appeared as the star and producer of the documentary “All In: The Fight For Democracy,” which examines efforts to suppress voters and how Abrams’ group Fair Fight and the New Georgia Project have been working for a decade to turn the tide. Though she lost her bid to be Georgia’s first Black woman governor, she’s largely expected to be back on the ballot again in 2022 and is clearly a future leader for the Democrats.

Chelsea Handler said in a tweet she’d like to see a statue of Abrams in Georgia along with some other Black leaders to replace old statues of Confederate generals. And of course there’s no shortage of memes of Abrams circling the web, including of her as one of the clever players from “Game of Thrones.” One “SNL” writer even said that Abrams should be a playable character in the video game “Super Smash Bros.”

See some other tweets singing Abrams’ praises Wednesday morning below: