January Jones, Christina Hendricks, and Kiernan Shipka, the ladies of ‘Mad Men,’ reunited for a very special ‘girls night,’ where they all seemed to have a blast!

The girls are back in town! January Jones, 43, Christina Hendricks, 46, and Kiernan Shipka, 21, look like they had an epic night out on Tuesday July 27. January shared a photo of the three Mad Men actresses on her Instagram on Wednesday July 27. The women were also joined by InStyle editor-in-chief Laura Brown, 47. All the ladies looked gorgeous, and it seemed like they had an amazing night out!

Both January (who played Betty Draper on Mad Men) and Kiernan (who played Sally Draper) shared the photos on their Instagrams. January and Christina (who played Joan Harris) both looked fabulous, as they wore dark tops with floral patterns on them. Kiernan rocked a black crop top with a gold necklace, and Laura sported a bright pink floral top. January definitely had a blast and said that she “coulda sat there all night, ladies,” in the caption. January wrote that she “missed” her co-stars, and Kiernan also seemed excited about the reunion. She captioned her post, “okay the girls are back!” Laura joked that she was “crash[ing] the Madwomen summit.”

The four women seemed like they had a ball, and they all posted fun shots from the evening out with each other to their Instagram stories as well. It was really nice to see the stars reunite six years after the Mad Men series finale aired. Even though the show is long over, January and Kiernan appear to still look back on the series fondly. During the 2021 Golden Globes in February, both actresses went in their closets and found the dresses they wore to the awards show a decade earlier. Both actresses posted photos of themselves wearing their respective dresses from the 2011 ceremony, and both still fit and looked great, ten years later. 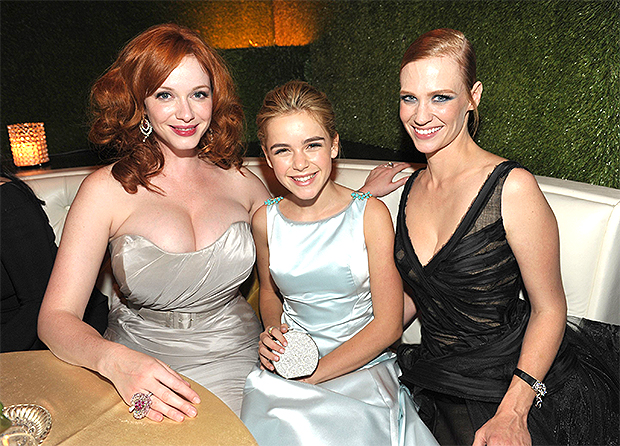 In the years since Mad Men, all three actresses have kept plenty busy and continued to amaze fans with their different roles. After the acclaimed series, January starred in The Last Man On Earth. Kiernan played the titular character in Netflix’s Chilling Adventures of Sabrina. Christina starred in the series Good Girls, and she also lent her voice to Disney-Pixar’s Toy Story 4.