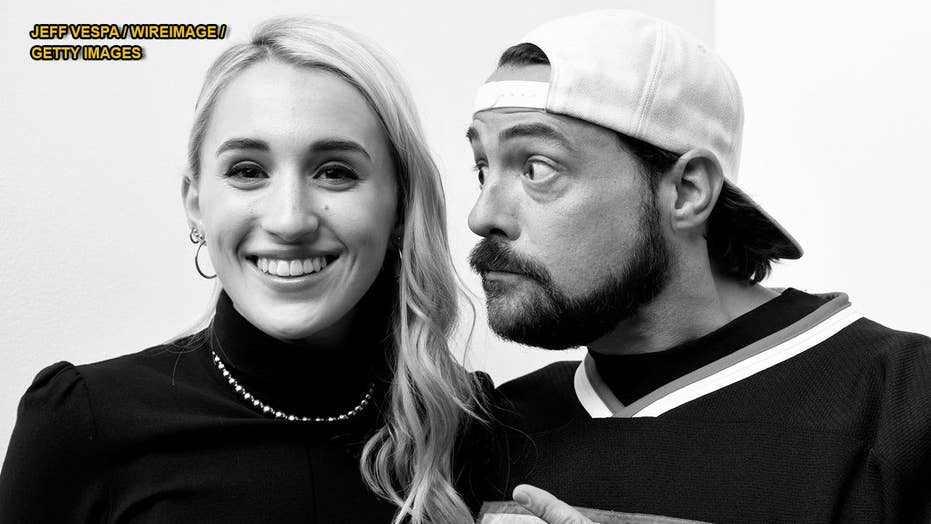 ‘Jay and Silent Bob Reboot’ star Harley Quinn Smith jokes dad Kevin Smith would ‘disown me’ if she wasn’t in the film.

Harley Quinn Smith made her debut as an actress when she was just 1 year old in the 2001 “Jay and Silent Bob Strike Back” as baby Silent Bob — and now the 20-year-old is returning to the film franchise for a completely different role.

Smith, who plays teen vigilante Milly in “Jay and Silent Bob Reboot” via Fantom Events, had no qualms being directed by her father, filmmaker Kevin Smith, who also stars in the film as Silent Bob alongside Jason Mewes as the vocal half of the duo. In fact, Smith learned early on that her family was completely different from others.

But these days, Smith is determined to carve out her own identity in Hollywood. She was also personally picked by Quentin Tarantino to star in “Once Upon A Time… in Hollywood” alongside Leonardo DiCaprio, Brad Pitt and Margot Robbie. 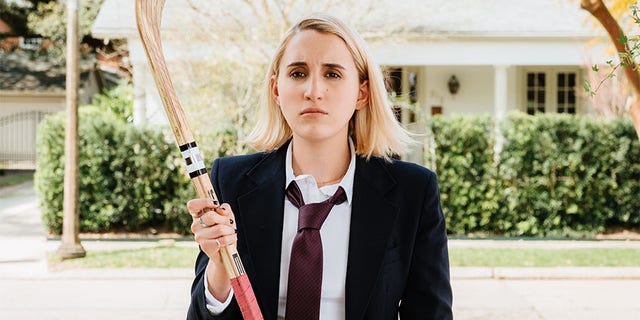 Smith spoke to Fox News about being directed by Kevin, 49, the star who surprised her the most on the set of “Jay and Silent Bob Reboot,” impressing Tarantino, 56, and what she really thinks of Robbie, 29, playing Harley Quinn.

Fox News: Growing up, when did you realize that your dad was different from other dads?
Harley Quinn Smith: I guess when he made "Red State." Our family started to receive a lot of death threats and it was kind of terrifying. And my parents never wanted to scare me, so they were kind of always just like, "No, it's fine, it's fine." But then I found out later down the line that that movie made a lot of people upset and then I kind of, with all that happening, I was like, "Oh yeah, no, our family is not very normal." We have a very different life than other people.

Fox News: What can audiences expect from “Jay and Silent Bob Reboot”?
Smith: Audiences can expect that it is the same vibe as the first one for sure — very, very similar. But this one is surprisingly emotional, which I don't really think many audience members are going to anticipate because the first one is very much not that. But the father-daughter relationship that takes place in this film really does add an aspect of emotion and depth to it. 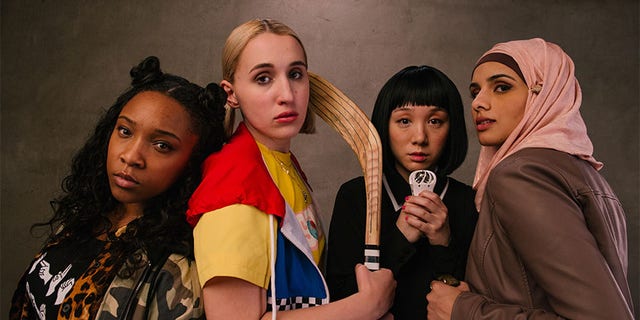 Fox News: What was it about the character that made you want to get involved?
Smith: I don't think I had a choice to be involved in the film. If I didn't my dad would probably disown me. But also on my own choice I do really love the film, so I'm very thankful to be a part of it. I play a character named Milly, or Millennium Faulken, and she is the daughter of Justice (Shannon Elizabeth) and Jay (Mewes). She discovers that Jay is her father throughout the film, but she grew up without a father so she's very badass for sure.

She has a very tough shell because she has grown up with an absent parent, so she does kind of have this armor to her to kind of protect herself because she does have this emotional hole in her life. But underneath that, she is very deeply emotional and very heartfelt, and she has been longing for a father her whole life.

So meeting Jay absolutely changes everything for her… She's the toughest character I've ever played. She has an extreme attitude to her, which I love. It's my favorite part about her. 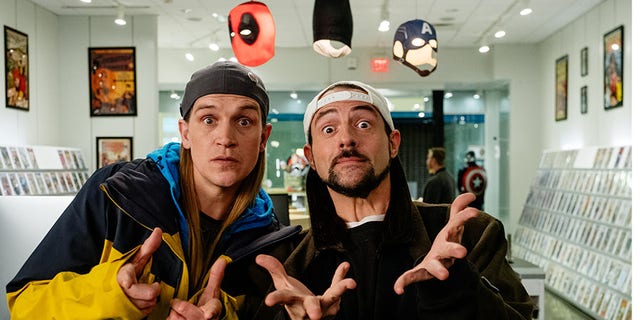 Fox News: Who would you say surprised you the most on set and why?
Smith: I mean, like everybody else, I was the most surprised about Ben Affleck because he used to a be huge part of my family's life and he hadn't been in our lives for many years. So the fact that he and my dad reconciled and rebuilt their relationship was kind of a shock to everybody.

It's a huge shock to me. I haven't seen him since I was so small. So to see him again, I was like, "Oh yeah." So he was a huge surprise. I was very excited about Craig Robinson, who I never actually got to meet, but I was so stoked about him because I love "The Office."

Fox News: What’s it like as an actress to be directed by your dad?
Smith: It’s not very different working with my dad compared to other directors because he doesn't treat me differently than any other actor, which is my preference. I wouldn't want him to. So there is the aspect that we are automatically much closer than I would be with any director. So with that in mind, we do kind of have more fun from the get-go because there's a level of comfort that is already there. But it doesn't differ much from working with any other director otherwise. 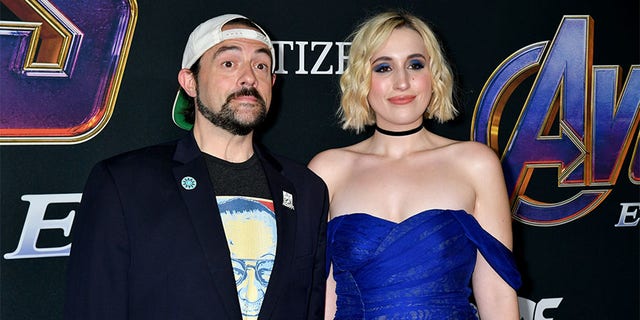 Fox News: You’ve previously mentioned that despite growing up in the entertainment industry, you wanted to carve out your own identity and make it on your terms.
Smith: Absolutely. It’s more important to me than anything else that I prove myself to everybody that I have a right to be here just as much as everybody else, and I deserve to be here. Just because my dad is in the entertainment industry doesn't mean that I can't be as well. And I'm very thankful because I had my foot in the door through him, but I've had to work just as hard as everybody else. 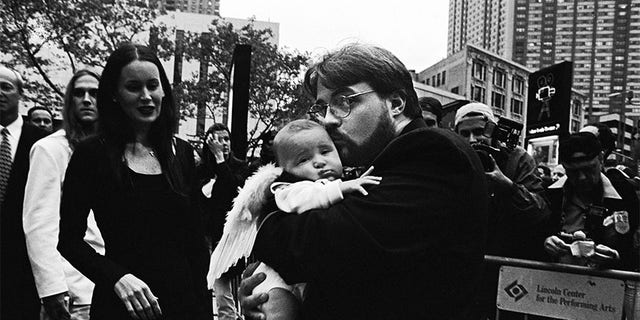 American director and screenwriter Kevin Smith holds daughter Harley Quinn dressed in angel wings on the red carpet at the premiere of this film "Dogma" in October 1999 in New York City, New York. The controversial film, a religious comedy, was protested by the Catholic League upon its release.
(Photo by Catherine McGann/Getty Images)

I did have my foot in the door, but I have had a whole different set of things that I've had to work towards, like proving myself and working twice as hard just to kind of again prove to people that I am talented in my own right. I'm not just the daughter of somebody famous, I am my own person with my own set of talents and skills. So although I am so lucky to have had his help with my entrance into this business, I do have to work very, very hard just to show everybody and to convince them that I do deserve to be here on my own right, my own merit.

Fox News: Is it true you were personally picked by Quentin Tarantino to appear in "Once Upon a Time… in Hollywood"?
Smith: I’m pretty sure everybody was personally picked *laughs* but yeah. I auditioned for it early in 2018 and all the girls going out for the Manson family all auditioned for the same part. And so then probably a week or a month later I found out I didn't get that part. I was so bummed. 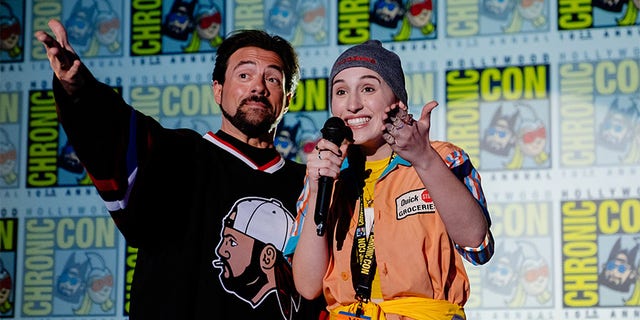 … And then probably three months later I got a call that was like, "Quentin wants you in the movie." And I was like, "No, what? … No, he doesn't." And then it happened to be the truth. It was the greatest shock of my life, absolutely, but also the best news I have ever received.

It felt like I was in a much better version of school because I learned more than I probably ever have in my life, just watching him in action. Watching him do his thing and getting to see the way he processes things and his thought process, it was really such a gift that I feel so lucky for.

Fox News: How would you describe your band the tenth?
Smith: … We are a bubblegum punk band. That's the genre that we have claimed for ourselves. I play bass and I am one of the co-vocalists. We're really inspired by Hole and Sleater-Kinney, but our inspirations are… all over the map. And we started the band about a year and a half ago. It's become one of the greatest parts of my life.

… I have no idea how I lived without making music for that long because when I was in middle school I started playing bass. And then I kind of stopped for about four years, all throughout high school. And so there was just kind of this huge gap in my life that I didn't really realize until I picked bass back up… So to be able to pick it back up again and create with my friends was just so great and such an amazing addition to my life that I can't wait to keep making more music. 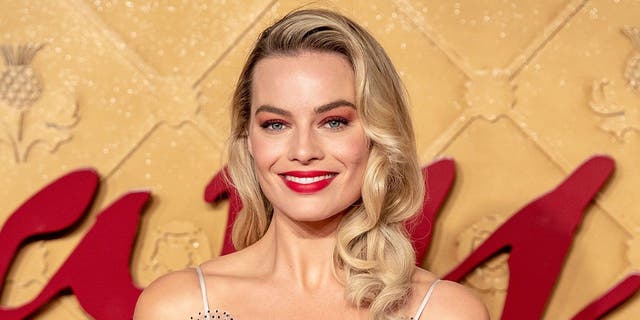 Fox News: What do you think of Margot Robbie's portrayal as Harley Quinn?
Smith: I think there's been a huge build-up and wave for the comic book community to see what a live-action Harley Quinn would look like. And for me personally, Margot Robbie fulfilled everything I could have ever wanted in a Harley Quinn. I don't think there's anyone better suited for it, and she's such an insanely talented human being and actor and producer. I am obsessed with her. I think she's just the absolute coolest. And so for me personally as a comic book fan and nerd, she does it for me and I can't wait to see "Birds of Prey." I think that's going to be absolutely phenomenal.