Jerry Seltzer, a second-generation showman who used television to revive enthusiasm for roller derby, the contact sport played on wheels that his father invented in the 1930s, died on July 1 at his home in Sonoma, Calif. He was 87.

His son Steven said the cause was pulmonary fibrosis.

When Mr. Seltzer took over the roller derby business in 1959 from his father, Leo, it was still the ferocious blue-collar game it had long been, with two teams of five helmeted players muscling, elbowing, kicking, shoving and tossing each other while circling a banked track counterclockwise. And he kept it that way.

The game had reached its peak soon after World War II, when arenas and armories filled with fans to see the brawling contests. Television viewing soared as well, on CBS and later on ABC, which carried as many as three roller derby matches a week in 1951 to fill its schedule.

The TV critic Jack Gould of The New York Times wrote in 1949 that roller derby “represents television at its most narcotic.”

But overexposure on ABC burst the roller derby bubble. Crowds for the live games thinned. The business grew stale. And Leo Seltzer was preparing to shut it down when Jerry, then 27, said he had an idea that might keep the sport alive. 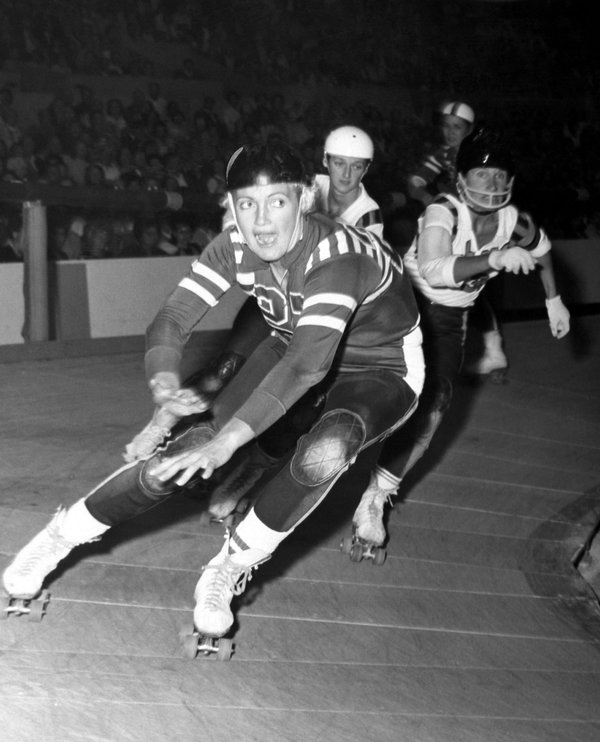 Recognizing that TV was still critical to roller derby’s survival, he began recording kinescopes — films shot from a TV monitor — of games played in a former auto repair shop in Oakland, Calif. He then sold them to a local station, which carried the contests weekly. In that way, he and not a network executive controlled how frequently roller derby was seen nationwide.

That helped stoke interest in the Bay Area, and Jerry Seltzer soon began to record the contests on broadcast-quality videotape, which delivered better pictures than the grainy kinescopes. He started shipping tapes around the country, and within a few years people were following the exploits of derby stars like Charlie O’Connell, Ann Calvello and Joan Weston, known as “the Blonde Bomber,” on about 120 local stations in the United States and Canada.

All of Mr. Seltzer’s teams had rosters of both men and women, unusual in any sport then and now. They would compete by gender in alternate periods in a game.

Television viewers apparently didn’t mind that the action was recorded, at Kezar Pavilion in San Francisco, after Mr. Seltzer had moved the games there from the repair shop. But the taping strategy demonstrated that roller derby could also succeed as a live event outside the San Francisco area.

In 1960, after a station in Portland, Ore., carried a Seltzer broadcast, hundreds of fans wrote letters saying they wanted to attend a game there. Mr. Seltzer scheduled one in Portland, and some 9,000 people showed up.

“It suddenly occurred to me,” he was quoted as saying in “Five Strides on the Banked Track: The Life and Times of the Roller Derby” (1971), by Frank Deford, “that there were no longer any boundaries as we had known them. As far as that great eye extends, people have the same interests.”

Mr. Seltzer used his television ratings to determine where to book games. At various times there were anywhere from four to eight teams in the league, and Mr. Seltzer owned all of them, including the San Francisco Bay Bombers, the premiere franchise; the New York Chiefs; and the Northwest Cardinals.

He eventually set up monthslong schedules of annual touring by his teams. Attendance and ratings swelled.

Mr. Seltzer later said that his organization, formally called the International Roller Derby League, had put an emphasis on diversity, and not just by gender.

“There were gay skaters from the ’30s on,” Mr. Seltzer wrote on his blog, Roller Derby Jesus, last year. “We integrated African-Americans, Mexicans, Samoans, etc., early. The apex was reached in my era, when one of the strongest and best teams was virtually all gay, men and women.”

Gerald Edwin Seltzer was born on June 3, 1932, in Portland, Ore., to Leo and Rose (Weinstein) Seltzer, a homemaker. After his mother died when Gerald was about 12, he moved to Chicago with his father and his sister, Gloria.

Leo Seltzer, a theater owner, had successfully promoted Depression-era walkathons — grueling endurance contests much like the era’s dance marathons — when he conceived of roller derby in 1935, after reading a magazine article that said that more than 90 percent of Americans had roller-skated in their lives. He saw roller derby as an endurance event as well: a race of 57,000 laps, or 4,000 miles, on a track, with alternating teams of men and women.

The sport’s rules evolved, eventually calling for sprints between teams of five. Perhaps inevitably, rough physical play became part of the game. Around 1938, acting on a suggestion by the writer Damon Runyon, who had met Mr. Seltzer at a roller derby event in Miami, he formalized the use of body contact, making roller derby even more of a spectacle on wheels.

Jerry Seltzer grew up in the sport, traveling to games with his father. After earning a bachelor’s degree in business from Northwestern University, he sold sporting goods and worked part time for his father as a trackside announcer. After nearly 25 years in charge, Leo Seltzer passed the business to Jerry.

“One of the reasons Leo gave him the company was he wanted to see if his son could make good,” Jerry’s son Steven said in a phone interview.

In addition to creating an early version of television syndication by sending videotapes to local stations, Jerry Seltzer produced a documentary, “Derby” (1970), and reduced both the size of the roller derby track and the angle of its banking to allow for easier viewing.

“His father had a humongous track that took days to take down,” Jim Fitzpatrick, a friend of Mr. Seltzer’s and a former derby skater, said in an interview. “Jerry got a smaller track that opened things up for more opportunities, like one-nighters around the country.”

Mr. Seltzer shut down the business in late 1973, saying rising oil prices had made it too expensive for teams to tour and for arena owners to heat their buildings.

He moved into other fields. In 1974 he was a founder of Bay Area Seating Service, or BASS, a computerized ticketing agency. He later joined the international agency Ticketmaster in 1985 as an executive, remaining there until 1993.

After moving from Santa Monica to Sonoma, Mr. Seltzer and a friend, Carolyn Stolman, founded the Sonoma International Film Festival in 1997.

In addition to his son Steven, Mr. Seltzer is survived by a daughter, Ellen Seltzer; another son, Richard; and four grandchildren. His marriage to Marjorie Sternfield ended in divorce. His second wife, Judi Flowers, died in 2017.

For the past decade or so, Mr. Seltzer had played the role of unpaid and unofficial commissioner to some of the many amateur roller derby leagues that have formed around the world.

He was pleased to see that roller derby had survived, and that it was largely now played by women.

“It’s become a movement,” he told the Block Club, a news blog about Chicago neighborhoods, in 2017. “It’s become a symbol of women empowerment.”