Meanwhile, social media users joke about the mortality of the winner of Hot Dog Eating Contest as they think that the competitive eater would have been dead based on the study.

AceShowbiz -Joey Chestnut may not have any intention to change his eating habits. A new study finds that eating a hot dog could take 36 minutes of someone’s life, but the winner of Hot Dog Eating Contest doesn’t seem to be worried at all.

Catching wind of an article about the study, the hot dog-eating champion has responded with humor. “Interesting, I might need to eat more nuts to get time back,” so he tweeted on Monday, August 23, before jokingly proposing a conspiracy theory, “Or… Researchers at University of Michigan could be working for Russia.” 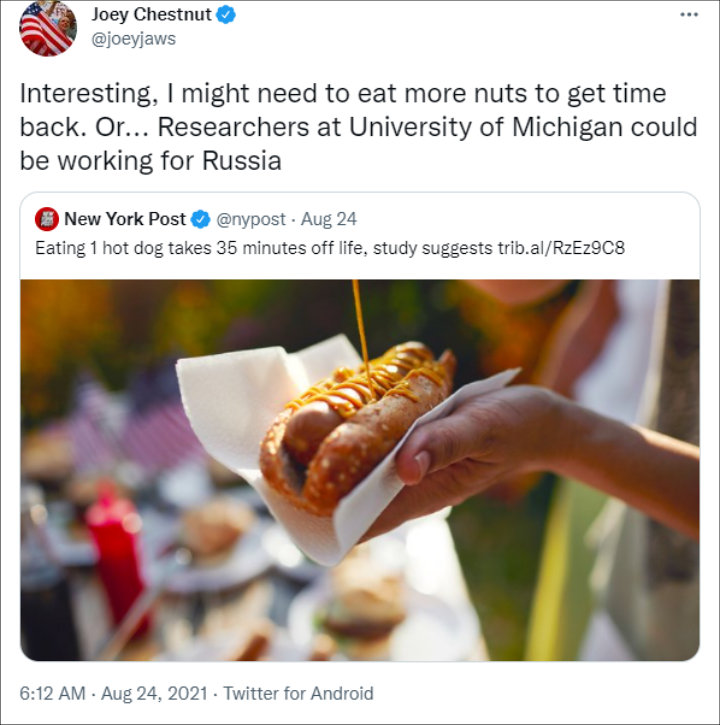 The study, conducted by researchers from the University of Michigan School of Public Health, Department of Environmental Health Sciences, was published earlier this month in the journal Nature Food. The study places foods in a “health nutritional index,” essentially ranking them by minutes gained or lost upon ingestion. The study ranked foods that ranged from 74 minutes lost, to 80 gained.

“Eating a hot dog could cost you 36 minutes of healthy life, while choosing to eat a serving of nuts instead could help you gain 26 minutes of extra healthy life,” read a press release for the study. According to the findings, one beef hot dog on a bun costs whoever eats it 36 minutes off their life, “largely due to the detrimental effect of processed meat.” On the other hand, salted peanuts, baked salmon, and rice with beans had the opposite result, gaining between 10 and 15 minutes.

“Previous studies investigating healthy or sustainable diets have often reduced their findings to a discussion of plant-based versus animal-based foods, with the latter stigmatized as the least nutritious and sustainable,” the study continued. “Although we find that plant-based foods generally perform better, there are considerable variations within both plant-based and animal-based foods that should be acknowledged before such generalized inferences are warranted.”

“In agreement with previous studies, this suggests that nutritionally beneficial foods might not always generate the lowest environmental impacts and vice versa,” it stated.

According to The Sporting News, Joey has eaten a combined 1,094 hot dogs since his debut at the 2005 Nathan’s Hot Dog Eating Contest. Using the findings of the study, that equates to 39,384 minutes off his life. That’s 656.4 hours, or 27.35 days. That doesn’t include hot dogs eaten during qualifying events or during training. During quarantine alone, Joey admitted he had 90 pounds of hot dog.