The Duchess of Cambridge has confirmed she will be teaming up with Roger Federer to raise money for disadvantaged and vulnerable children.

In an announcement shared by Kensington Palace on Wednesday, it was revealed the royal and tennis star, on behalf of the Laver Cup, will team up to launch a charitable collaboration in aid of two organisations of which the Duchess is Patron – Action for Children and the Lawn Tennis Association (LTA), whose charitable arm is the LTA Tennis Foundation.

All proceeds raised from tickets to the Laver Cup Open Practice Day, which will take place on Thursday 22nd September at The O2 in London, will be split between the two charities. Tickets to the Open Practice Day, which will give fans the chance to watch Roger and other superstars of Team Europe and Team World take their final practice on-court, go on sale on Monday 22nd August.

MORE: 14 of Kate Middleton’s funniest and most relatable reactions at Wimbledon

Ahead of the Open Practice Day, the collaboration will also see the Laver Cup host a day of tennis in East London for children supported by Action for Children and young people from the local area who are part of the LTA SERVES programme.

Kate, who is a regular at Wimbledon every year, is an avid tennis fan. She took over the role of patron of the All England Lawn Tennis and Croquet Club from the Queen in 2016. 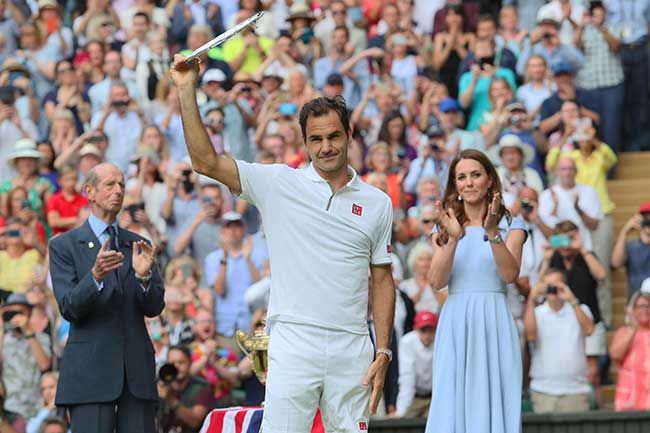 Duchess Kate is teaming up with Roger Federer

Eight-time Wimbledon champion Roger is a long-time friend of the Middleton family and he and his wife Mirka even attended Pippa’s wedding to James Matthews in 2017.

During her 2019 visit to Wimbledon, Kate revealed George is into tennis and had been practising his swing with the sportstar. Asked about George’s progress, Roger told reporters the little Prince showed promise, adding: “At that stage it’s all about just touching the ball. It’s already good. Same with my boys.”

Meanwhile, at this year’s Laver Cup, which is taking place in London for the first time in September, tennis fans will see the likes of Roger, 41, join forces with Novak Djokovic, Andy Murray and Rafael Nadal.

MORE: Andy Murray opens up about career sacrifices wife Kim Sears made to support him

The four tennis legends are set to represent Team Europe at The O2 from 23 and 25 September, and will be joined on the team by Stefanos Tsitsipas and Casper Ruud while Bjorn Borg will act as team captain.

They will face off against a Rest of the World team which so far consists of Canada’s Felix Auger-Aliassime, USA’s Taylor Fritz and Jack Sock, as well as Argentina’s Diego Schwartzman.

Make sure you never miss a ROYAL story! Sign up to our newsletter to get all of our celebrity and royal news delivered directly to your inbox.