After having seen their Valentine’s Day posts, you may be in need of a refresher on Kendall Jenner and Devin Booker’s reported relationship timeline. And I’ve got you covered.

ICYMI: Jenner and Booker were first romantically linked in April of 2020. Back then it was pretty juicy news because Booker was previously romantically linked to Jordyn Woods. In fact, Jenner and her once-upon-a-time-beau Ben Simmons even reportedly once went on a double date with Booker and Woods back in May of 2018.

Jenner and Booker have kept things relatively quiet as their rumored romance continued, which is pretty par for the course for Jenner. “I’m very young and right now I feel like relationships aren’t always super-certain and I don’t want to bring too much attention to something if you don’t really know long term [what it’s going to be]," Jenner said in a May 2019 interview with GQ Australia when she was still linked to Booker. "A relationship is only meant to be between two people, and the second you make it the world’s business is when it starts messing with the two people mentally. Like once everyone is let in, you’re letting all these opinions into your relationships, and I don’t think that’s fair.” Based on that quote, I think it’s safe to say Jenner must have been pretty sure about Booker in order to become Instagram Official with him on Valentine’s Day 2021. See what happened from April to then here:

Booker and Jenner were first linked in April of 2020 when TMZ shared pictures of them reportedly road tripping to Sedona, Arizona in the NBA star’s Maybach.

While an eyewitness reportedly told TMZ that the pair "looked like a couple," other sources who claim to be in Booker and Jenner’s circle reportedly maintained the two were just friends. "Kendall and friends have a small social circle amongst the group, who have been following the same social distancing and physical distancing guidelines," one such source reportedly told TMZ at the time. "Devin is a friend and is part of the small group." The source reportedly added, “They took a road trip for some much-needed air" and kept away from from other people to follow social-distancing guidelines.

Despite the claim that their relationship was platonic, the internet was abuzz with rumors of a romance. And, of course, it wasn’t long before the haters chimed in with their thoughts. When one hater in particular suggested NBA players were "passing" Jenner around in a since-deleted tweet, a fan came to her defense by saying, "Maybe she passing them around."

Jenner took note of the exchange and chimed in with what just might be the most iconic tweet of all time:

So, yeah. If her and Booker were an item, I think it’s safe to say Jenner was fully on board.

May 2020: She reportedly picks him up from the airport.

I don’t know about you, but I personally think picking someone up from the airport is one of the most romantic acts of all time. Especially when you have to fight Los Angeles traffic to get there.

On May 25, which just so happened to be Memorial Day (extra traffic!), Jenner was reportedly photographed picking Booker up from the Van Nuys Airport in Los Angeles in her Mercedes G-Wagon.

They may have really just been friends back in April, but Booker and Jenner were reportedly "hooking up" by June. A source who reportedly spoke to Us Weekly on June 3 reportedly claimed the supermodel and the NBA star were "hooking up" but that their relationship apparently "wasn’t serious."

The source reportedly added, "she’s talking to a couple different guys. She has so many men after her it’s crazy."

July 2020: Fans think they might have gone on a trip together.

Fans thought the two might have taken a trip together when they posted pictures from what seemed to be the same location.

And here’s Jenner’s from July 18, which she noted was from a "few weeks ago":

The two started off the month of August with some good old fashioned cyber PDA. Jenner posted a video of herself posing for the camera and captioned it with a strawberry emoji. Booker flirtatiously commented on the post, "I like strawberries," to which Jenner responded with four strawberry emojis. 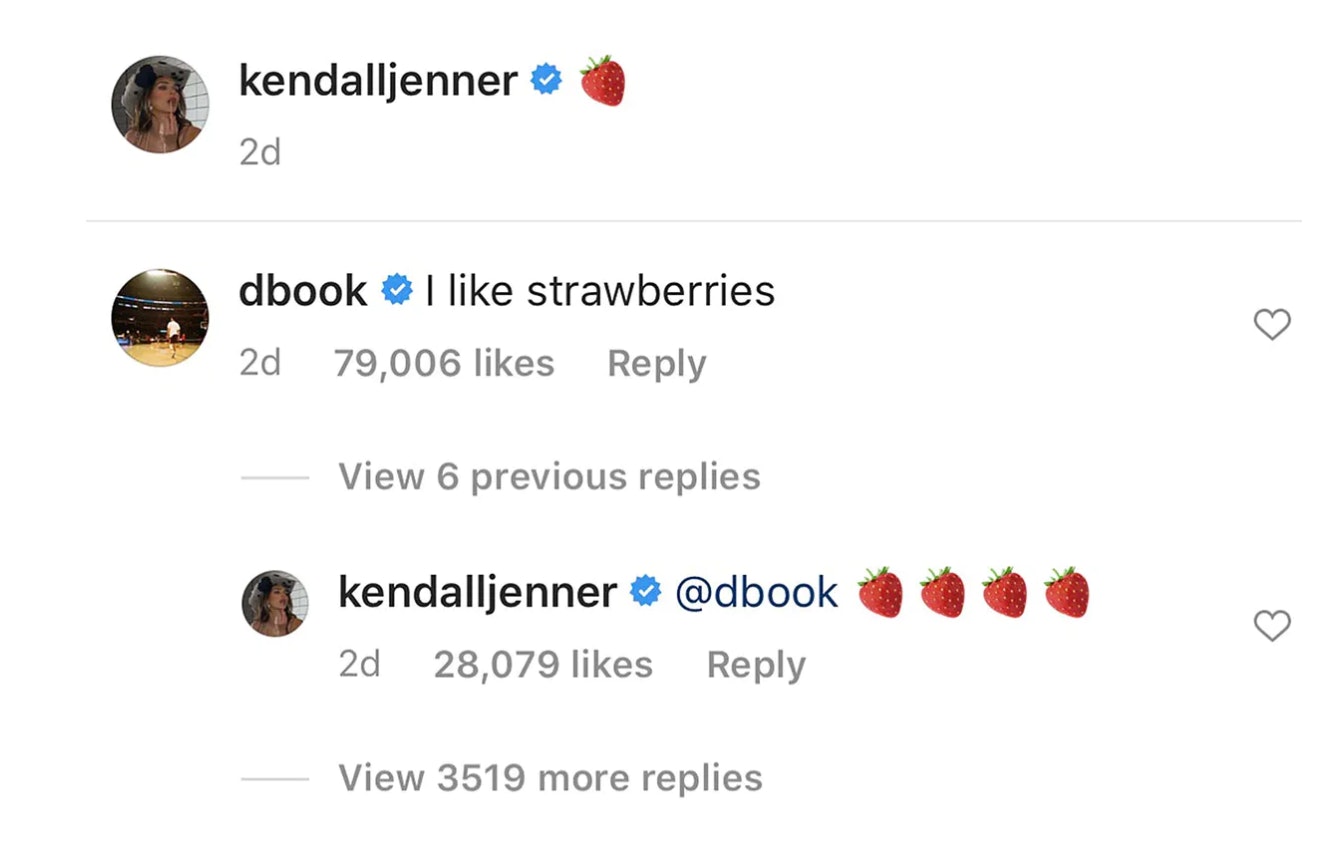 Then, on Aug. 21, The Sun released photos of the pair packing on some IRL PDA while reportedly chilling at a Malibu beach on Aug. 19. The pictures were super steamy, with one featuring a bikini-clad Jenner lying on top of Booker.

Some particularly astute fans noticed Jenner and Booker together in the background of a picture Kim Kardashian posted of Scott Disick and his son Mason at her controversial 40th birthday party at a private island.

January 2021: He low-key acknowledges their relationship on Insta.

On Jan. 20, Booker took their online PDA to the next level when he shared an Instagram shot Jenner had posted of herself in a bikini to his story. "Whew," he wrote with a sweating emoji alongside the post. 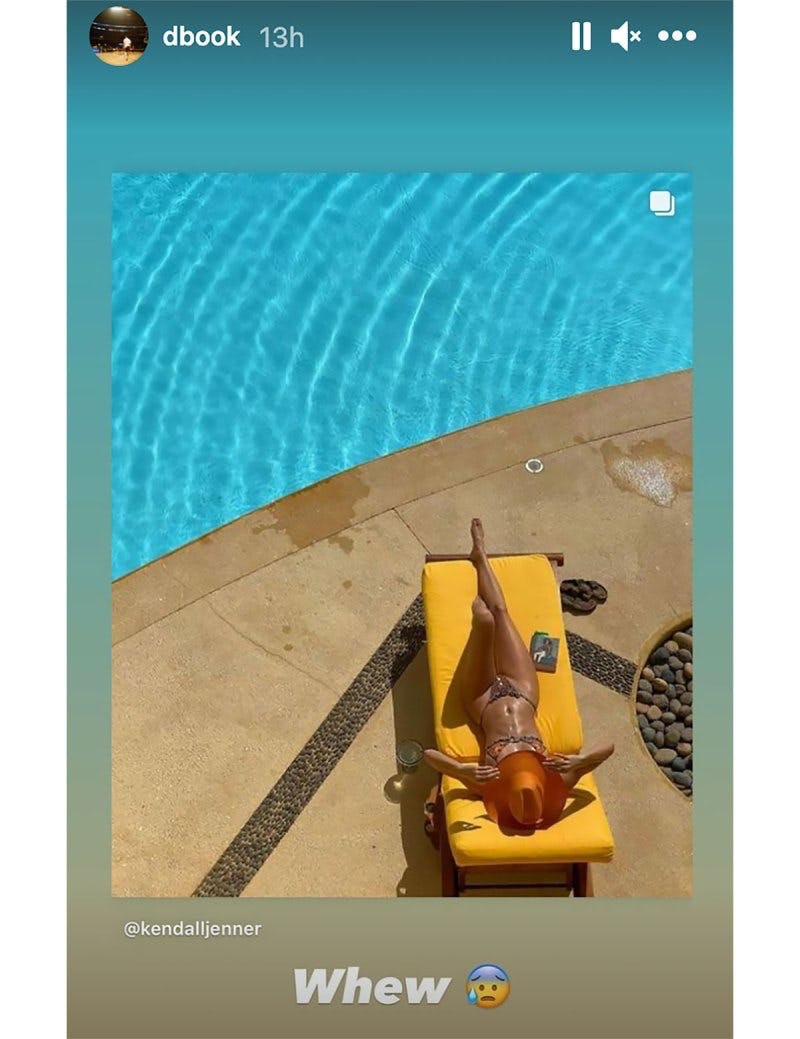 Valentine’s Day was a big day for Booker and Jenner as the two finally became Instagram official. For his part, Booker shared a video of Jenner playing with a dog to his Instagram Story. He tagged Jenner in the story in question and even put a cute little heart emoji around her name. Daww.

In addition to the dog video, Booker also shared a video of himself and Jenner napping together outside.

For her part, Jenner posted this sweet shot to her Instagram Story: 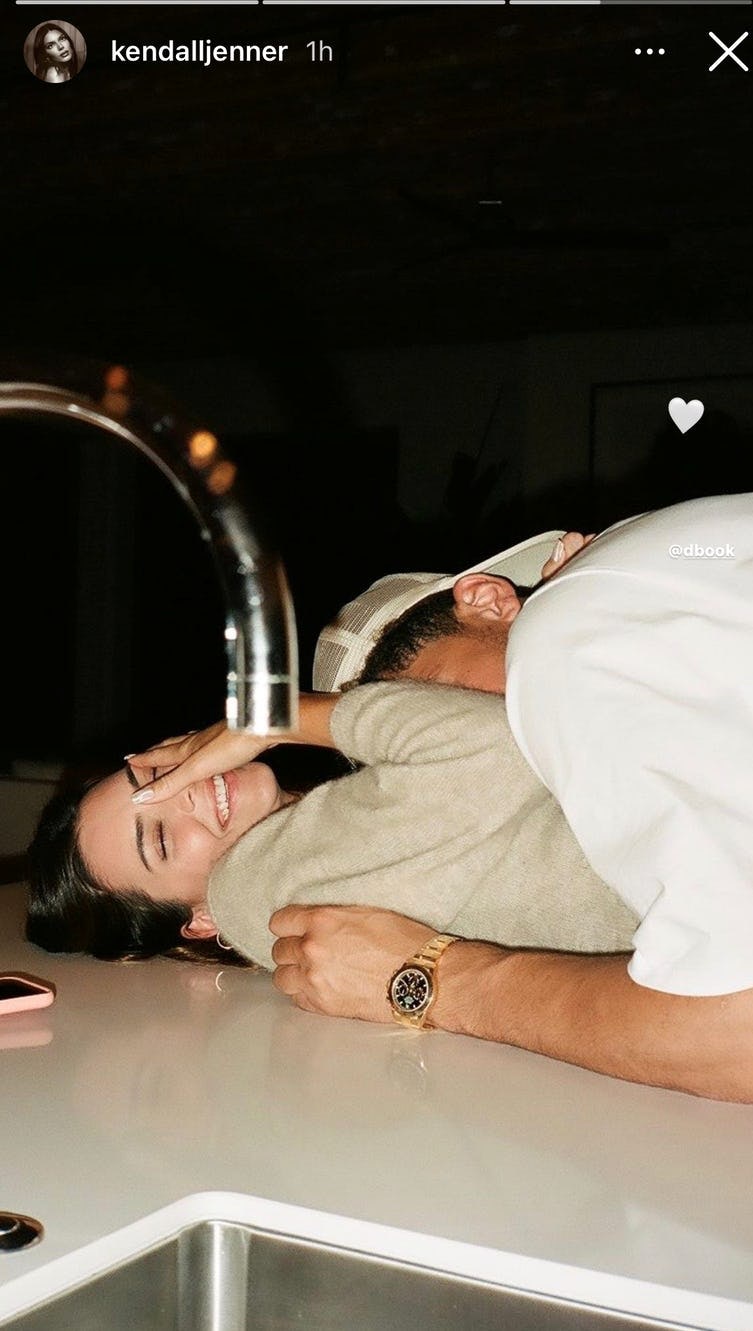 Yay! Happy for them!