Lisa Rinna from The Real Housewives of Beverly Hills stole Halloween once again with an iconic outfit. The actress showed up at a party wearing the Versace look-a-like dress that Jennifer Lopez famously wore at the Grammys in the year 2000.

Rinna wore the outfit that has a plunging neckline flawlessly and that J.Lo recently wore again during a Versace runway show. The RHOBH star rocked the look just like the Puerto Rican diva did almost 20 years ago.

The Versace dress at the time was so iconic that it inspired Google to create Google Images so users could search indexed photos.

Last year, Rinna dressed up as her fellow Bravo housewife Erika Jayne for a Halloween party that was filmed for the show. 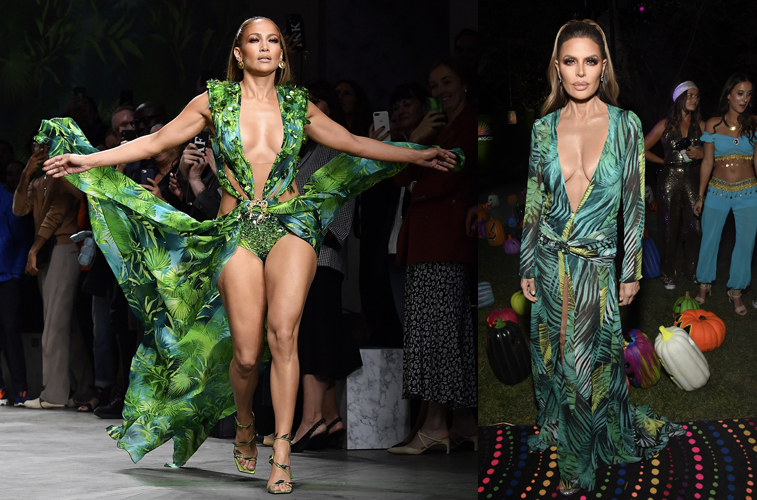 Housewives and fans react to the iconic look

Rinna shared her Halloween costume on her Instagram profile with all of her followers. There was a lot of positive feedback from everyone, including fellow Bravolebrities and her multitude of fans.

“OMG amazing and I missed you last night,” Richards’ other daughter Farrah said.

“I actually thought you were J.Lo at first glance,” another fan added.

What shall we name her???

Rinna is set to return to season 10 of RHOBH as production is already close to wrapping up. This would be the first season without Lisa Vanderpump after her exit from the reality series earlier this year.

There have been rumors that, although there were two additions to the cast, there has not been too much drama. Like it or not, these Bravo shows thrive on the scuffles between castmates and if there’s no real conflict, what’s the point?

“This season is light on drama so far,” a source told Hollywood Life. “There have been zero fights so far.”

Rinna is helping introduce two of the new housewives in the upcoming season as both Sutton Stracke and Garcelle Beauvais are her friends. The insider revealed that the former is the one stirring the be the only one stirring the pot.

“Sutton seems to be the one causing the only type of stirring among cast members as she hasn’t bonded with a lot of them quite yet,” the source added.

“[There’s] been essentially no drama at all with Lisa Vanderpump’s departure,” the source continued. “The ladies are all truly friends and [are] getting along, seemingly.”

She did not come to play. #Maleficent: Mistress of Evil @disneymaleficent #maleficent 🌹

Sutton Strack signed on to ‘RHOBH’ thanks to Lisa Rinna

As we mentioned before, it was Rinna that convinced Strack to join the Bravo reality series.

“They have been harassing me for years to do this,” Sutton told ET. “My really good friend Lisa Rinna was urging me, kind of pushing me, telling me, ‘It’s going to be fun, it’s a great group of girls, you’re going to love it and get along with everyone, so just do it.’ So, I did!”

Stracke added that she couldn’t pass up on the “once-in-a-lifetime opportunity” to join RHOBH. She does admit that she will a lot different than the rest of the cast.

“I am probably going to be the strangest one on the show,” she said. “I don’t do Botox or anything! But, who knows? Next year, when it comes out, I may be like, ‘Lord, mercy! We have to get to the plastic surgeon quick.’”

The Real Housewives of Beverly Hills is expected to premiere season 10 at the beginning of 2020 on Bravo.