Lorde shared an eye-catching cover photo of herself showing off her behind while walking in a yellow thong swimsuit on the cover of ‘Solar Power’, which she posted to her website on June 6.

Lorde, 24, got her fans’ attention when she updated her website with a brand new pic of the cover art for her upcoming single called “Solar Power.” The singer showed off her behind while wearing what appeared to be a long-sleeved yellow thong bodysuit while taking a big step on a beach in the sizzling pic. She had one arm stretched out and her long dark locks down as the blue sky could be seen above her and the ocean could be seen in the background.

“ARRIVING IN 2021 … PATIENCE IS A VIRTUE,” it read underneath the new cover photo.

Lorde’s new single comes four years after she released her last single, “Homemade Dynamite” from her album Melodrama in 2017. In May 2020, she gave fans on her email list an update that hinted at a new album coming soon. 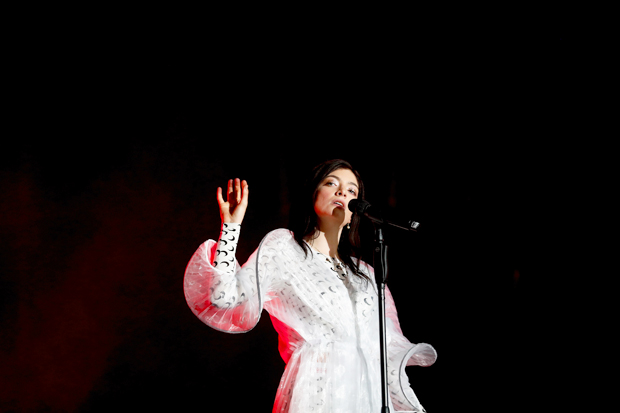 “I started going back to the studio again in December, just for something to do, and to my surprise, good things came out,” she wrote in the update. “Happy, playful things. I felt my melodic muscles flexing and strengthening. [Music producer and The Bleachers frontman] Jack [Antonoff] came over to work in the studio in Auckland, and I went to LA. It flowed. A thing started to take shape.”

She also revealed she has been quarantining in her home country of New Zealand during the COVID-19 pandemic and has been working with Jack through FaceTime. “We’re still working away — jack and I FaceTimed for over an hour this morning going over everything,” she explained before admitting that the project was going to “take a while longer.”

She made sure to add that it will be well worth the wait. “I want nothing more than to feed you treats, pop perfect morsels straight into your little mouths. But as I get older I realise there’s something to be said for the pleasant feeling of waiting for something of quality to become available to you,” she said. “I can tell you, this new thing, it’s got its own colours now. If you know anything about my work, you’ll know what that means.”