COOPERSTOWN, N.Y. — They stretch across the front row of a display case at the official Hall of Fame gift shop, autographed baseballs in plastic boxes from the five living players to be inducted on Sunday. Edgar Martinez’s ball goes for $249, Mike Mussina’s for $199 and Harold Baines’s and Lee Smith’s for $149 each.

A baseball signed by Mariano Rivera costs $699, nearly as much as the other four combined. Then again, you get what you pay for: in Rivera’s case, an elegant autograph, each letter scripted with the precision of a final pitch of a World Series.

“Many times, I threw the pitch and the results were to my favor, so right after that, I don’t have to throw no more pitches,” Rivera said last week. “I was happy with that — and then I had to make sure that I don’t end up in the bottom of the pile.”

Rivera threw his final pitch in 2013, and now he is on top of the pile: the only Hall of Famer ever elected unanimously by the baseball writers.

Roy Halladay, who died in a plane crash in 2017 and was perhaps baseball’s most dominant pitcher for a decade, was also elected on the first ballot, with 85.4 percent of the vote. Martinez, a patient and powerful designated hitter for the Seattle Mariners, made it on his 10th try, while Mussina, a durable, dependable starter for the Yankees and the Baltimore Orioles, made it on his sixth. 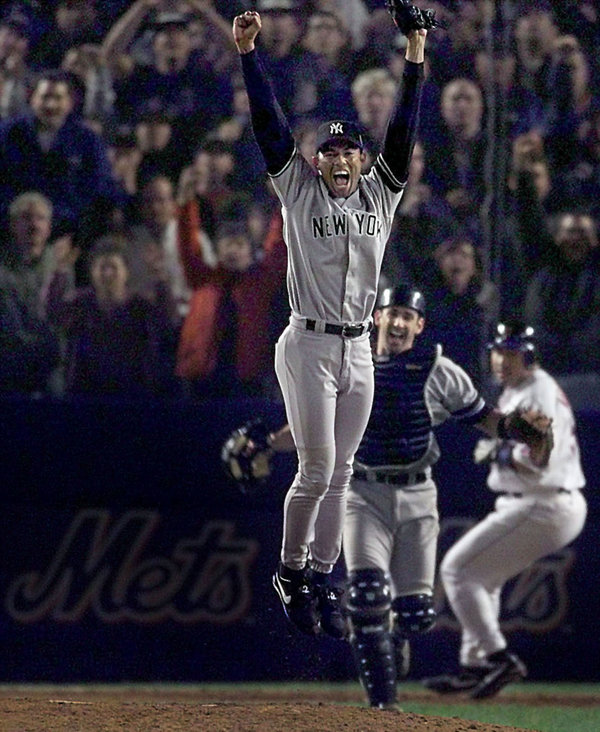 Baines, who collected most of his 2,866 hits with the Chicago White Sox, and Smith, who spread his 478 career saves among eight teams, were elected by the veterans committee.

Rivera is the only one of the new inductees who won a championship — and he won five of them. Bernie Williams, who will perform the national anthem on jazz guitar before Sunday’s ceremony, caught the final out of the fourth, against the Mets in 2000. Rivera never doubted that Mike Piazza’s deep drive would nestle in Williams’s glove in center field at Shea Stadium.

“I was sure all along because he hit it to the deepest part of the field,” Rivera said. “Second of all, as a pitcher, we know when you hit the ball good, in the right spot. He was able to extend, but not that much. If he were to pull it, maybe. Or to right field, maybe. But not to center field. Not to center field.”

Rivera was not always perfect, of course; a year later, he blew the save in Game 7 of the World Series against the Arizona Diamondbacks. But his postseason earned run average, 0.70, is the best in major league history. And his regular-season E.R.A., 2.21, is the best by any pitcher born in the last 130 years, with a minimum of 1,000 innings.

Every plaque in Cooperstown is the same size, from Hank Aaron’s to Hank O’Day’s, but some attract a lot more attention from the 300,000 or so fans who visit the Hall each year. Rivera’s, which will hang in a sunlit atrium with the other recent inductees, will be one of those.

“He was the best in the game and the best that ever closed games,” Mussina said. “And he did it for a long time and he did it with basically one pitch.”

Rivera — the second Hall of Famer from Panama, after Rod Carew — did not throw his signature cutter when the Yankees signed him for $2,500 in 1990. He discovered it seven years later while playing catch with a teammate, Ramiro Mendoza, in Detroit (Motown, indeed). Its movement scared Rivera, at first, because he was not trying to produce it and could not control it. He solved that problem quickly.

But while Rivera can never be considered underrated — not with 100 percent of the vote — his thorough mastery of one pitch undersells his skill as a craftsman. Sergio Romo, the longtime reliever who now pitches for Miami, talked a few years ago about meeting Rivera at the 2013 All-Star Game. Rivera complimented Romo on his sweeping slider, but reminded him that he could not survive with one pitch.

“He always found a way to get guys off it, to go away, open it up, come inside, knock a guy off, throw something slow that he doesn’t typically throw and then all of a sudden go right back to it,” Romo said. “The things that he said, literally watching why he was so effective — he protected that cutter the whole time and nobody knew it.”

Rivera was famously generous with his wisdom. In 2008, at another All-Star Game, he counseled Halladay, then with the division-rival Toronto Blue Jays, on the proper finger placement on the cutter. Rivera’s teammates fined him in kangaroo court, but he did not care.

“I don’t regret moments like that or times when I was able to teach others,” Rivera recently told WFAN’s Sweeny Murti, “because we need to share.”

That tip, and Halladay’s ability to apply it, became another gift Rivera gave to the game. Halladay used the cutter to produce three more elite seasons and several indelible moments with the Philadelphia Phillies, including a perfect game and a playoff no-hitter.

All the while, Halladay kept a practice ball in his locker with a tracing of Rivera’s grip in ballpoint pen. Whenever he slipped back to old habits, he would grab that ball and right himself.

Halladay’s widow, Brandy, found the ball and lent it to the Hall of Fame for her husband’s display case. It is up on the third floor now, far from the gift shop, a symbol of a gesture that is truly priceless.