The TOWIE star is currently expecting her first child, but has revealed she faced heartbreak early on in her pregnancy. 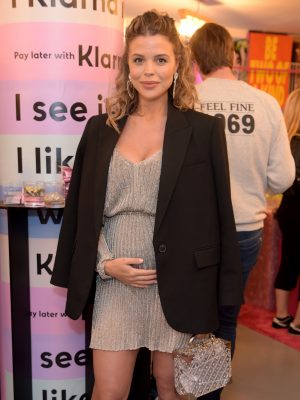 Speaking to OK! Magazine, the former reality TV star revealed that she didn’t know she was expecting twins until she miscarried one of them.

After starting to bleed during the night, the 28-year-old went to the doctor the next day and was shocked to find out that she was expecting twins.

The doctors later confirmed she had lost one of the babies, an identical twin. Referred to as the ‘vanishing twin syndrome’, it’s actually quite common.

The mum then she spent about three months grieving the loss of one of the babies, and even blamed herself for the miscarriage.

‘It wasn’t until Danny said: ‘Chloe, you’ve got to snap out of this, you’ve got one healthy baby, not everyone gets this.’

“I was supposed to be happy but I was sad because I’d lost one. I was happy some days and sad others. I couldn’t be totally happy. After three months, though, I said to myself: ‘Right, you’ve got to sort yourself out.’”

Chloe and Danny announced they were expecting their first child back in May.

Alongside a sweet picture of the couple and the sonogram, she wrote: ‘Half me, half you ♥️.’

Baby shower overload 🌸 BIG thank you to my mum & sister for everything you do for me & giving me a such magical day. I couldn’t be without yous. Love you 🦋

She had her baby shower recently, and shared the beautiful photos on her Instagram. She wrote alongside the pics: ‘Baby shower overload 🌸 BIG thank you to my mum & sister for everything you do for me & giving me a such magical day. I couldn’t be without yous. Love you 🦋’.

Not long now until the bubba is here!

From our sister site GoodToKnow.