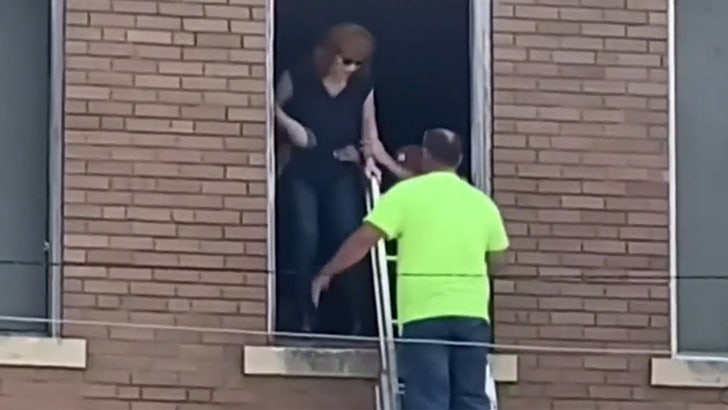 Reba McEntire got the cat-stuck-in-a-tree treatment from a fire department in Oklahoma — except the trunk she’d gone up was actually a pretty ancient building with a caved-in staircase.

The country singer was one of 7 people rescued Tuesday by authorities in Atoka, OK. Reba and a pal were touring a historic site — the building’s at least 100 years old — when it partially crumbled inside.

Emergency Management Director Travis Mullins tells us … the building was in the middle of being renovated when this happened — the dilapidated stairs were already scheduled to be replaced. No word on why anyone was actually let inside, if that was the case.

Anyway, Reba and co. were, luckily, just on the second floor when the stairs collapsed … leaving them stuck up there, and requiring an old-fashioned ladder rescue. Video of the incident shows firefighters safely leading her and others down through the window.

Reba and co. were mostly okay … one person was transported to a hospital with minor injuries. After the fact, officials said that not only did the 2nd story stairs topple down, but the ones leading up to the 3rd story did as well … trapping others higher up at the time.

Obviously, this could’ve been much worse than it turned out … especially for Reba. Indeed, she is a survivor.