AceShowbiz -Sir Rod Stewart has led the tributes to Jeff Beck on social media. After the influential rock guitarist “peacefully passed away” on Tuesday, January 10, aged 78, after contracting bacterial meningitis, Rod takes to Twitter to pay a heartfelt tribute to his former bandmate.

The 78-year-old star, who performed alongside the guitarist in The Jeff Beck Group in the late 60s, wrote on Twitter, “1/2 Jeff Beck was on another planet . He took me and Ronnie Wood to the USA in the late 60s in his band the Jeff Beck Group and we haven’t looked back since . 2/2 He was one of the few guitarists that when playing live would actually listen to me sing and respond . Jeff, you were the greatest, my man . Thank you for everything . RIP (sic)”

Fellow The Rolling Stones star Ronnie Wood has described Jeff as “one of [his] band of brothers”. Ronnie, 75 – who was part of the Jeff Beck Group in the late 60s – said, “[prayer emoji] Now Jeff has gone, I feel like one of my band of brothers has left this world, and I’m going to dearly miss him. I’m sending much sympathy to Sandra, his family, and all who loved him. I want to thank him for all our early days together in Jeff Beck Group, conquering America. (sic)”

Elsewhere, Gene Simmons of KISS has hailed Jeff as a unique guitarist. Gene wrote on Twitter, “Heartbreaking news to report the late, great Jeff Back has sadly passed. No one played guitar like Jeff. Please get ahold of the first two Jeff Beck Group albums and behold greatness. RIP. (sic)” 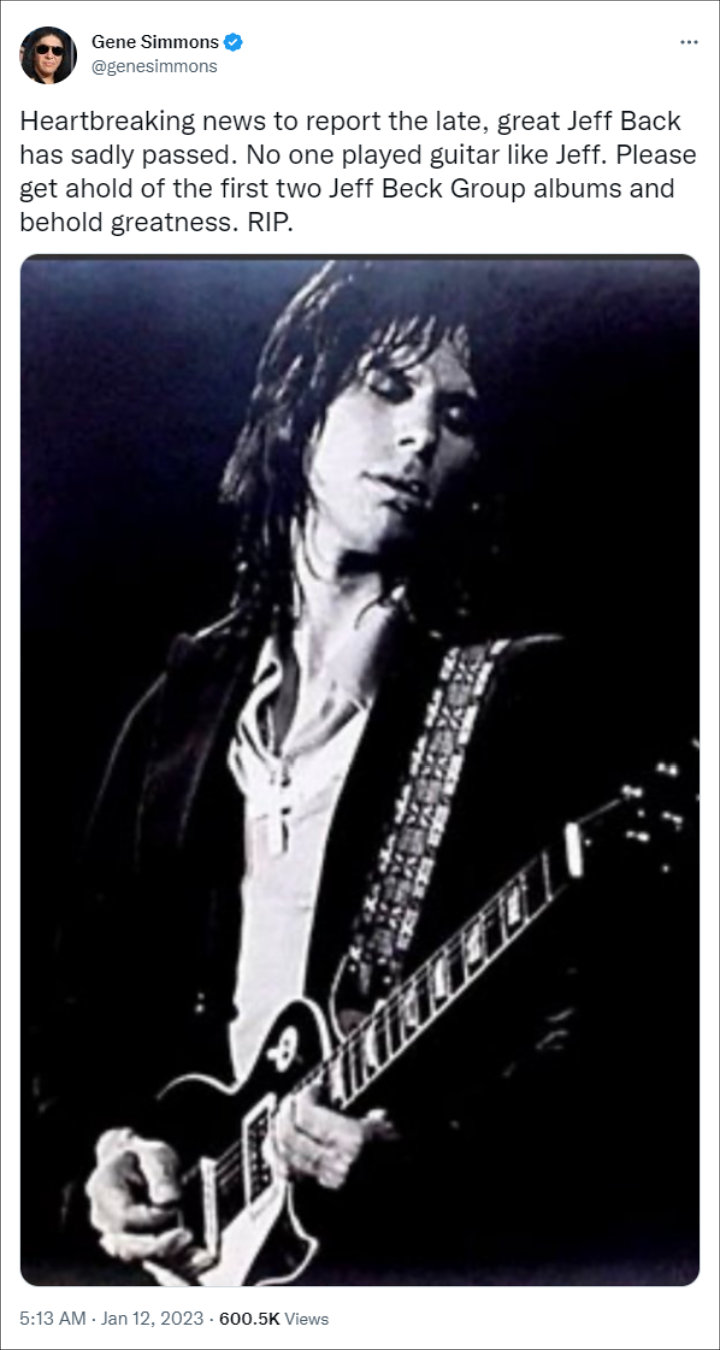 Meanwhile, The Beach Boys co-founder Brian Wilson has described Jeff as a “genius guitar player”. The 80-year-old star said, “I’m so sad to hear about Jeff Beck passing. Jeff was a genius guitar player, and me and my band got to see it close up when we toured with him in 2013. One of the highlights we did was ‘Danny Boy’ – we both loved that song. Love and Mercy to Jeff’s family. (sic)”