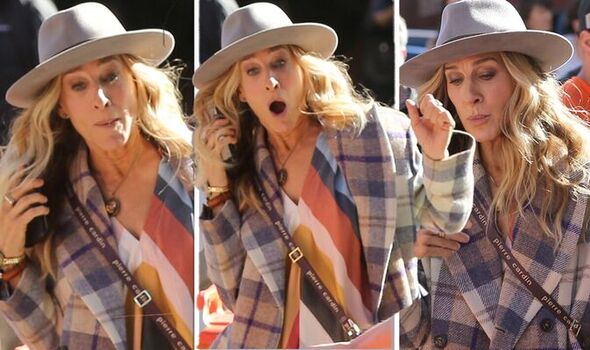 While filming a scene for the second series of the Sex and the City sequel, And Just Like That…, Sarah Jessica Parker was spotted nearly bumping into a cyclist, who then dodged out of the way and comically fell into the curb.

Sarah Jessica Parker, 57, was pictured looking horrified as she narrowly avoided bumping into a cyclist whilst in New York City.

The photos were taken while the actress, best known for her role in Sex and the City, was filming for the sequel series And Just Like That…, the first series of which came out in 2021.

The actress, who was dressed in a long plaid coat, stripy jumpsuit, trilby hat and bright blue heeled boots, was pictured looking shocked as she saw the cyclist crash into the curb, before rushing over and kneeling down to check he was okay.

The star was then seen putting her hand out to comfort the rider before taking the bike herself and wheeling it off the road.

The staged incident will feature in the next series of the HBO Max television series And Just Like That… which sees Sarah usurp her role as the beloved Carrie Bradshaw. The sequel was created by Darren Star, and also stars Cynthia Nixon, Kristin Davis and Mario Cantone.

As part of the scene, Sarah was seen tending to the cyclist. Bending down to the curb and stretching out her hand to check to see if he was okay. Doing their best acting the cyclist was perched on the curb with his head down while the actress tended to him.

Back as one of her most famous characters, Carrie Bradshaw, Sarah looked glamorous in a long plaid coat and brown trilby hat. The neutral colours of her outfit were complimented by her stripy jumpsuit which consisted of seasonal colours white, brown, orange and yellow.

To complete the Carrie Bradshaw look, Sarah was wearing bright blue boots with cutouts all up the front. The outfit as a whole was very autumnal and matched the season in New York City where the show is filmed and set. Sarah even gave the boots their own post on her Instagram stories, tagging the designer Duchess Gardini Shoes.

After filming the scene Jessica was filmed standing next to some of the crew, who had on headphones. The star’s long tresses were styled in a loose wave and came down from under the trilby hat.

Sarah Jessica Parker is known for her bold style

In a post to her 8.5 million Instagram followers, Sarah always shows off her bold and glamorous style. Posing on a rather dull-looking New York street, Sarah stood out in a bright frischa-coloured dress with matching accessories. With slicked-back hair, the star captioned the image: “Dateline Bryant Park. NYC. Mono. Chrome.”

Posting the script for episode 201 on her Instagram page, excited fans flocked to the comments section to express how eager they are for the show’s return. User Matin commented: “YESSSS CANNOT WAIT,” in full capital letters, and Ashley Longshore added: “And just like that…. I got real excited!!!!”Q