Products featured are independently selected by our editorial team and we may earn a commission from purchases made from our links; the retailer may also receive certain auditable data for accounting purposes.

Almost every TV available right now has some form of “smart” features, which allows it to access popular streaming services like Netflix and Hulu. These built-in apps work OK, but they’re probably not going to get updated often, and it’s up to the TV manufacturer to release additional ones when new streaming services like Disney+ and HBO Max pop up.

Some TV makers have solved this problem by partnering with Roku, a company who has gained a lot of attention by offering standalone media streamers. Roku TVs have the same interface and feature set as the company’s streaming hardware, including access to an app store that’s refreshed regularly. I’ve used a Roku TV regularly  for several years, and have found it easy to navigate. Roku also pushes regular software updates software to improve performance and stability, even on TVs that are several years old.

If you’re a big fan of streaming services, and want a smart TV that’s intuitive to use, a Roku TV is an excellent choice.

What Are the Best Roku TVs?

There are many factors to consider when choosing the best Roku TVs for you; below are the most important ones, which we considered while we were researching this list.

Size: Roku TVs are available in a wide range of sizes, and our guide features sets between 32 and 55 inches. Our largest TV recommendation is also available in a 65 inch size, which is great if you have space for a big home theater.

Resolution: The Roku TVs in our guide run the gamut between 720P (HD) to 4K (Ultra HD). Each set will produce a clear image, but the higher resolution Roku TVs will have increased fidelity, and support for additional features like HDR (High Dynamic Range), which increases color accuracy.

Inputs: A TV’s inputs (commonly called ports), are used to connect gadgets like game consoles to your set. All of the Roku TVs in our guide have at least two HDMI ports, which is the most commonly used input available right now. 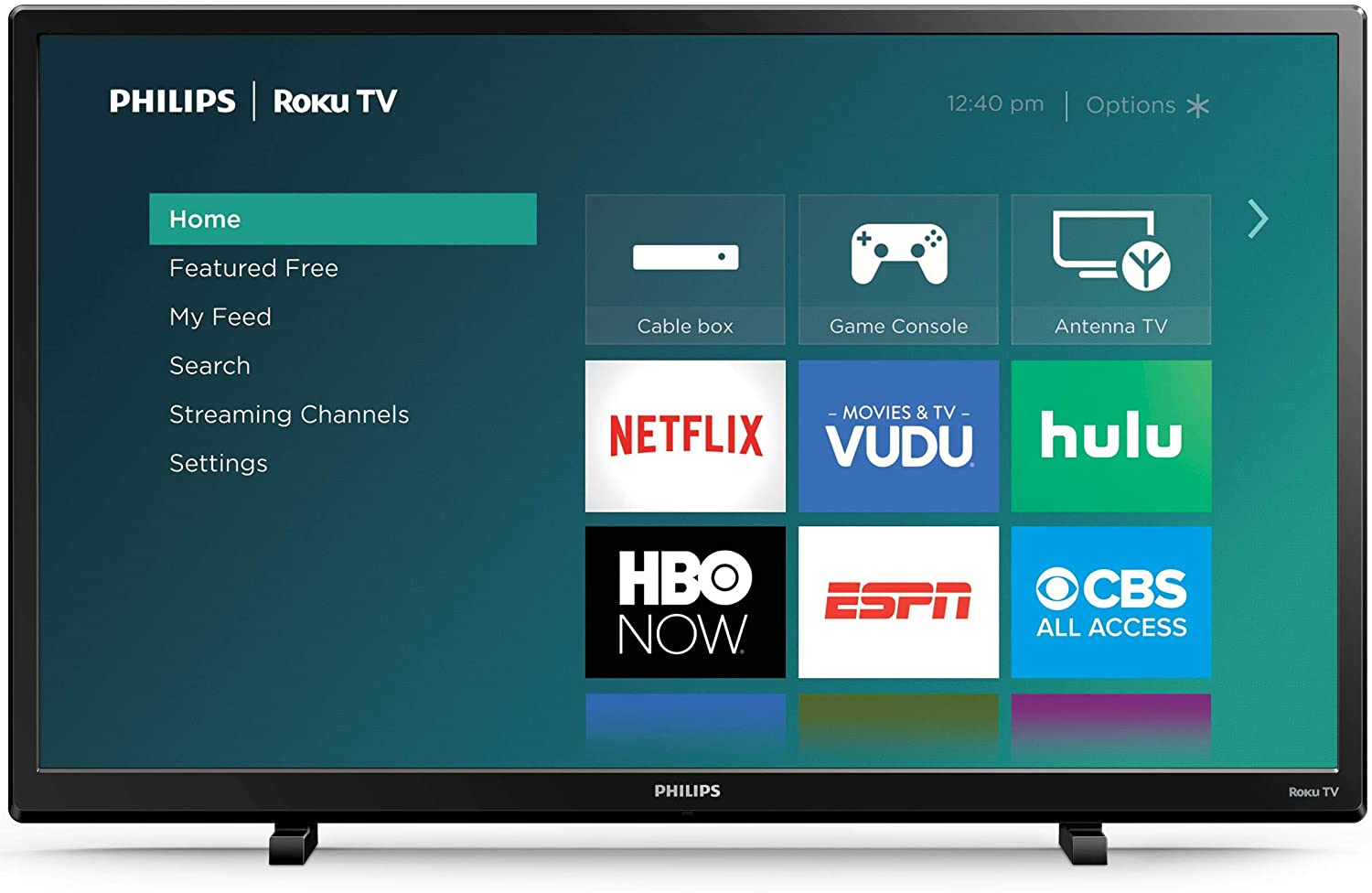 Philips’ Roku TV is our entry-level pick, but it has many of the same features as the higher-end sets we recommend.

At 32 inches it’s the smallest Roku TV in this guide, but that’s still a reasonable size for a bedroom or smaller living room. It has a maximum resolution of 720P, which is a fair bit lower than 4K, but the difference isn’t as stark on a smaller TV. At this size it’d be pretty hard to tell the difference between 720P, 1080P, and 4K.

In terms of ports the Philips outfitted this set pretty well: It has two HDMI inputs, one set of RCA (red, yellow, and white) jacks, a USB port, a coaxial (cable) jack), and an optical audio out. That last one can be used to connect this TV to a sound bar, which would be a major upgrade over its built in speakers.

If you don’t have too much space, or want a secondary TV in a guest bedroom or office, Philips’ 32 Inch Roku TV is a great choice. It has access to all the same apps and software updates as every other Roku TV, just in a smaller package. 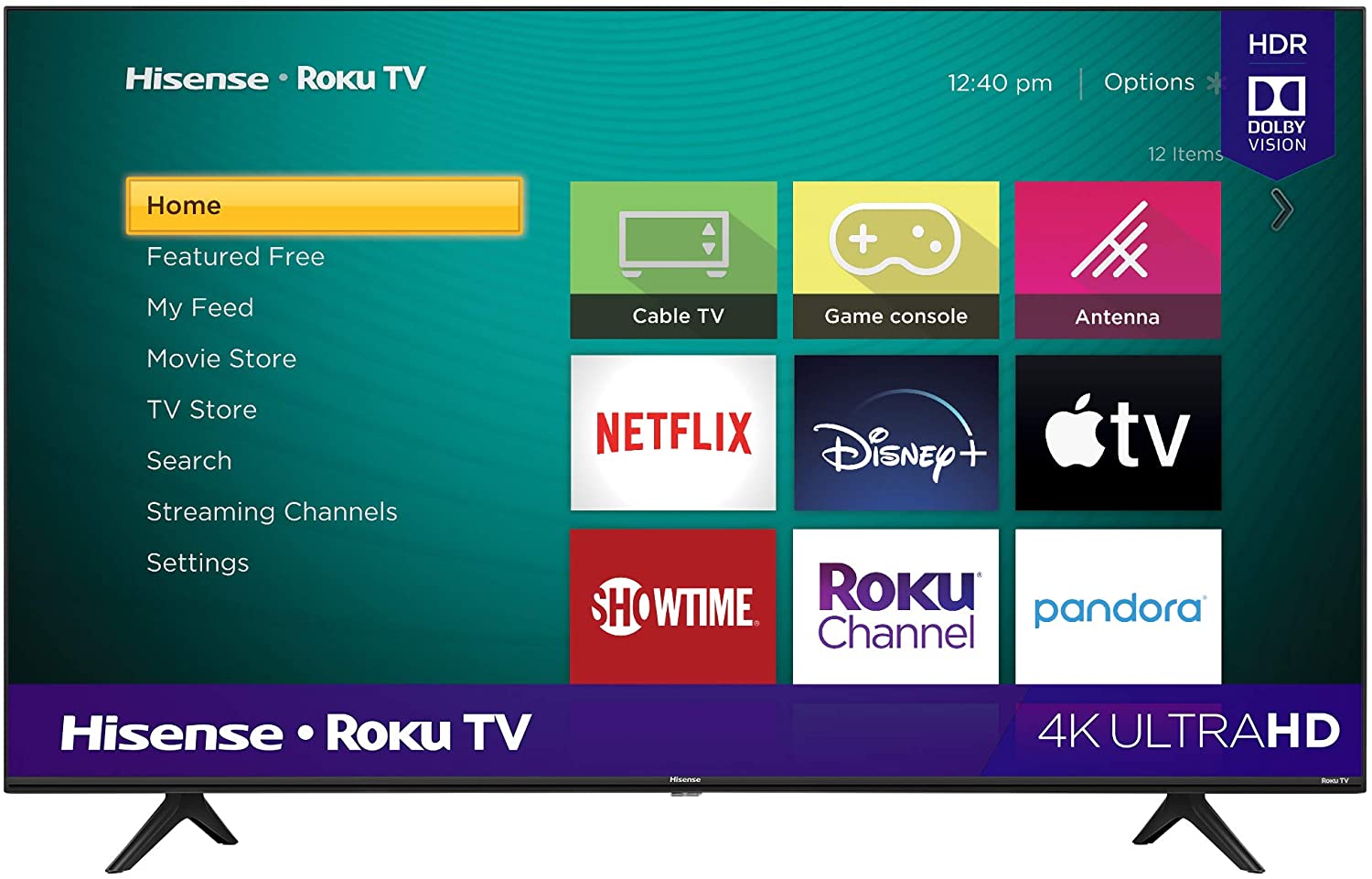 Hisense’s Roku TV is full of extra features that make it an excellent fit for your living room or home theater.

Its 50 inch screen and 4K resolution will produce a big, clear picture (provided you’re streaming 1080P or 4K content). It supports Dolby Vision HDR, which will make colors and shadows look a lot more realistic, and a 10W (watt) speaker system that Hisense says can simulate surround sound. This may be true, but it’s still a good idea to hook up a sound bar if you’re serious about sound quality. Finally, Hisense’s Roku TV has Bluetooth built in, so you can wirelessly stream music to it from your phone, tablet, or computer.

This Roku TV has three HDMI ports, two USB ports, one set of RCA inputs, an optical audio output, Ethernet port, RF antenna input, and headphone jack. That’s enough ports to hook up a lot of gadgets, including an HDTV antenna that may allow you to watch certain broadcast channels (CBS, ABC, NBC, Fox, PBS) for free depending on your location.

Although this Roku TV is smart in the sense that you can stream videos from popular services, it can also be made a greater part of your smart home. Hisense’s Roku TV can be connected to an Amazon Echo device, which lets you control its main functions (volume, inputs, etc) using your voice. You can also use ask Alexa, Amazon’s smart assistant, to stream a live feed from your smart security camera onto this Roku TV.

If you want a large, feature rich Roku TV with the option to make it even better with a simple upgrade, Hisense’s set is the way to go. 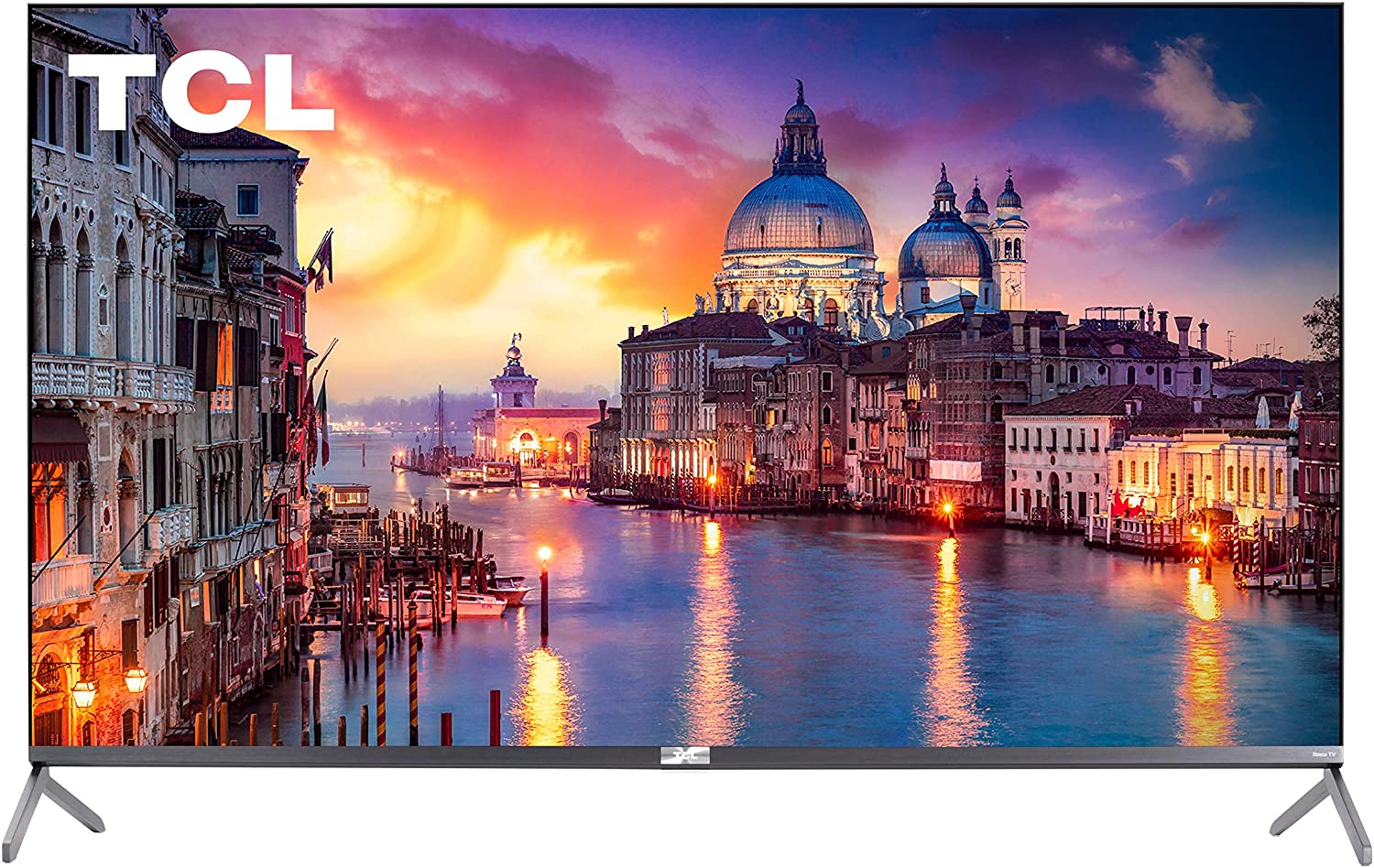 TCL’s 6-Series Roku TVs have gotten near universal critical praise, and are widely considered among the best TVs to get right now.

The 6-series TVs are available in two sizes: 55 inches and 65 inches, but we’re recommending the smaller one because it’s more likely to fit in a living room environment. Either size would be great if you’re setting up a home theater system. TCL’s TV has a resolution of 4K, and supports Dolby Vision HDR for improved color and shadow reproduction. One of the features that sets it apart is its “contrast control zones,” which allow the TV to intelligently brighten and darken certain parts of the screen depending on what’s happening on screen. The result is less light bleed, which can make the color black look gray. This is immediately noticeable when you’re watching TV shows, movies, or video games set at night, and dulls down their realism.

I’ve watched movies and played video games on a TCL 6-Series Roku TV myself, and definitely noticed a difference in its overall video quality compared to other TVs I’d seen. The fireworks scene at the beginning of The Lord of the Rings: Fellowship of the Ring was extremely vivid, even though the film wasn’t filmed with HDR support in mind. I was especially impressed by the contrast between light and dark sections of the screen, so I can say with confidence that “contrast control zones” actually work.

TCL says this Roku TV enters a specific “Game Mode” when it detects you playing video games, but I didn’t see a big difference between that setting and the default one. It may be more apparent when you play fast-paced first person shooters rather than methodical Japanese role playing games.

This Roku TV features four HDMI ports, one USB port, one RF port, an optical audio out port, an Ethernet jack, and a set of composite inputs. You won’t have a hard time connecting your tech to this TV, but the only accessory we recommend strongly is a sound bar. TCL’s 6-Series Roku TV only has one minor downside: it wasn’t designed to be integrated into a smart home. You can’t connect an Amazon Echo device to it, which is something to consider if you’re really into smart home tech.

If you want a deluxe Roku TV whose video features and generous amount of inputs put it a step above the rest, TCL’s 6-Series is the obvious choice.