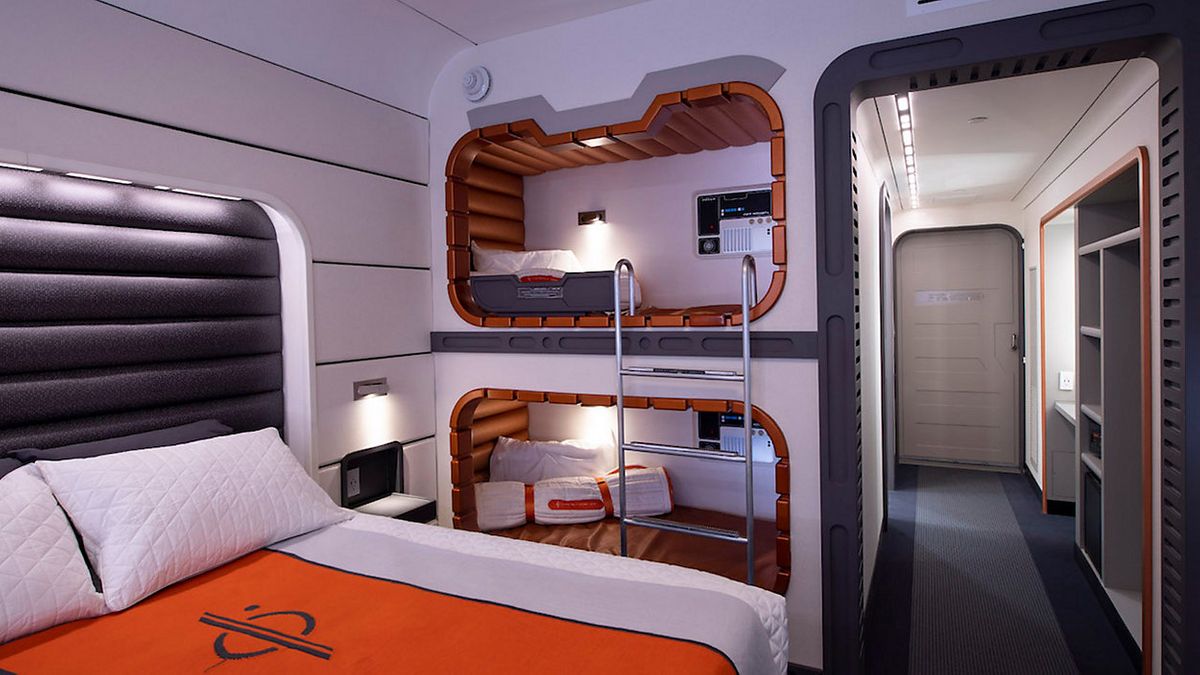 The buzz about the new Star Wars’ Galactic Starcruiser getting ready to take off at the Walt Disney World Resort in Orlando is approaching warp speed.

No doubt that’s because avid fans of the space franchise have long imagined themselves as part of the iconic Star Wars story.

Well, this new take on the typical hotel experience promises to make that dream come true.

No exact opening date has been set, possibly due to Disney putting more Covid guidelines and other coronavirus-safe factors in place. However, the Mouse House has set some time in 2021 as the launch.

So, starting one day next year, travelers will be able to take advantage of the imaginative craft operating in a galaxy far, far away yet close enough for us mere mortals to enjoy.

Of course, the rooms aboard the ship will be relatable to Star Wars aficionados but should also enchant everyday sojourners.

That said, Disney provided new photographs like the one above on Monday. These images serve to enlighten future Galactic Starcruiser guests as to what their temporary digs will be like.

These accommodations appear to be compact, with this modular example ideal for visitors traveling with kids.

A queen-sized bed and a bunk bed that sinks into a wall pod complete the sleeping arrangements.

Among the room’s amenities is a mounted screen. This screen features ordinary television or extraordinary ways to comprehend your outer space trajectory. Take your pick.

The spacey outpost will also have something a host of hotel guests crave: amazing views!

The same is true for all the windows throughout the hotel.

Checking into a spacey experience at the Galactic Starcruiser

To get your assigned quarters sorted out, the Star Wars-themed terminal will offer efficient check-in stations.

After that, visitors will enter small launch pods used to blast them into space. As that happens, guests will be invited to watch themselves leave our world behind.

Once there, the Atrium calls.

This lobby alternative is where guests and crew can mingle with ease.

Indeed, even before officially opening, Chewbacca and a bunch of stormtroopers were spotting interacting with mere mortals on the scene — or, at least, in a rendering of that scene.

Another planned communal space on the Galactic Starcruiser is The Silver C Lounge. An out-of-this-world libation station, this chill place is where passengers of all ages will be able to schmooze while sipping on a drink of their choosing.

This is an outrageous outpost that lurks in the Black Spire. A remote trading port, everyone from smugglers to adventurers will be attracted to this port village on the planet Batuu, which is otherworldy in all sorts of ways.

Then there are the never-say-die attractions and shops.

From the latter, know you’ll be able to buy and then wield your own personalized lightsaber.

You will also be able to sit in wonderment as a 3D space flight to all sorts of Star Wars destinations unfolds in front of your eyes.

The Guardians of the Galaxy: Cosmic Rewind – a so-called storytelling rollercoaster — is a new attraction getting ready to invite explorers to rotate at every angle. They’ll also be part of something unique: A reverse launch.

May the force be with you. Indeed.