Kicking off this year’s MTV Video Music Awards, Madonna made her entrance in an ensemble that immediately got Twitter talking.

Opening up the awards show, she stepped out on stage in a black trench coat over a leather puff-sleeve bodysuit and matching black hat. “And they said we wouldn’t last. But we’re still here, motherf–kers,” she said. “Happy 40th, MTV! Welcome to the 2021 MTV Video Music Awards.” Then she turned around to walk back into the wings, showcasing the bodysuit’s high cut backside and leading to a slew of reactions both IRL and online. 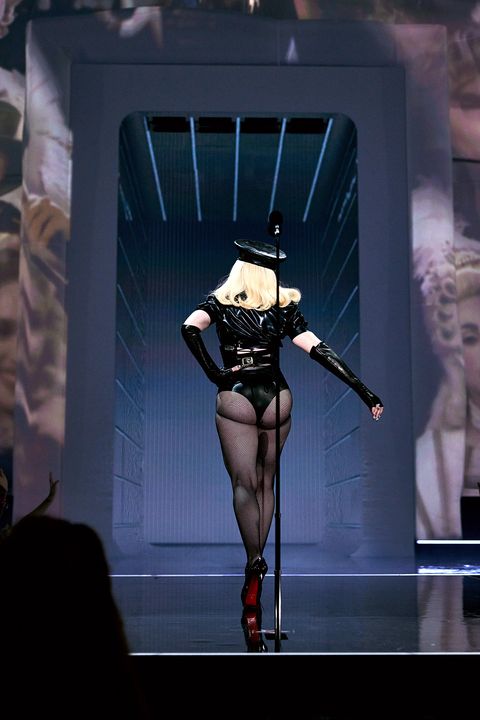 Madonna’s posterior has apparently been a point of controversy in recent years. In 2019, she appeared at the Stonewall Inn in New York City to perform her classic like “Like a Prayer.” Some fans felt her bum looked different, leading to Twitter debate over whether she received implants.

In response, Madonna posted a somewhat cryptic message to Instagram. “Desperately Seeking No Ones Approval………………😂,” she captioned a photo of herself. “And Entitled to Free Agency Over My Body Like Everyone Else!! Thank you 2019 🎉🎉🎉! Its Going to Be an amazing Year!! 🔥🔥🔥! #2019#freedom #respect #nofear#nodiscrimination.”

In light of these events, it seems only natural that Twitter would have a lot to say over her most recent eye-catching look. Read on to see some of the best responses to Madonna’s VMA’s outfit ahead.

Madonna very much serving “and why aren’t you in uniform” #VMA #VMAs pic.twitter.com/CCkuZrcm4s

madonna walking away after her opening #vmas pic.twitter.com/tnp7EHNoVq

madonna at the vmas was like “chill, lemme leave now” #vmas pic.twitter.com/qIsxbMiZct