In 1964, Donald Judd, the artist and overlord of Minimalism, wrote that George Ortman’s relief works “are concerned with a new area of experience, one which is relevant philosophically as well as emotionally.” This was high praise for Mr. Judd, and Mr. Ortman’s “Against Abstraction,” at Mitchell Algus, was mounted to coincide with a Judd retrospective at the Museum of Modern Art. “Against Abstraction” shows, however, the profound influence Mr. Ortman had on New York art in the 1960s. 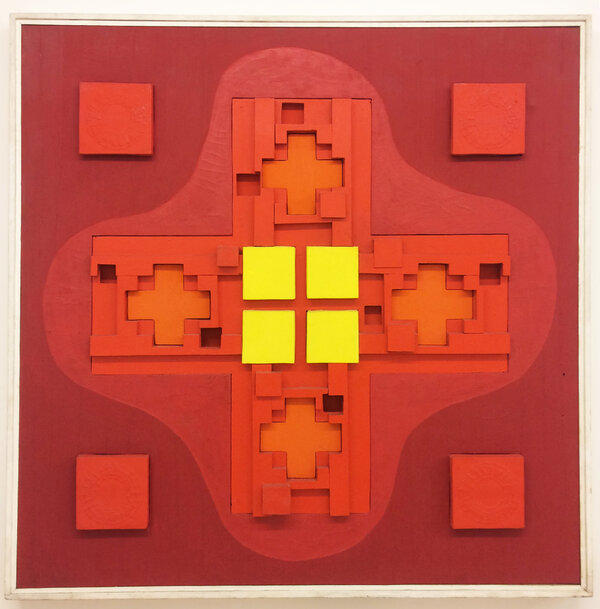 Works made with canvas and wood like “Tales of Love” (1959) and “Peace II” (1961) predate the abstract geometric objects — somewhere between paintings and sculptures — that would be associated with Minimalism. (In his famous 1964 essay “Specific Objects,” which laid out the terms of what critics and art historians would later call Minimalism, Mr. Judd deemed Mr. Ortman’s works “preliminaries.”) Their bright primary colors and linear arrangements reject the grand, often messy gestures of Abstract Expressionism and suggest the mathematical puzzles of information and game theory — which were on the rise at this time — or a later example that reached mass popularity: the Rubik’s Cube.

As the show’s title suggests, though, Mr. Ortman was not eternally committed to abstraction. Dense, intricate drawings from the late ’40s to shortly before his death in 2015 surge with fantastical flourishes and reveal his fascination with Hieronymus Bosch, Antoni Gaudí and Joan Miró. Mr. Judd called Mr. Ortman’s art after the early ’60s “finicky and retrograde,” but this exhibition happily embraces Mr. Ortman, beyond his basic geometric urges. MARTHA SCHWENDENER

It’s understandable if the first exhibition at Luhring Augustine’s new Tribeca branch is a little overfull. After all, Lucia Nogueira — who was born in Brazil in 1950 and made her art career in London before an untimely death, from cancer, in 1998 — had never had a solo show in the United States. Still, I might have left out a few sculptures and even the compelling little watercolors, because Nogueira’s found objects operate with such mesmerizing élan that just two or three pieces could have held the whole room.

Thirteen stiff, black, rectangular bags she found at a gardening center came perforated with what looked like eyeholes; arranged in a corner as “Mask,” they become a charming little coven of junior ghostlings. (Their presence turns the grounded electrical outlets behind them into faces, too.) Seven white trash can liners stretching out from the leg of a broken chair, in “Mischief,” are a magical kind of shadow brighter than the object casting them.

More often, though, Nogueira shrugs off such specific allusions. The first piece you see walking into the gallery is a shiny aluminum beer can bolted to the wall with some latex tubing hanging out of it. A whiff of gasoline from a few drops sprinkled in the can evokes Molotov cocktails; the yellowish-brown tube brings to mind a junkie’s tourniquet; and the whole composition looks like half a dozen different science projects, home liquor stills or industrial experiments you can’t quite put your finger on. All these associations come to mind, but none of them work. So you brush them away to reveal the simple, luminous mystery of physical being. WILL HEINRICH

The sculptures in Ruben Ulises Rodriguez Montoya’s first solo show, “Inside the Bowels of the Hoofed Beast,” look like creatures — or parts of them — almost as much as they do art. For example, the different pieces of the installation “Citlali_chimuela2.0 + My Socks and Delfina Hang There + Trenza” evoke bull horns, a dinosaur jaw and a snake. “44R” looks like it walked out of a movie about aliens.

The works, all from 2020, do contain animal parts, like horns and hides, but they’re just one element in a slew of materials found and gathered by the artist, including computer hardware, disposable razors, T-shirts, mariachi sombreros and twine from an illegal desert dump. He sews, ties and wires them together to create works that feel simultaneously improvisational and crafted.

In doing so, Mr. Montoya creates his own version of “rasquache,” a Chicano folk practice once described by the artist Amalia Mesa-Bains as “the capacity to hold life together with bits of string, old coffee cans and broken mirrors in a dazzling gesture of aesthetic bravado.” He also works in the lineage of artists making sculpture with found objects, like Daniel Lind-Ramos, Guadalupe Maravilla and Huma Bhabha, with whom he shares a penchant for sci-fi.

What’s especially promising about Mr. Montoya’s work is the way he cultivates a sense of mutation. Seamlessly merging natural and artificial castoffs, his sculptures seem unfixed, as if they were a strange, evolving byproduct of our current reality. JILLIAN STEINHAUER