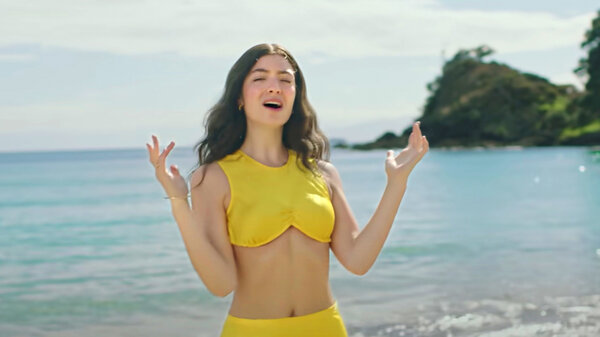 What is the song of the summer? The musicologist Nate Sloan and the songwriter Charlie Harding, who host the podcast “Switched on Pop,” aren’t in the business of issuing superlatives. They’re more likely to ask why some of this year’s contenders — songs by BTS, Lorde, Olivia Rodrigo, City Girls and more — resonate the way they do.

This question animates their “Summer Hits” mini-series, which continues their podcast’s project of explaining pop’s tricks in layman’s terms and providing context for musical trends. In one “Summer Hits” episode, Sloan, Harding and their guest Hanif Abdurraqib discuss the structure of Lorde’s ebullient “Solar Power” and parse the debate about originality that it has inspired; in another, they locate Olivia Rodrigo’s “good 4 u” within the long arc of punk and emo, with help from the critic Jessica Hopper. Their analysis may help you find new dimensions in these ubiquitous songs — even if you’ve already heard them a few hundred times.
OLIVIA HORN

The Pros and Cons of Being Virtual

In their efforts to stay relevant when the pandemic shut down live performance, many dance organizations barely paused before churning out new digital content. Danspace Project took a slower, more measured approach, focused on deepening long-term relationships with choreographers.

For the online season “Platform 2021: The Dream of the Audience,” five distinguished artists with close ties to Danspace were invited to create short films. The results — by Ishmael Houston-Jones, Joan Jonas, Okwui Okpokwasili, Eiko Otake and Reggie Wilson — remain free to view through Aug. 31 at danspaceproject.org/journal, alongside conversations with the artists, excerpts from their past work and poetic reflections by the writer Maura Nguyen Donohue.

Acknowledging what’s lost in an age of virtual dance, the series also highlights what is gained, like the chance to peer into spaces that might otherwise be hard to access. The films by Wilson and Houston-Jones, in particular, transport the viewer into St. Mark’s Church, Danspace’s East Village home, capturing details that even frequent visitors might be seeing for the first time.
SIOBHAN BURKE

In “Ni Mi Madre,” Arturo Luís Soria explores his relationship with his mother, Bete, a larger than life figure who believes Meryl Streep has nothing on her. Soria plays his mother, as she walks the audience through a ritualistic experience infused with disco and bossa nova.

Even though the piece could have veered into camp, Soria’s generosity as a writer and performer is such that he allows Bete to steal his spotlight. Rather than impersonation, the show, directed by Danilo Gambini, feels like an act of possession.

“Ni Mi Madre” is in previews from Saturday to Aug. 23 and runs from Aug. 26 to Sept. 19 at Rattlestick Playwrights Theater. Tickets are $35 during previews, $40 otherwise (certain dates are pay what you wish, and discounts are available; check rattlestick.org for details). All performances offer the option to attend in person or to livestream. “I’m excited that my family in Brazil, the Dominican Republic and across the U.S. will be able to see the show,” Soria said. His fabulous mother will be there on opening night.
JOSE SOLÍS

Finding Her Own Country

Julia Reyes, the aspiring writer at the heart of Steppenwolf Theater Company’s “I Am Not Your Perfect Mexican Daughter,” isn’t kidding when she uses that statement to describe herself. The rebellious 15-year-old daughter of Chicago immigrants, Julia (Karen Rodriguez) feels responsible for the accidental death of her more obedient older sister, Olga, whose final weeks remain mysterious.

An adaptation of the acclaimed novel of the same title by Erika L. Sánchez, this play was being performed in the Chicago company’s Steppenwolf for Young Adults series when the pandemic forced it to close. Working with Isaac Gómez’s script and the directors Sandra Marquez and Audrey Francis, Steppenwolf turned the production into a 110-minute audio version. Streaming free to schools, it’s available to the public through a $75 subscription to Steppenwolf NOW, a six-show virtual season that ends on Aug. 31.

Gritty, suspenseful and occasionally humorous (“I feel like an extra in a tampon commercial,” Julia says at her quinceañera), “I Am Not” includes profanity, mild drug use, sexual activity and a suicidal episode. But for adolescent audiences, it’s also a moving and absorbing journey of a girl who discovers that even imperfections can sometimes be strengths.
LAUREL GRAEBER

The fusion of classical composition with heavy metal dates back to some early works by Glenn Branca. That tradition hasn’t lost steam since Branca’s death in 2018, either. This month, John Zorn released a new album of pieces for his metal-adjacent group Simulacrum. (It bears the appropriately gothic title “Nostradamus: The Death of Satan.”)

Another exponent of this trend is the group Real Loud: an electrified chamber sextet of dual guitarists, bassists and drummers. That double-power-trio setup allows composers to keep a certain momentum going, even when decorating a piece with novel material. (Though, moniker aside, the band does not mandate loudness — or even thrashing textures.)

On its self-titled album, released in June on the New Focus imprint, Real Loud plays works by four composers (including Brendon Randall-Myers, a member of the group who has worked as part of Branca’s ensemble). The chosen composers’ approaches are anything but lock step in nature: Pascal Le Boeuf’s “Forbidden Subjects” makes the most of the group’s propulsive qualities, while Jenny Beck’s “Go in Secret” revels in more ambient realms.
SETH COLTER WALLS