“Portrait of a Young Man Holding a Roundel” dates to around 1480, and its sale is the art market’s biggest test of the new year. 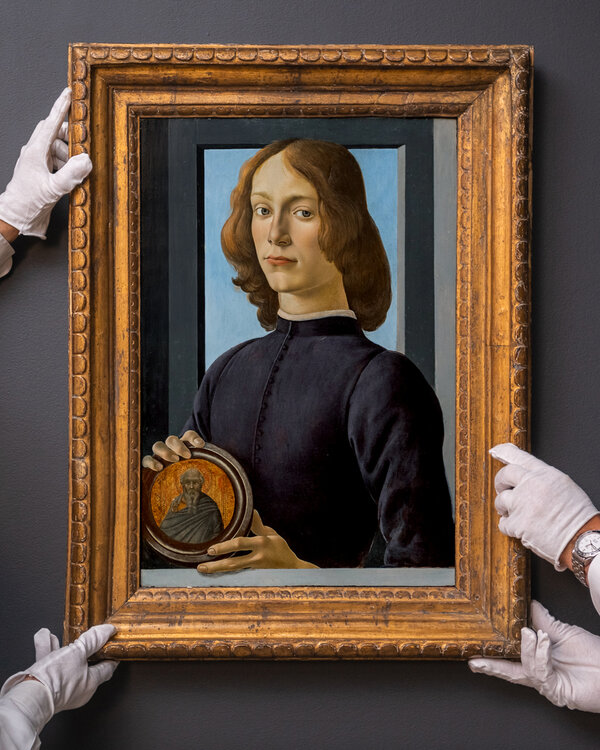 A small painting by Sandro Botticelli fetched $92.2 million at auction at Sotheby’s on Thursday, in the art market’s first big test of the new year.

The result, an auction record for the Renaissance painter, was also the highest price paid for an old master work since Leonardo da Vinci’s “Salvator Mundi” sold for $450 million in 2017. It also represented a windfall for the foundation of the billionaire Sheldon Solow, who had bought it for about $1.3 million in 1982. The proceeds from the sale may be used to establish a private museum in Manhattan.

“It’s a marvelous painting,” Marc Porter, chairman of Christie’s in the Americas, said this week. “It’s very attractive and seductive and undeniably rare. And the question for the market is whether this pursuit of extremely rare, appealing, commercial works of art will continue to attract a large number of bidders even in the depth of the Covid-19 emergency.”

For now, at least, the answer is affirmative. The bidding at the auction, which was livestreamed from New York, lasted just 4.5 minutes and drew only two competitors. The winning bid was placed by Lilija Sitnika, a London-based staffer who works with Russian clients. Sotheby’s declined to comment on the identity of the buyer. The work was estimated at more than $80 million. (The final price included the hammer fees.)

Sotheby’s spent four months on its marketing campaign, putting the painting on view in Los Angeles, London and Dubai and publishing an almost 100-page catalog, with scholarly essays and technical analysis. International art buyers have taken note. Robert Simon, an old master dealer in New York, said that a wealthy Hong Kong collector contacted him shortly after the Botticelli sale was announced in September. “I never heard of him,” Simon said. “He wanted to know what I thought of the painting.”

“There are some people of tremendous wealth,” Simon added, “and they are looking at paintings in terms of diversifying their wealth or just because they think it’s a great thing to own.”

The Botticelli, “Portrait of a Young Man Holding a Roundel,” dates to around 1480. Though the subject’s identity isn’t known, he’s believed to be a member of the powerful Medici family. His long fingers are gripping a round, gold-ground painting of a saint, attributed to the 14th-century Sienese painter Bartolomeo Bulgarini, which is inserted into the Botticelli canvas, according to Sotheby’s.

The insert and the subject’s youth are unusual for Botticelli, said Keith Christiansen, chair of the European paintings department at the Metropolitan Museum of Art, where the work had been on loan twice, most recently from 2013 to 2020.

“There are all sorts of speculations about his identity, but there’s no way to establish who he is,” Christiansen said in an interview. “He is certainly a member of a well-to-do family because those were the only people who had their portraits painted.”

The painting spent decades in museums. Before the Metropolitan Museum of Art, it was at the National Gallery of Art in Washington for 23 years, according to Sotheby’s provenance. While it was sold anonymously, during much of this time, it was also listed among the assets of the Solow Art and Architecture Foundation in tax documents.

But over the years, scholars have questioned the work’s attribution to Botticelli. It’s still unclear when the tondo of the saint was inserted, and the issue remains “perhaps the most debated question about the painting,” according to Sotheby’s catalog. Such doubts are common with old master paintings. What makes Botticelli more complicated is that the artist was completely forgotten for centuries after his death, said Mark Evans, senior curator of painting at Victoria and Albert Museum in London. The artist was rediscovered in the 19th century by pre-Raphaelite painters and has since become one of the most recognizable names in art history.

Only three “movable” Botticelli works — two paintings and a drawing — have documentation leading directly to the artist, said Evans, a co-curator of an exhibition, “Botticelli Reimagined,” for the museum in 2016. “Almost 90 percent of Botticelli’s oeuvre consists of attribution. What we know for sure about 15th-century paintings is often very little. In the case of Botticelli, almost nothing was remembered about him 200 years ago.’’

But the vagaries of scholarship often don’t stand in the way of astronomical prices, as was the case with the “Salvator Mundi,” which remains the most expensive work of art ever sold.

“It’s not religious,’’ she said. “It’s a handsome youth of high birth and manners. You don’t have to be a collector of old master painting to want to buy it. It appeals to the widest possible audience.”