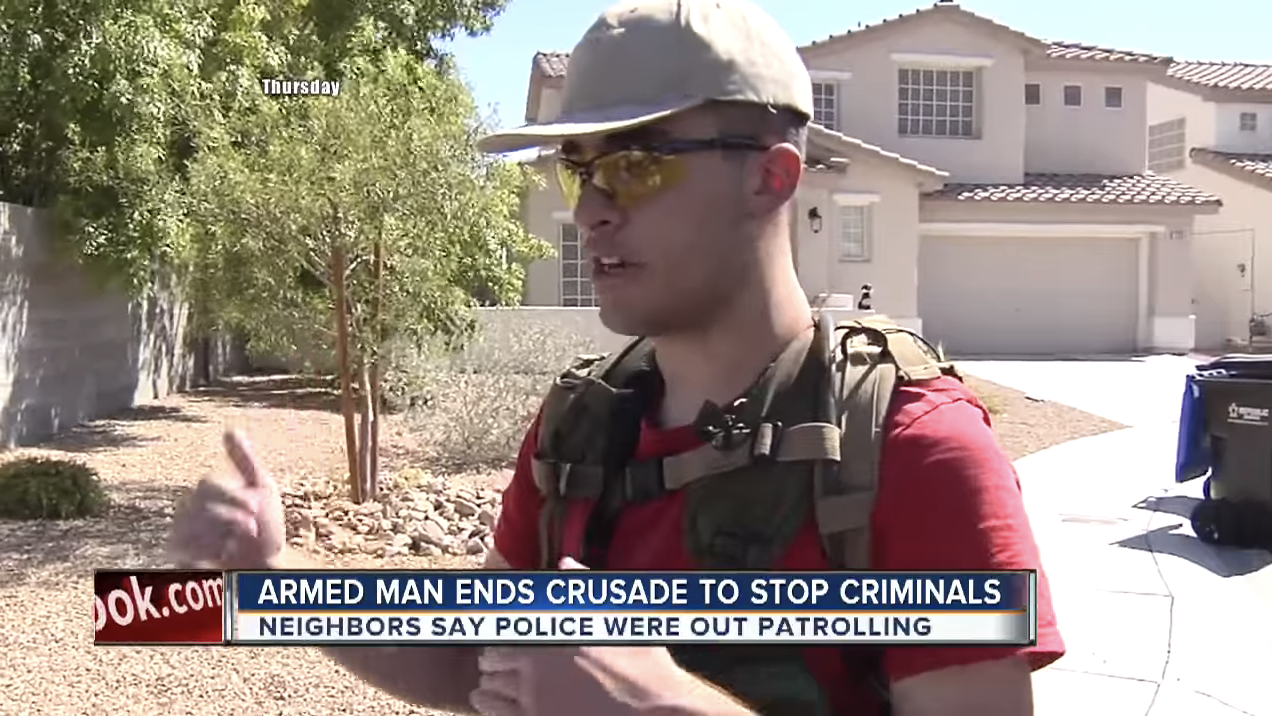 A Las Vegas man who once claimed he was protecting his neighborhood while patrolling on foot with an assault rifle has been arrested and charged with plotting to carry out an attack on a synagogue or LGBTQ bar in the city.

Climo told the FBI he had also been looking at creating an eight-man “sniper platoon” to conduct a shooting attack against Jews, court documents said, a plan he said he had been considering for two years. The 23-year-old also claimed he was trying to recruit a homeless person to conduct surveillance on a possible target, according to the complaint.

“Threats of violence motivated by hate and intended to intimidate or coerce our faith-based and LGBTQ communities have no place in this country,” US Attorney Nicholas A Trutanich said in a statement.

Climo faces multiple federal charges including one count of possession of an unregistered firearm. If convicted, he faces a 10-year sentence in federal prison and $250,000 fine.

The criminal complaint alleges Climo had been communicating with a white supremacist organization that encouraged attacks against the federal government, infrastructure targets, minorities, and members of the LGBTQ community.

Climo had already caused concern among his neighbors in 2016 when, in a video posted to his now-deleted YouTube channel, he announced his plans to patrol his Centennial Hills neighborhood with an assault rifle, four 30-round clips, and camouflaged packs.

“If there is a possibly very determined enemy, we have at least the means to deal with it,” Climo told a news reporter at the time.

Climo scrapped his plans to patrol the neighborhood after it was reported by local media, and said that he planned to join a typical neighborhood watch group.

The 23-year-old, who was employed as a security guard for Allied Universal, was suspended from his job Friday due to his arrest, a company spokesperson told BuzzFeed News. The company did not answer additional questions regarding Climo’s employment.

Four years ago, Climo posted a petition on Change.org aimed at then-Nevada Sen. Dean Heller, hoping to repeal the 1986 Hughes Amendment, also known as the Firearm Owners Protection Act, which banned civilians from possessing machine guns. The petition received 46 supporters before it was closed.

FBI agents with the Las Vegas Joint Terrorism Task Force began looking at Climo in April when, according to the complaint, they learned he was communicating with the white extremist group Atomwaffen Division.

Members of that group have been linked to at least five deaths since 2017, including a Tampa man who killed his two roommates and told police they were members of the group planning a large-scale attack. The suspect, Devon Arthurs, claimed he had distanced himself from the group.

According to court documents, Climo communicated with an FBI informant online, telling them that he had identified possible targets near Las Vegas, including police leadership, synagogues, an area in downtown Las Vegas with gay bars, and the headquarters for the Anti-Defamation League.

Authorities searched Climo’s home Thursday, where they found chemicals that can be used for improvised explosive devices (IED), as well as drawings for IED circuits.

Climo told FBI agents that he had experimented with making explosive devices for some time, and that he “harbors biases and hatred toward various racial and religious groups to include African-Americans, Jews, and Homosexuals.”

Climo also told agents he had joined the white supremacist group The Feuerkrieg Division, a splinter of Atomwaffen Division, because the group, “offered him glory and the ability to contribute his knowledge of constructing explosive devices toward a ‘righteous’ cause.”

He left the group, he said, because of their inaction.