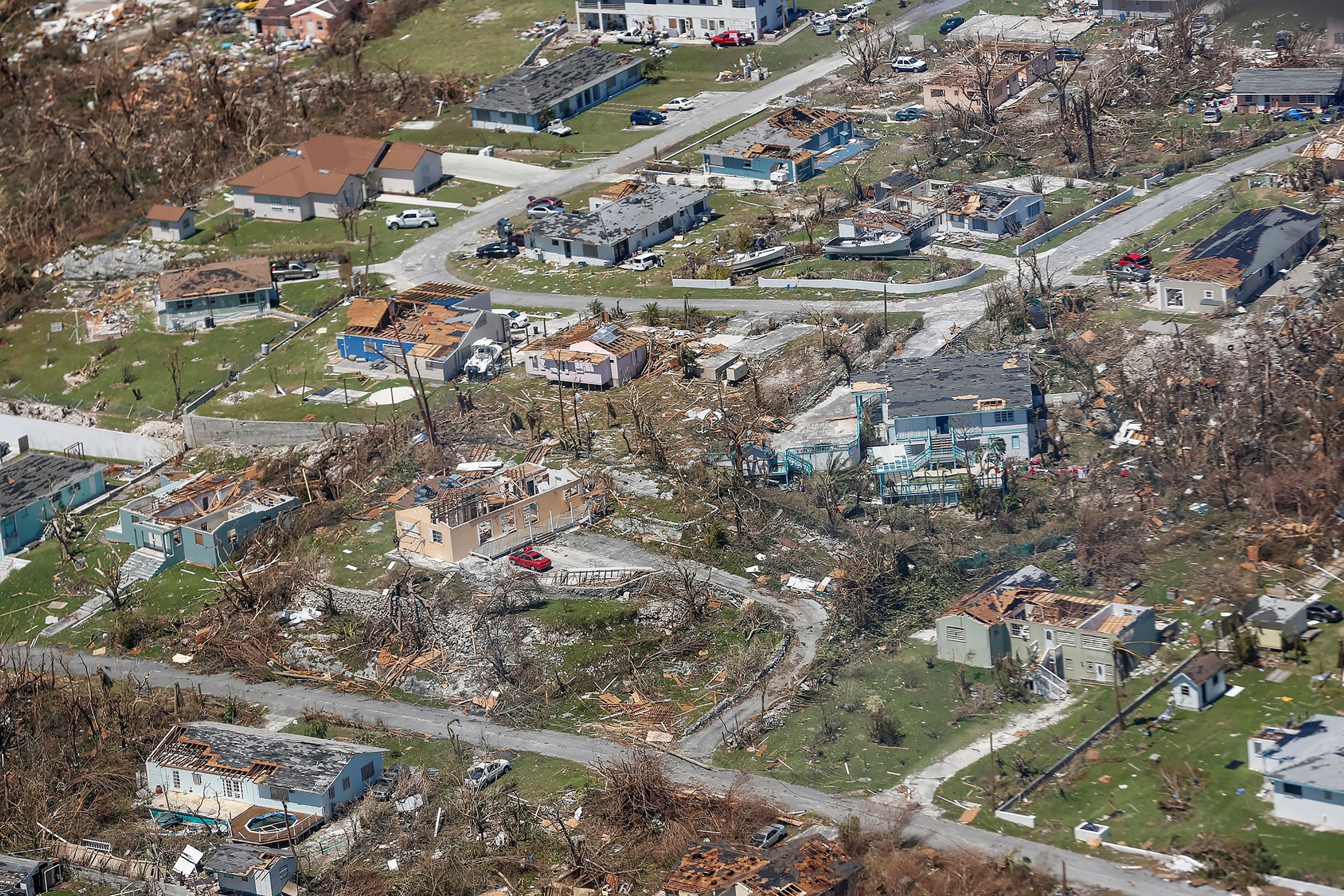 An aerial view of floods and damages from Hurricane Dorian on Freeport, Grand Bahama on September 5, 2019.

A US-bound ferry evacuating hundreds of Hurricane Dorian survivors from Grand Bahama announced that only Bahamians with US visas could depart the island — a contradiction of US policy that resulted in about 100 people, including children, getting off the ship.

Thousands lined up for hours to get on the ferry in the first place, one of the few ways to get off the ravaged island. The official death toll from the hurricane, which decimated the Bahamas as a category five hurricane, is currently 45, but is expected to rise dramatically.

After boarding the Baleària Caribbean ferry in Freeport, an announcement was made that all passengers without a US visa must disembark.

“Please, all passengers that don’t have US visa, please proceed to disembark,” said a ferry staffer, in a video filmed by Brian Entin, a reporter for Miami’s WSVN 7 News.

According to CBP guidelines, Bahamian citizens traveling from the Bahamas do not usually require a US visa as long as they have a clean police record and are only planning to visit for a short time.

Baleària Caribbean runs ferries between Grand Bahama and Fort Lauderdale, Florida, usually departing four or five times weekly for the two and a half hour journey. This was the first departure of the ferry since the hurricane.

Baleària Caribbean did not immediately responded to a request for comment.

But a passenger onboard said the ferry staff told him they’d were contacted by US Customs and Border Protection with the demand that passengers must have a visa.

“They just got a call from CBP and CBP told them that everyone that doesn’t have a US visa and is traveling on police record has to come off,” said Renard Oliver to WSVN, a passenger onboard the ferry.

Oliver was holding his baby girl in his arms as he explained that he needed to get off the ship because he was traveling with his Bahamian passport and a police record.

“At the last minute like this it’s kind of disappointing,” he told WSVN. “It’s hurtful, because I’m watching my daughters cry.”

Dozens of evacuees got off the ship after the announcement and were left on Grand Bahama island without electricity or running water. It is unclear exactly how many people disembarked the ferry.

However, CBP denied that they were to blame for the confusion on the Baleària Caribbean ferry.

A spokesperson told BuzzFeed News in a statement it “was notified of a vessel preparing to embark an unknown number of passengers in Freeport and requested that the operator of the vessel coordinate with U.S. and Bahamian government officials in Nassau before departing The Bahamas.”

It did not clarify if it had been notified of the vessel’s planned departure in advance, but seemed to criticize the company’s planning of the ferry trip.

The spokesperson said that CBP “requires transparent communication and planning for adequate resources to receive any arrivals.”

In an interview with WSVN, CBP Florida officers blamed Baleària Caribbean for not adequately coordinating with the US.

“I think they raised their [passenger] expectations without fulfilling the requirements, that if they had done that with us and worked with us, we would have been there to facilitate that process. However they didn’t,” said an officer.

“If those folks did stay on the boat and arrived, we would have processed them,” added another CBP officer. “They were not ordered off the boat by any US government entity.”

On the CBP website about the documents citizens from the Bahamas are required to have when attempting to enter the US, a section about hurricanes appears in bold font.

“Travelers should be aware that the U.S. Customs and Border Protection (CBP) Preclearance Station hours of operation may change with short notice, especially in emergency situations (such as hurricane watches.),” it reads. “Bahamians whose individual hurricane plans include travel to the United States should consider applying for U.S. visas well in advance.”

Amber Jamieson is a reporter for BuzzFeed News and is based in New York.