The question has lingered around the edges of the pop-culture ascendancy of Alexander Hamilton: Did the 10-dollar founding father, celebrated in the musical “Hamilton” as a “revolutionary manumission abolitionist,” actually own slaves?

Some biographers have gingerly addressed the matter over the years, often in footnotes or passing references. But a new research paper released by the Schuyler Mansion State Historic Site in Albany, N.Y., offers the most ringing case yet.

In the paper, titled “‘As Odious and Immoral a Thing’: Alexander Hamilton’s Hidden History as an Enslaver,” Jessie Serfilippi, a historical interpreter at the mansion, examines letters, account books and other documents. Her conclusion — about Hamilton, and what she suggests is wishful thinking on the part of many of his modern-day admirers — is blunt.

“Not only did Alexander Hamilton enslave people, but his involvement in the institution of slavery was essential to his identity, both personally and professionally,” she writes.

“It is vital,” she adds, “that the myth of Hamilton as ‘the Abolitionist Founding Father’ end.”

The evidence cited in the paper, which was quietly published online last month, is not entirely new. But Ms. Serfilippi’s forceful case has caught the eye of historians, particularly those who have questioned what they see as his inflated antislavery credentials.

Annette Gordon-Reed, a professor of history and law at Harvard and the author of “The Hemingses of Monticello,” called the paper “fascinating” and the argument plausible. “It just shows that the founders were nearly all implicated in slavery in some way,” she said. 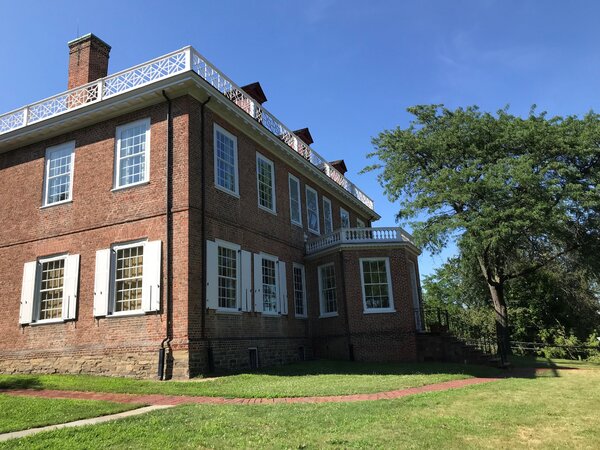 Joanne Freeman, a professor of history at Yale and editor of the Library of America edition of Hamilton’s writings, said that the detailed evidence remained to be fully weighed. But she said the paper was part of a welcome reconsideration of what she called “the Hero Hamilton” narrative.

“It’s fitting that we are reckoning with Hamilton’s status as an enslaver at a time that is driving home how vital it is for white Americans to reckon — seriously reckon — with the structural legacies of slavery in America,” she wrote in an email.

Ms. Serfilippi’s research “complicates his story, and in so doing, better reflects the central place of slavery in America’s Founding,” she said. “It also more accurately reflects Hamilton.”

The paper, he said in an email, “seems to be a terrific research job that broadens our sense of Hamilton’s involvement in slavery in a number of ways.” But he said he was dismayed at the relative lack of attention to Hamilton’s antislavery activities. And he questioned what he called her sometimes “bald conclusions,” starting with the claim that slavery was “essential to his identity.”

“I don’t fault Jessie Serfilippi for her tough scrutiny of Hamilton and slavery,” he said. “The great figures in our history deserve such rigor. But she omits all information that would contradict her conclusions.”

Hamilton married into the powerful Schuyler family in 1780. Slavery was common among New York State’s elite, and the Schuylers were some of the largest slaveholders in their area, with more than 40 people enslaved at the Albany mansion and another estate over the years.

In recent years, the mansion has done extensive research into “the servants” (as the enslaved people of the household were usually referred to), which has been incorporated into its tours. That the Schuylers were enslavers does not necessarily shock visitors, Ms. Serfilippi said. But the extent of Hamilton’s connections with slavery is a different story.

“There are some people who come here knowing he wasn’t exactly an abolitionist,” she said. “But there is surprise when I talk about the details of the research.”

Travis Bowman, the senior curator for the New York State Bureau of Historic Sites, who supervised the internal review of Ms. Serfilippi’s paper, said the relative lack of research on enslaved people in Hamilton’s household partly reflects the overall paucity of scholarship on Northern slavery. And the complexities of gradual abolition (New York’s gradual abolition law of 1799 phased slavery out over decades) makes tracking enslaved people, and clearly determining their status, particularly difficult.

“It’s a very odd period,” Mr. Bowman said. “Many people were granting half-freedom. If enslaved people walked away, they didn’t go after them.”

The idea that Hamilton stood apart from the institution goes back to the very first biography of him, by his son John Church Hamilton, who asserted in 1841 that his father “never owned a slave.”

That claim was flatly contradicted by Hamilton’s grandson, Allan McLane Hamilton. In his 1910 biography, he called it “untrue,” noting that Hamilton’s own account books included entries showing him purchasing slaves for himself and others.

But the idea of a resolutely antislavery Hamilton has endured, and has become more pronounced in recent decades. It’s certainly an image that appeals to contemporary readers seeking for a founding father relatively untainted by slavery.

In her paper, Ms. Serfilippi challenges what she suggests are persistent myths, starting with the much-repeated claim that his childhood exposure to the brutalities of slavery on St. Croix left him with what Mr. Chernow, in his biography, calls “a settled antipathy to slavery.”

“To date,” she writes, echoing other scholars, “no primary sources have been found to corroborate” the notion that Hamilton’s childhood instilled a hatred slavery.

Hamilton did criticize slavery at different points in his life, and compared with most white contemporaries held enlightened views on the abilities of Black people. He was also an early member of the New-York Manumission Society, founded in 1785 to advocate gradual abolition and encourage voluntary freeing of the enslaved. (A number of members, including Philip Schuyler, his father-in-law, were slave owners.)

But Ms. Serfilippi also notes documented cases of Hamilton consulting with legal clients on slavery-related issues. Hamilton would not likely have been hired for such work, she argues, “if he were known amongst his peers as having only abolitionist leanings.”

That Hamilton helped legal clients and family members, including his sister-in-law Angelica Schuyler Church, buy and sell enslaved people, has been noted by biographers. But whether Hamilton enslaved people in his own household is a murkier question.

Some modern biographers, Ms. Serfilippi notes, do address the question, if often briefly. In his biography, Mr. Chernow writes that Hamilton and his wife, Elizabeth, “may have owned one or two household slaves,” citing “three oblique hints in his papers.” But she offers a more definitive reading, arguing that a range of primary sources “prove Hamilton purchased enslaved people for himself.”

Her case rests in large part on notations in his cash books and in family letters. For example, in May 1781, six months after his marriage to Elizabeth, Hamilton wrote to George Clinton, mentioning waiting for a sum of money “to pay the value of the woman Mrs. H[amilton] had of Mrs. Clinton.”

Some historians, she writes, have read this as paying for the value of her labor. But Hamilton, Ms. Serfilippi argues, was clearly “exchanging money for the woman herself.”

She also cites a number of similar references in other letters, corroborated, she asserts, by information in the cash books. For example, in an August 1795 letter to Hamilton, Philip Schuyler refers to “a Negro boy and woman engaged for you.” In March 1796, Hamilton’s cash books record a payment of $250 to Schuyler for “2 Negro servants purchased by him for me.”

Ms. Serfilippi also cites several letters by Philip Schuyler referring to “maids” traveling with Elizabeth and the Hamilton children, at a time when Hamilton’s cash books, she argues, show no record of wages to maids — an indication, she says, that they were enslaved.

In another entry in the cash book, from June 1798, Hamilton records receiving $100 for the “term” of a “Negro boy.” That Hamilton could lease him out to another person — a common practice — “absolutely indicates that Hamilton enslaved the boy,” Ms. Serfilippi writes.

And the Hamiltons, Ms. Serfilippi contends, appear to have enslaved people up until the time of Hamilton’s death.

She points to a piece of paper included near the end of the cash book, giving an inventory of Hamilton’s property apparently made after his death in the duel with Aaron Burr in July 1804. The inventory lists his house (valued at 2,200 pounds) and his furniture and books (300 pounds). There are also “servants,” valued at 400 pounds.

Hamilton’s own inventory, which he made shortly before the duel, includes no reference to servants. But Ms. Serfilippi believes the posthumous inventory, drawn up to settle his affairs, is more likely to be accurate.

“The Hamiltons were in debt,” she said. “It would make sense to include everything within their possession.”

It remains to be seen if Ms. Serfilippi’s firm conclusions will be broadly accepted by scholars. To her, what’s at stake is more than just how we see Hamilton.

“When we say Hamilton didn’t enslave people, we’re erasing them from the story,” she said. “The most important thing is they were here. We need to acknowledge them.”