During the final days of her solo show at Kravets Wehby Gallery in Manhattan this past spring, the mixed-media artist Theresa Chromati had something to confess about her latest body of work. “I realized that you can’t hide from anything,” she said, staring up at the 2019 painting “We All Look Back At It (Morning Ride).” In it, a nude figure squats with her glittering, butterfly-adorned buttocks in the air and her unobscured face turned to look directly at the viewer.

For much of her career, Chromati, 26, depicted the naked bodies in her powerful portraits of black women behind protective disguises. Whether they were braiding each other’s hair, defecating or walking along the checkerboard pathways that have become a hallmark of her visual universe, her subjects wore vibrantly colored almond-shaped masks with full lips, wide noses and blank holes for eyes. Such was the case with the figures in her debut show, “BBW” (an acronym for “big beautiful women”), at Platform Gallery in Baltimore in 2016. That exhibition, Chromati wrote at the time, celebrated black women “enjoying life with and without interruptions … just living,” in crisp digital prints collaged with bits of bandanna and Kanekalon synthetic hair. In 2018, a trippy animation of her work appeared on HBO’s groundbreaking late-night show “Random Acts of Flyness.” The short followed the neurotic inner monologue of Princess, a blue-faced character whose appearance changes with each grill she puts in her mouth, as she goes on a quest to calm her jittery heart, bringing her talking, no-nonsense vagina along as a sidekick. 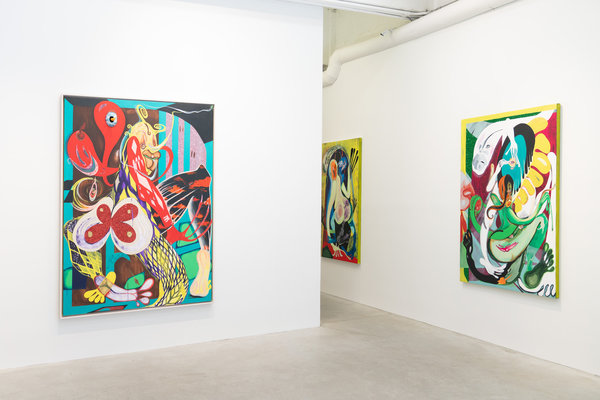 In her new work, however, the Guyanese-American artist has removed the masks from her figures’ faces and shifted the focus from her community to her own inner world, creating whirlpools of swirling bodies and floating parts — eyes, breasts, legs, fingernails — that together form a reflection of the artist herself. “Once you stop hiding, you find more ease in how you move and how you’ve given yourself permission to understand yourself, to love yourself and to demand love and understanding from others,” Chromati says. “At that point, there’s no reason to have the mask.”

Her latest paintings, which can stand as tall as 96 inches, take a looser approach than her earlier graphic-design-inspired work, with female figures rendered in energetic curls of acrylic paint, glitter, gouache and vinyl, sometimes embellished with intestine-like coils of fabric soft sculpture. A single image may include a handful of intertwined faces and fragments, smiling or grimacing — or what the artist calls representations of her “energy and inner thought.” These painted figures might be “opening her eyes to what’s ahead,” Chromati says, “or they’re clinging to her, representing the past that is still in her present.” This evolution caught the attention of the artist and curator Nina Chanel Abney, who selected Chromati’s acrylic, vinyl, nail and glitter work “She’s Got the Juice” (2019) for a survey of new figurative painting on view at Jeffrey Deitch gallery in Los Angeles through Aug. 17. 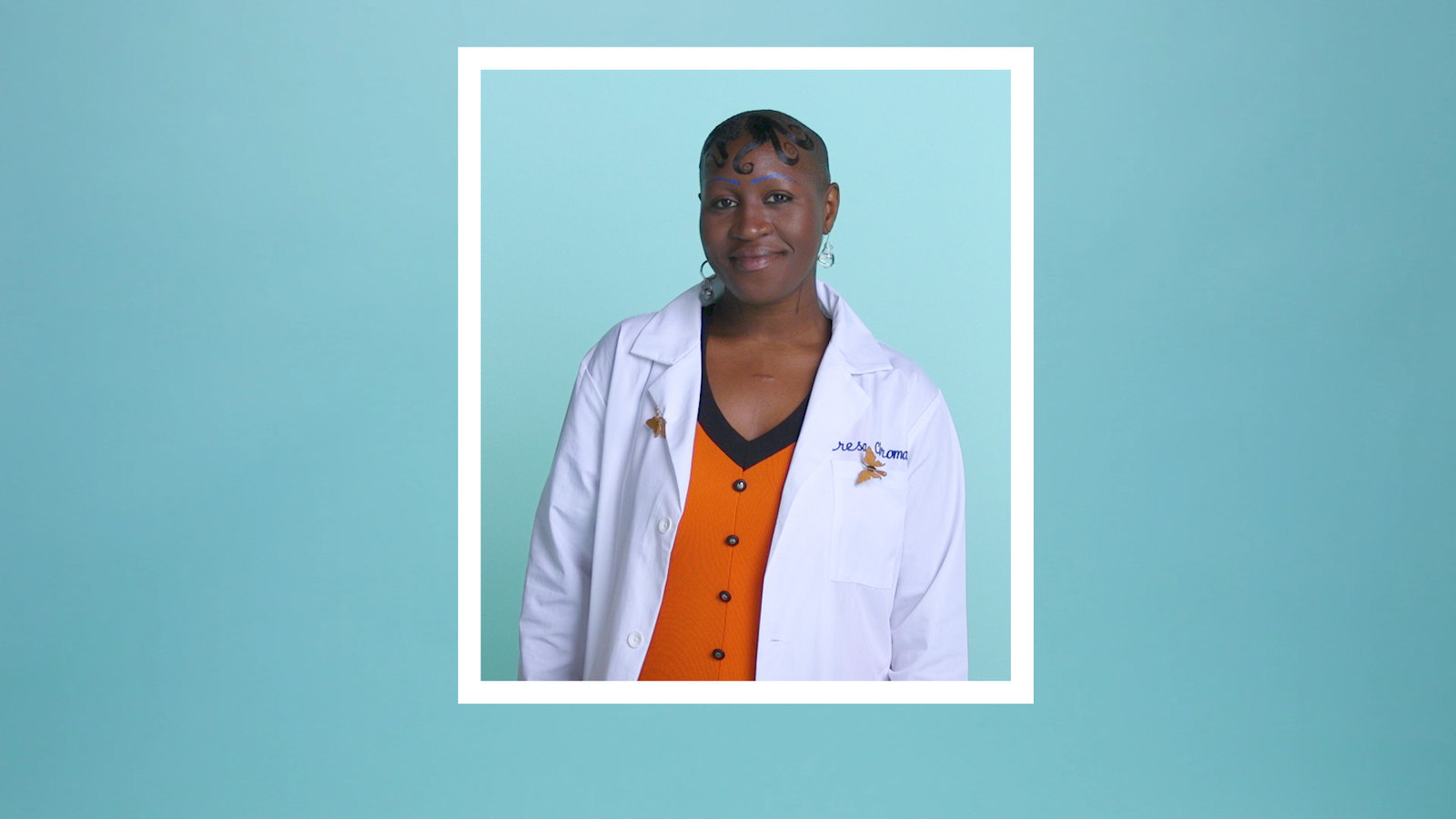 Chromati, who earned her B.F.A. in graphic design at the Pratt Institute in 2014 and now works in Brooklyn, was raised in West Baltimore. She spent her formative years living in a house with her mother, her guitar-playing grandfather and her grandmother, who loved to freestyle positive raps while driving around in a Toyota adorned with hand-painted birds. Chromati credits growing up in this “pro-black, natural kind of family” with fostering a secure self-identity from an early age; her family’s presence can be felt in works like “Prepared (She’s With Me)” (2019), in which an overlaid “center being” represents the source of intuition. “I see it as this inner voice,” Chromati says. “I often wonder if these are ancestors speaking to me or through me.”

Her work has always been about black women, and by offering a multifaceted representation of one woman in particular — herself — Chromati presents a contrast to one-dimensional stereotypes. But she is quick to dismiss those seeking “clickbait” about “trauma, identity, the gaze” in her work, she says; her art is simply the result of being honest about who she is. “In the art world, the whole idea of blackness in opposition to whiteness, it’s just kind of late,” Chromati says. “I think it takes more effort and more self-awareness from me to be like, ‘I’m only making work about my feelings and emotions, versus making work about my identity, necessarily, or trauma or struggle.’”

As Chromati has turned inward with her work, she’s been cautious to leave it abstract enough to inspire universal interpretations. “I want to pack a lot into the work, so you can always see something new in it. You can take whatever you want at whatever time,” she says. In doing so, she’s come to see how much self-representation has been present in her artwork all along. “Throughout my working practice,” Chromati says, “I started to realize that these faces are fragments of myself.” 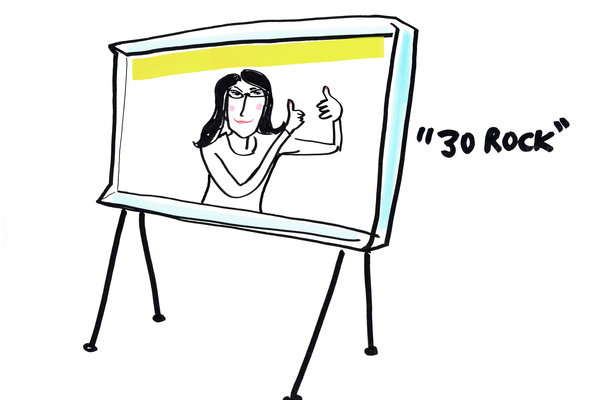 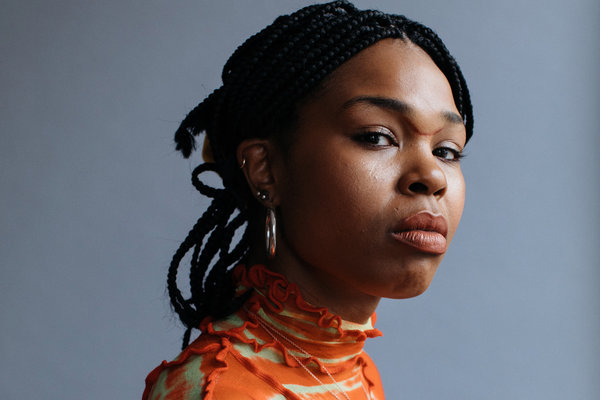