Instead of going after each other in their debate, Sanders and Warren joined forces against a barrage of attacks from lesser-known moderates. 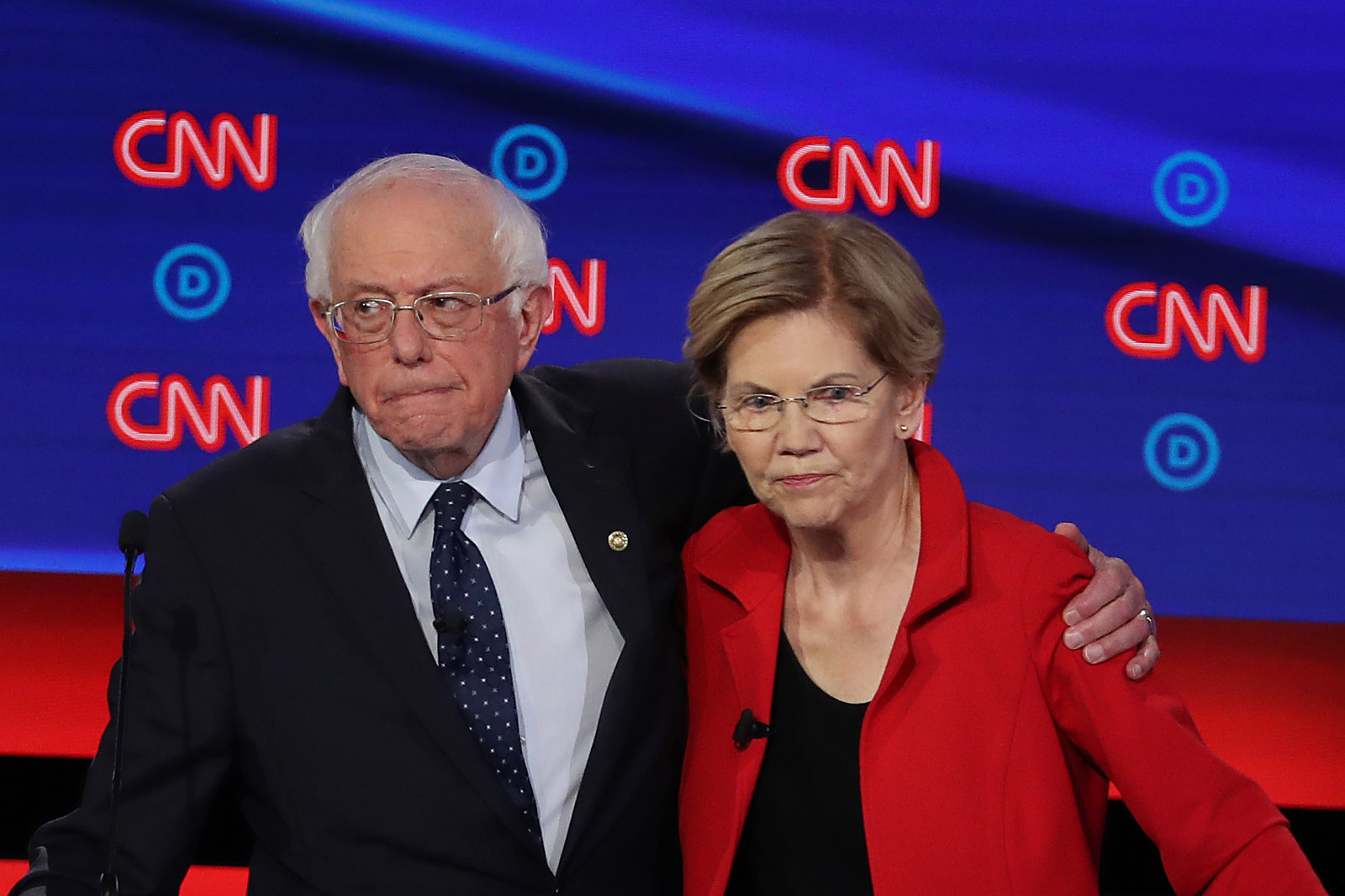 DETROIT — A few minutes after Tuesday’s presidential debate, as reporters waited for interviews in a tent down the street from Detroit’s Fox Theatre, Faiz Shakir put on a breathless mock tone and held up his hand like a microphone.

“Why didn’t they attack each other!?”

“Why didn’t they go on the attack so we can actually do the stories we wanna write!!!???”

Weaver, laughing along with this game, replied into Shakir’s mimed tape recorder that Sanders and Warren, two icons of progressive politics, didn’t “follow through” on the primetime, debate-stage rivalry that, in their faux telling, political reporters were salivating to see on Tuesday evening.

Few really expected Warren and Sanders, the highest-polling candidates on stage in the first of two Democratic debates this week, to go after each other here in Detroit. The two senators, both dominant and at ease on stage, instead worked in lockstep at points to bat back moderate critics, even as moderators attempted to incite a conflict between the two big-name progressives.

Sanders and Warren, who spoke nearly twice as much as most of the eight other candidates to their left and right, fielded question after question in a debate designed by the host network, CNN, to provoke an ideological clash between liberals like Sanders and Warren and lesser-known moderates like John Delaney, a former member of Congress from Maryland. (Four hours ahead of Tuesday’s debate — the first so far to feature Warren and Sanders on stage together — CNN teased the coming fight: “LIBERAL AND MODERATE DEMOCRATS CLASH IN DETROIT.”)

Jake Tapper, one of three CNN hosts leading the event, set the tone for the night with his first question, directed to Sanders.

“You support Medicare for All, which would eventually take private health insurance away from more than 150 million Americans, in exchange for government-sponsored health care for everyone,” Tapper said. “Congressman Delaney just referred to it as bad policy and previously he’s called the idea ‘political suicide that will just get President Trump reelected.’ What do you say to Congressman Delaney?”

Sanders shot back with a gruff reply: “You’re wrong.”

As Delaney got his chance to respond, Warren could be heard off-camera, eager to weigh in on Sanders’s side of the argument.

“My name was also mentioned in this!” Delaney kept going. “No,” she said, trying again. “This is the party —” When finally given a chance to speak, Warren set up her first big applause line of the night.

“Let’s be clear about this,” she said. “We are the Democrats. We are not about trying to take away health care from anyone. That’s what the Republicans are trying to do. And we should stop using Republican talking points in order to talk with each other about how to best provide that health care.”

The health care scuffle was just the beginning for CNN, which over nearly three hours continued to engineer conflict. The approach at times elevated Delaney, Rep. Tim Ryan of Ohio, and former Colorado governor John Hickenlooper, whom the moderators called on in what had the feel of a Choose Your Fighter menu on a video game.

Moments after Delaney’s opening punches, CNN’s Dana Bash picked Ryan to open a fight with Sanders on immigration: “Are Sen. Sanders’ proposals going to incentivize undocumented immigrants to come into the country illegally?” she asked.

Yes, Ryan replied, before offering a carefully crafted sound bite. “If you want to come into the country, you should at least ring the doorbell.”

Later in the debate, Bash, noting Ryan’s base in a big auto industry state, asked “how concerned” he is about Sanders’ bill to end the sale of gas-powered cars.

Ryan said afterward that he was happy for the opportunity CNN’s format offered him.

“You noticed?” Ryan replied with a grin when asked in the post-debate spin room if the conflicts CNN provoked with Sanders and Warren were helpful to him. “Yeah, I think a little bit. We were really able to draw some distinctions.”

Hickenlooper was a popular moderator choice, too. “I’d like to hear what you say about Sen. Warren’s suggestion that those on stage not in favor of Medicare for All lack the political will to fight for it,” Tapper implored. At another point, Tapper gave Hickenlooper a chance to push his anti-socialism argument — perhaps the single defining issue of his longshot candidacy — against Sanders.

One attempt to pit Warren against Sanders prompted another Delaney interlude — and set up another big Warren line.

After Warren quickly brushed off a question about whether her proclamations that she is a capitalist are intended as a contrast to Sanders, a democratic socialist, Tapper offered Delaney a chance to re-enter the fray. He touted public-private partnerships and decried “fairy tale economics.”

“You know,” Warren responded, “I don’t understand why anybody goes to all the trouble of running for president of the United States just to talk about what we really can’t do and shouldn’t fight for. I don’t get it.”

A spokesperson for CNN did not immediately return a request for comment on the recurring pattern during the debate of moderators asking moderates to critique progressives.

Weaver, the senior Sanders adviser, cast the debate as a fight over the future of the party: “about whether it’s going to be a progressive party that speaks to the needs of people and marginalized communities,” he said, or one “beholden to special corporate interests.”

“And I think the corporate interests tonight took a thorough lashing,” Weaver added. “Bernie Sanders certainly spoke to the principles he’s stood for for decades. And Elizabeth Warren spoke to her principles.”

Warren’s top allies spoke in similar terms about the two senators. The Progressive Change Campaign Committee, a national group that supports the Massachusetts senator and coordinates with her campaign, immediately declared the debate a “one-two punch” win for both Warren and Sanders.

Seven months into the race for the Democratic nomination, neither Sanders nor Warren has expressed an interest in attacking the other. The day before the debate, at a town hall in Toledo, Ohio, reporters repeatedly questioned Warren about facing off against Sanders.

“This isn’t about Democrats firing at other Democrats. Bernie and I have been friends forever,” she said again.

They often refer to one another, as Warren did in Toledo, as “my friend” or “my good friend,” though they mean this in the working-relationship, Washington, DC sense. (They don’t hang out. Warren, save for her friendship with Al Franken before he resigned his Senate seat last year following multiple allegations of sexual misconduct, is not particularly close with her colleagues.)

They have been partners on economic issues for decades now, before either were national political figures. (In 2008, Sanders asked Warren, still a Harvard Law professor at the time, to appear as his guest at a town hall in Vermont. He delivered his speech, the same one he’s always given, and Warren walked the crowd through a detailed PowerPoint presentation on the economic trends that now feature at her town halls on the trail.)

They agree on a lot. At the first Democratic debate last month in Miami, Warren gave a forceful defense of a Sanders trademark issue, a Medicare for All health care plan, saying without apology, “I’m with Bernie.”

As senators, as candidates, and as national figures in Democratic and independent politics, Elizabeth Warren and Bernie Sanders have always differed vastly on their visions for achieving progressive power.

If he is leading a political revolution in his unapologetic brusque trademark, she is waging a more tactical and methodical kind of fight: a robust campaign for specific government regulation, oversight, and, as she says often on the campaign trail, “big structural change.” (As aides to Sanders and Warren have both described it in so many words, it’s “the preacher vs. the teacher.”)

Polls show that the two progressives appeal to two distinct blocs of Democratic voters: Sanders to a group that skews male, is part young people, part working-class, part less educated; and Warren to more voters who are women, seniors, and well-educated. While Sanders is fighting former vice president Joe Biden for disaffected voters in the Midwest, making an explicit argument about the best way to defeat President Trump in states like Wisconsin, Michigan, and Pennsylvania in the general election, Warren is building a coalition of perhaps more traditionally liberal Democrats.

Even on the same side of Tuesday’s debate clashes, their differences in appeal and approach were on display.

When Hickenlooper attacked Sanders for being overly “radical,” he threw up his hands in frustration. Later, in a Medicare for All exchange, he fired back at Ryan — “I wrote the damn bill!” — with a line his campaign quickly printed on bumper stickers for sale.

Minutes later, Delaney, who has a net-worth of more than $60 million, gave his critique of Warren’s proposed wealth tax, which would draw from millionaires like the Maryland congressman. On stage to his right, Warren just stood at her podium, rubbing her hands together with a crafty smile.

More on the debate