She’s back. Demi Lovato announced her return to acting in a mysterious role for the new season of Will & Grace.

The “Sorry Not Sorry” singer, 27, took to her Instagram on Tuesday, August 27, to reveal that she will star on season 11 of the Emmy-winning sitcom. NBC confirmed to Us Weekly that the former Disney Channel star will play Jenny, a guarded woman who comes into the life of Will (Eric McCormack) in an unexpected way. Lovato will appear in three episodes sometime in 2020, when the next season airs.

“Will & Grace & Demi 💁🏻‍♀️📺 @nbcwillandgrace #WillandGrace,” Lovato captioned a photo of her on the set of the NBC comedy. Debra Messing, who plays Grace, commented on the photo, writing, “DEMIIIIIIIIIIIIIIIIII!!!!!!!! You are so sweet. I am so happy you came to play with us! You are now officially part of the family.”

After Lovato’s news, Sean Hayes, who plays Jack on the show, posted a photo of them on set on his Instagram Story. “This lovely lady right there – Demi Lovato!! She’s here to have some laughs with us on W&G,” he wrote, adding, “This is SO MUCH FUN.”

McCormack also shared a photo with Lovato on Twitter.

Will & Grace first ran for eight seasons from 1999 to 2006. The show was rebooted in 2018. Lovato’s appearance will be on the third season of the reboot, which will also be its last. 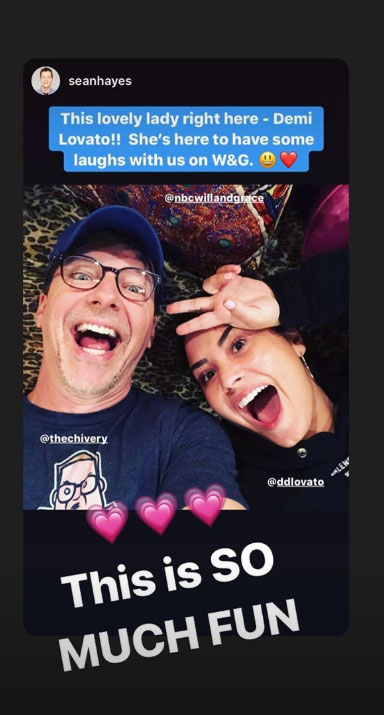 A day before her announcement, the “Cool for the Summer” songstress teased that she had something exciting in the works on her Instagram Story, which is why she couldn’t attend the 2019 MTV Video Music Awards on Monday, August 26.

“I skipped the VMA’s for a REASON,” she wrote on a blank black background. “Well that and I just hate award shows.”

Fans speculated that Lovato’s Instagram Story was shade toward Taylor Swift, who took home three awards at the MTV VMAs and whom the Camp Rock star has had a tense relationship with. In a 2016 interview with Glamour, Lovato criticized Swift’s feminism and accused her of “tearing down” Katy Perry in her song “Bad Blood.” “That’s not women’s empowerment,” Lovato said at the time.

After claims that she shaded Swift, 29, Lovato took to her Instagram Story again to deny that her “reason” for not attending the MTV VMAs had anything to do with the “ME!” singer.

“Btw.. I didn’t ‘shade’ anyone last night. My REASON for not going is because I’m literally living my dream being on Will & Grace rn so stop reaching thaaaaannnnkkssss,” she wrote.

Will & Grace will be Lovato’s first on-screen role since her work in Netflix’s From Dusk till Dawn: The Series in 2016. The Texas native voiced a character in the animated film Charming in 2018. Lovato is also set to star opposite Will Ferrell in Netflix’s upcoming comedy, Eurovision, which is inspired by the popular European singing contest of the same name.

In addition to returning to acting, Lovato — who was hospitalized and spent three months in rehab in 2018 after an almost-fatal drug overdose — is also working on new music.

“You know what’s great about making an album? You get to say anything you want, be as open and honest as possible and tell your side of the story regardless of who might not like it…” she wrote on an Instagram Story on June 25, teasing her upcoming seventh album.