Eddy de Pretto is now 27, and these days he sings on some of the largest stages in France — or he did, when the stages were open. When he was 21, he performed for a smaller audience: the tourists on the bateaux-mouches, the Paris sightseeing cruises that ply millions of people up and down the Seine.

“It was a pretty crazy job. I was on the singing cruises, the ones where they serve you dinner,” de Pretto said in a recent video interview from Paris. From the little stage in the boat’s dining room, he recalled, he’d serenade tourists with syrupy Charles Trenet standards, to total indifference. “They were eating, looking out at the Eiffel Tower. They didn’t even realize someone was singing — they thought it was a soundtrack.”

“But those three years on the bateaux-mouches were so completely typical of what it’s like to make a career,” he added. “It was totally formative to sing every night in front of people who didn’t give a damn at all.”

Those lonely nights on the cruise ship are the origin of “À Tous Les Bâtards” (“To All the Bastards”), de Pretto’s second album, released in France last month. “I was waiting patiently to take the throne / And they’d sing my songs like I sang ‘La Vie en Rose,’” he belts on the first single, “Bateaux-Mouches,” whose started-from-the-bottom lyrics recall many a hip-hop boast. But name-checking both Rihanna and Édith Piaf as your lodestars? That’s rarer.

De Pretto burst to fame in 2018 with his triple-platinum album “Cure,” and its blend of urban beats and chanson poetics was not its only uncommon attribute. There was his voice: big and vibrant, with every syllable articulated for the back of the house. There was his look: hoodies and tracksuits, a three-day beard, and a strawberry-blond tonsure like a medieval monk’s. And there was his biography: a young gay man, uninhibited and unperturbed, from the suburbs that Parisians still typecast as a cultural backwater. 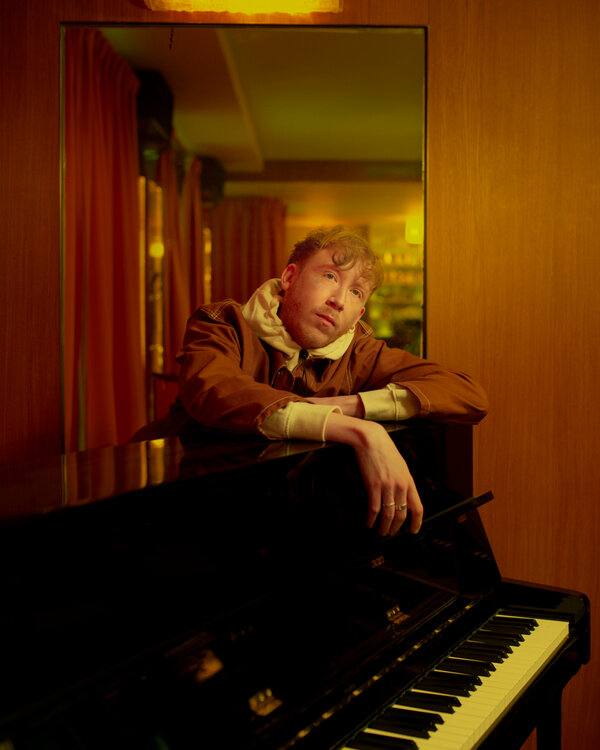 He was born in 1993 in Créteil, to the capital’s southeast. His father was a driver, and his mother a medical technician who revered an earlier generation of French singer-songwriters. “We lived in public housing, and my mother listened to a lot of Barbara, Brassens, Brel, Charles Aznavour,” he said. “She listened to it all the time, and really loud, too. Loud enough to hear it over the vacuum cleaner.”

De Pretto said he played sports as a child, badly enough that his mother enrolled him in acting classes. The stage suited him. He landed a few small TV and movie roles. But his theatrical tendencies were not in harmony with the macho culture of the Paris suburbs.

That tension inspired his breakout single, “Kid,” a mid-tempo ballad about parents and their effeminate sons. “You’ll be manly, my kid,” de Pretto sings over spare piano chords and digital hi-hats, though the song’s video shows him struggling to heed the call. Shirtless and sweat-soaked in the gym, de Pretto looks far too rangy to lift the massive barbells, trapped between family expectations and his true nature.

“Every single word of ‘Kid’ is so wonderful,” said the singer Jane Birkin, who performed a duet with de Pretto in 2018. “He faced up to quite a lot of teasing, getting through in quite a tough neighborhood, with tough friends. And I should think he made himself respected — I wouldn’t mess around with him. And, at the same, time he has great fragility and great poignancy.”

“Kid” was an instant hit in France, and seemed to come out of nowhere. De Pretto’s weighty voice sounded like a ’60s throwback, but he sang over spare, menacing, bass-heavy beats. The slangy lyrics had the vibrancy of the suburbs, but they were as poetic as they were acidic, with that French fixation on what de Pretto calls “the weight of the word.”

For his first big TV appearance, in 2017, he performed with nothing but his own iPhone for accompaniment. The album cover of “Cure” had the same Gen-Z nonchalance: mirror selfie, phone in hand, leg hoisted on the kitchen table. A critic for the French newspaper Libération said astringently — but not without cause — that it looked like a late-night drunk pic sent to a Grindr hookup.

Indeed, there was also de Pretto’s subject matter: furtive glances in the locker room, sloppy after-parties in darkened basements, grim evenings trawling the apps. On his spiky single “Fête de Trop” (“One Party Too Many”), he details the malaise of yet another evening getting high and “slipping my tongue into the salivating mouths” of “tonight’s boys.” “Jungle de la Chope” (“The Hookup Jungle”) delves into the “insipid conquests” of casual sex, safe or otherwise.

Some gay musicians treat their homosexuality as a nonissue; others want to make it a mark of distinction. What made de Pretto’s debut so thrilling was that he did neither. He assumed his identity to the hilt, and thereby made it nothing special. “I’m writing from my point of view as a gay man,” he said. “But the songs are not a defense of being gay. I mean, yes, I’m gay, and I’m casting an eye on society.”

He has, however, recorded one sideways pride anthem. “Grave” (“A Big Deal”) is a funny, filthy encouragement to anxious gay youth — think Christina Aguilera’s “Beautiful” for teens whose first view of same-sex intimacy comes through streaming video. It’s a catalog aria of gay rites of passage that, de Pretto sings, are “not a big deal”: scoping out classmates in gym class, fantasizing about your best friend, and many more not printable in a family newspaper. “Not living it: That’s a big deal!” goes the refrain.

“If I had to compare him to anyone, it would be Christine and the Queens, although Eddy hasn’t exploded internationally,” said Romain Burrel, the editor of the French gay magazine Têtu. “Christine really opened the way for questions of gender and sexual orientation,” he said. “But Eddy is very, very French. There’s been a globalization of music, but when you listen to Eddy de Pretto, you’re in the 11th Arrondissement.”

Then again, this “Caroline” — whom the singer wants to get out of “my veins” — may not be an actual girl. She may be a personification of cocaine: a double meaning he underlines in the music video, which features de Pretto in a white parka singing amid flurries of snow.

“I love playing with these double meanings,” de Pretto said, “because it opens up the field of possibilities.” He certainly leaves the field open at the end of “À Tous Les Bâtards,” in the ingeniously smutty ballad “La Zone.” Here suburbs and sexuality become interchangeable, as de Pretto entreats us in a smooth falsetto to risk visiting … well, a certain area often considered dirty, or dangerous.

“La zone,” in French slang, denotes a rough suburban neighborhood, the sort of place you might go to score drugs. But as de Pretto croons of the “dark pleasures” of a place where “some men are afraid to go,” we realize the particular zone he’s inviting you to is more anatomical than geographical. (Birkin said this song reminded her of “Sonnet du Trou de Cul,” a poem by Verlaine and Rimbaud written in 1871. “It’s a wonder people don’t talk about it more!” she added.)

The Paris suburbs have birthed so many of France’s best singers and actors and artists, not to mention the reigning world champions of soccer. And yet western Europe’s largest and most diverse city still treats the towns outside its ring road as inaccessible places. “That was the whole project of the first and, I hope, this second album: breaking these fantasies and these ideas everyone has of what happens in the suburbs,” de Pretto said. “And of a pretty stereotypical view of being gay.”

“That’s the job of an artist,” he said, “to find points of view that haven’t been found yet.”