The team behind the Oscar-nominated animated short film “Hair Love” hit the 2020 Oscars red carpet on Sunday with a special guest: DeAndre Arnold.

Arnold, a Black high school senior from Mont Belvieu, Texas, made headlines last month after he and his family publicly revealed that he wouldn’t be allowed to walk at his upcoming graduation unless he cut his locs.

The Barbers Hill High School student has told multiple news outlets that he is fighting the school district’s guidelines on hair length. Arnold, who has been growing his hair in locs since the seventh grade, has said that his hairstyle —rooted in Black pride, culture and sometimes religion — is a nod to his Trinidadian heritage. 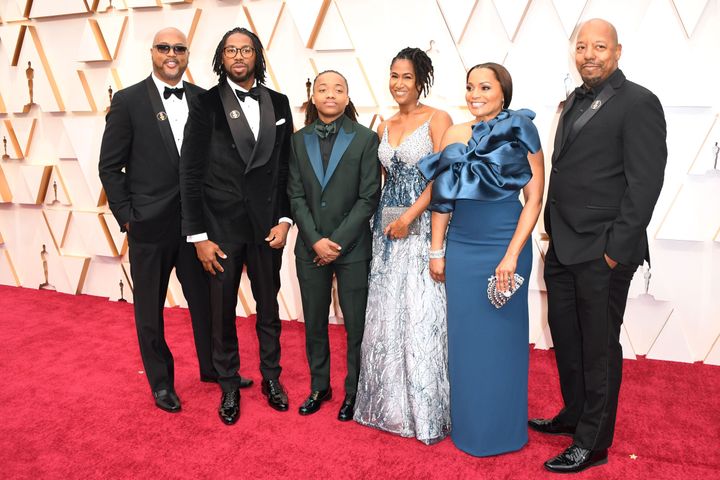 “Hair Love,” written and directed by Matthew A. Cherry, tells the story of a Black father who wears his own hair in locs and learns to do his daughter’s hair. The film earned an Oscar nod for Best Animated Short Film this year.

“Our hair is an extension of ourselves,” Cherry previously told HuffPost speaking about the short film. “And the cool thing about this story is that it really represents pure love: what we’re willing to do for the people we love even when they ask us to do something we don’t know how to do.”

After learning about Arnold’s story, Cherry joined Gabrielle Union and Dwyane Wade, producers of the film, to surprise Arnold last month with a video inviting him to attend the Academy Awards.

Cherry noted on Twitter at the time that Union and Wade would be flying Arnold and his mother, Sandy, out to Los Angeles for the award ceremony and would take care of their lodging and car service costs.

The filmmaker also shared that personal care brand Dove, a sponsor of “Hair Love,” would cover the family’s costs for tickets and wardrobes for the event.

On Saturday, Cherry shared a video on Twitter of Arnold getting ready for the Oscars, writing, “Locs looking great.”

Arnold had previously worn his hair pinned up at school to remain in compliance with the Barbers Hill Independent School District rules, but he and his family said that the district recently revised its guidelines to include more restrictions on hair length.

“Every day I would go to school, I would always be in dress code,” Arnold said on “The Ellen DeGeneres Show” last month. “But the thing with them is, if it was let down, I would be out of dress code … and this issue really escalated after Christmas break.”

Arnold told DeGeneres that he had been placed in in-school suspension over his locs and that his only two options were to either remain in suspension or go to an alternative school.

The high school senior added that he would not be allowed to walk at his upcoming graduation due to his hair.

“I’ve worked for this all my life, I’ve strived for this,” he said. “I deserve this moment to walk across [the] stage and enter into life. My parents deserve this.”