As the New York theater world points toward reopening, one major force within its nonprofit sector — and a central figure in its often lucrative collaborations with Broadway — is preparing to walk away.

James C. Nicola, the artistic director of New York Theater Workshop, announced on Friday that he will step down in June 2022. At that point, he will have spent 34 years — nearly half his life — at the off-Broadway theater, which spawned the once-in-a-lifetime hit musical “Rent” and grew under his leadership into a steady home for provocative fare by the likes of Caryl Churchill, the Five Lesbian Brothers and the director Ivo van Hove.

“I’ve been around long enough to see some of my colleagues carried out of their jobs in a pine box,” Nicola, 71, said on Thursday. “I didn’t want to go that route.”

His announcement comes at a time when theaters in New York are grappling with numerous internal and external pressures. Besides the protracted closures related to Covid 19, which has wreaked havoc on theaters’ finances, several groups of theater artists who are Black, Indigenous or people of color have pointed out the overwhelmingly white and male demographics of their artistic leadership, most notably in the “We See You, White American Theater” manifesto that came out in July 2020.

One of its demands was that theater leaders should view it as “an act of service to resign” if they have served in the role for more than 20 years — a benchmark that Nicola reached when George W. Bush was president. Nicola is the first prominent New York artistic director to announce his departure since then, and the process of replacing him will undoubtedly be closely watched.

Asked about his replacement, Nicola said he would “love to see someone who has the trust and faith of all the constituencies of the community.”

Unlike many artistic directors, Nicola was not primarily a stage director himself. He came to New York Theater Workshop in 1988 after stints in the New York Shakespeare Festival’s casting office and at Arena Stage in Washington.

In recent years, the workshop has seen several works transfer to Broadway from its airy East Fourth Street theater, including the Tony Award-winning musicals “Once” and “Hadestown”; the acclaimed personal-meets-political memoir “What the Constitution Means to Me”; and “Slave Play,” which is currently nominated for 12 Tonys. (Another transfer, “Sing Street,” was two weeks away from its first preview on Broadway when the Covid-19 lockdown happened.)

Nicola — who recently celebrated the 25th anniversary of “Rent,” the theater’s first Broadway transfer, with a starry online fund-raiser — says he is of two minds about the pipeline between commercial and nonprofit theater.

“If it’s a large project and it doesn’t have commercial enhancement, it’s probably not going to happen,” he said. “And I think that’s something we as an industry need to be really concerned about.”

Until that is feasible, the theater has established an ambitious Artistic Instigators program, connecting traditional theater artists, filmmakers and digital artists on projects that subscribers can watch in their evolving states. As Nicola envisions a post-coronavirus theater landscape, he hopes theaters will learn from these innovations.

“This year, we had 18,000 people view the ‘Rent 25’ gala from all over the globe,” he said. “Eighteen thousand. That kind of access — it’s hard to imagine not having the capacity to do that going forward. So maybe instead of doing eight shows a week, we do seven live shows and then stream a capture.” 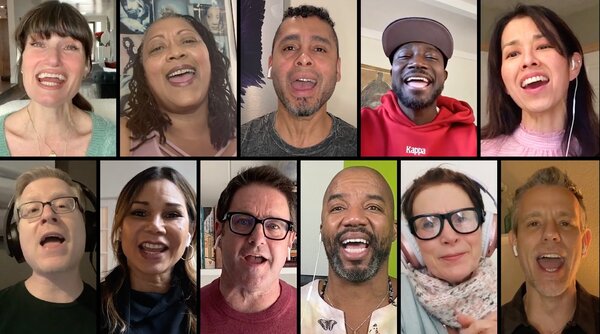 But those decisions will ultimately fall to his successor. Whoever it is, Nicola will be watching from the sidelines.

“I want to absolutely stay out of it,” he said. “I think it’s completely inappropriate to be hovering or hanging out, both during the process and when that person comes in. They shouldn’t have to contend with the old guy.”

He said he was at peace with what comes next.

“As a child, my dad told me he thought he was going to die at 37,” Nicola said. “He didn’t, but I started thinking the same thing: Was I going to make it past 37? And oddly, I was 37 when I started at New York Theater Workshop. In a certain way, it was like the beginning of my life, not the end.”