Howard Johnson, who set a new standard by expanding the tuba’s known capacities in jazz, and who moonlighted as a multi-instrumentalist and arranger for some of the most popular acts in rock and pop, died on Monday at his home in Harlem. He was 79.

His death was announced by his publicist, Jim Eigo. He did not specify a cause but said that Mr. Johnson had been ill for a long time.

Fluent and graceful across an enormous range on one of the most cumbersome members of the brass family, Mr. Johnson found his way into almost every kind of scenario, outside of classical music, where you might possibly expect to find the tuba — and plenty where you wouldn’t.

His career spanned hundreds of albums and thousands of gigs. He played on many of the major jazz recordings of the 1960s and ’70s, by musicians like Charles Mingus, McCoy Tyner, Carla Bley and Charlie Haden; contributed arrangements and horn parts for rock stars like John Lennon and Taj Mahal; and served as an original member of the “Saturday Night Live” band.

“I could find myself in almost anybody’s record collection,” he said in an interview in 2015 for the online documentary series “Liner Note Legends.”

And for more than 50 years, Mr. Johnson led ensembles with tubas on the front lines: first Substructure, then Gravity, which became his signature solo achievement. Consisting of a half-dozen tubas and a rhythm section, Gravity aimed, he said, to elevate the public’s estimation of the instrument.

From the 1930s, when traditional New Orleans music fell out of favor in jazz, the tuba had been relegated to the sidelines; the upright bass had almost entirely replaced it. Mr. Johnson helped to find it a new role, by expanding its range upward and by playing so lyrically. In recent years critics have hailed a broader renaissance for the tuba in jazz, building on the foundation Mr. Johnson laid.

Writing in The New York Times in 2006, the critic Nate Chinen called Mr. Johnson “the figure most responsible for the tuba’s current stature as a full-fledged jazz voice.”

Howard Lewis Johnson was born on Aug. 7, 1941, in Montgomery, Ala., and raised in Massillon, Ohio, outside Canton. His father, Hammie Johnson Jr., worked in a steel mill, and his mother, Peggy (Lewis) Johnson, was a hairdresser. They weren’t musicians, but they kept the radio on at all times, usually tuned to gospel, R&B, jazz or country.

It was on boyhood visits to his uncle’s house that Howard first became enchanted with live music. “He lived over a juke joint, and if I spent the night and slept on the floor, I could hear the bass line very well,” he remembered in a 2017 interview for Roll magazine. “And that was very satisfactory.”

A gifted student, he learned to read before he was 4 and skipped a grade in school. His first instrument was the baritone saxophone; after receiving just two lessons from his junior high school band teacher, he taught himself the rest. A year later, he learned the tuba entirely by watching other players’ fingerings in band rehearsals. He would wait until everyone had left the practice room, then tiptoe over to the tuba and try out what he’d seen.

In the high school band, he thrived on a sense of friendly competition with his fellow tuba players. Many of them were receiving private lessons, but left to his own devices Mr. Johnson blew beyond what they were being taught, stretching the instrument far past its normal range and maintaining a graceful articulation throughout.

“I thought I was playing catch-​​up — that all the stuff that I taught myself to do, the others could already do it,” he told Roll. “The ones who were the best in the section were kind of like role models, I wanted to play like them someday. But by the end of that school year, I could play much better than they could. And I could do a lot of other things.”

After high school, Mr. Johnson spent three years in the Navy, playing baritone sax in a military band. While stationed in Boston, he met the drummer Tony Williams, a teenage phenom who would soon be hired by Miles Davis, and fell in with other young jazz musicians there. After being discharged, Mr. Johnson moved breifly to Chicago, thinking it would be a good place to hone his chops before an eventual move to New York. At a John Coltrane concert one night, he met the prominent multi-instrumentalist Eric Dolphy, a member of Coltrane’s band. When he mentioned that his range was as great on the tuba as it was on the baritone, Dolphy urged him to move to New York right away.

“He said, ‘If you can do half of what you say you can do, you shouldn’t be waiting two years here, I think you’re needed in New York now,’” Mr. Johnson recalled. “So I thought, ‘It’s February, maybe I should go to New York in August.’ I thought about it some more, and I left six days later.”

Mr. Johnson also eventually learned to play the bass clarinet, euphonium, fluegelhorn and electric bass, as well as the pennywhistle, which he particularly loved, as a foil to the tuba in terms of both pitch and portability. Characteristically, he took this unlikely instrument seriously, not as a novelty, and developed a lightweight, even-toned, exuberant sound on it.

Upon arriving in New York, Mr. Johnson soon found work with the saxophonist Hank Crawford, the bassist Charles Mingus and numerous others. He began a two-decade affiliation with the composer and arranger Gil Evans, sometimes contributing arrangements to his orchestra.

In 1970, after being connected through a business associate, Mr. Johnson convinced the blues and rock singer Taj Mahal to allow him to write arrangements of Mr. Mahal’s songs that included a suite of tubas, and to take them on the road. Mr. Johnson and three other tuba players are heard on “The Real Thing,” Mr. Mahal’s 1971 live album. He would continue to work with Mr. Mahal off and on throughout his life.

He was soon getting work from other rock musicians. He led the horn section for the Band in the 1970s, including on the group’s farewell performance, captured in Martin Scorsese’s famed concert film “The Last Waltz.” He continued working with Levon Helm, the Band’s drummer and singer, for decades.

But Mr. Johnson’s greatest public exposure came on television. In 1975 he joined the house band for a new late-night comedy show then called “NBC’s Saturday Night.” He would remain in the ensemble for five years, helping to shape its rock-fusion sound and making an appearance in some of the show’s most fondly remembered musical sketches. 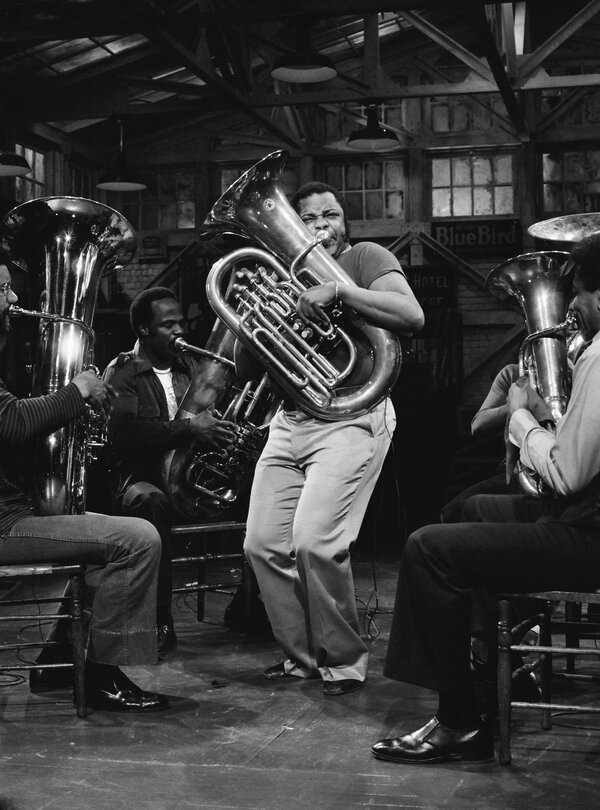 Mr. Johnson is survived by his daughter, the vocalist and songwriter Nedra Johnson; two sisters, Teri Nichols and Connie Armstrong; and his longtime partner, Nancy Olewine. His son, the musician and artist David Johnson, died in 2011.

With Gravity, which he led from the 1970s until the end of his life, Mr. Johnson poured the sum of his musical experiences into arrangements for six tubas and a rhythm section that alternated between acoustic and electric.Reviewing a Gravity performance in 1977 for The New York Times, Robert Palmer lauded the group’s “fresh sound” and said he was disarmed by its “sunny good humor and affection for the jazz‐and‐blues tradition.”

Mr. Palmer made particular note of Mr. Johnson’s versatility: “Whether he is improvising on tuba, which he plays in a roaring and whooping style with remarkable facility, or on the baritone saxophone, which he wields with fluent authority and a dark, smoking tone, he combines New Orleans phrasing, avant‐garde shrieks, blues riffing and multi‐noted bebop flurries in a consistently exciting and wildly original style.”

Mr. Johnson remained active until nearly the end of his life, despite a number of health setbacks. In 2017, he and Gravity released a quietly triumphant last album, “Testimony,” with a number of original members still in the band. His daughter also makes an appearance on the album.

“This is something I hear every time: ‘I didn’t know a tuba could do that!’” Mr. Johnson said in a 2019 interview with the Fillius Jazz Archive at Hamilton College. “Well, that means I haven’t been doing my job, because I’ve been doing it since 1962, and people still don’t know.”