BERLIN — After years of hand-wringing about its place in German history, strife over the provenance of its objects and delays in its construction, the Humboldt Forum, an attraction in central Berlin conceived as Germany’s equivalent to the Louvre or the British Museum, finally opened with a ceremony on Wednesday.

At least, in theory.

Although the event was billed as an official inauguration of the $825 million building, it remains closed to visitors because of the coronavirus pandemic. The “opening” was a digital one, a modest livestreamed tour of the exhibition spaces with short statements by curators and other leading figures from the project. The building is likely to remain closed until infection numbers are low enough for the city to reopen cultural institutions, hopefully early next year.

Monika Grütters, the German culture minister, said in a speech during the ceremony that the Humboldt Forum “deserved more than a digital opening. It deserved a party, with an audience and a festive program.”

It was an anticlimactic start for one of Europe’s most expensive and ambitious cultural undertakings.

Housed in a newly reconstructed Baroque palace, the Humboldt Forum will eventually showcase thousands of ethnological artifacts, including Mayan sculptures and wooden boats from the South Pacific, many of which were acquired during the colonial era. It will also include exhibits of Asian art and items from Berlin’s history. 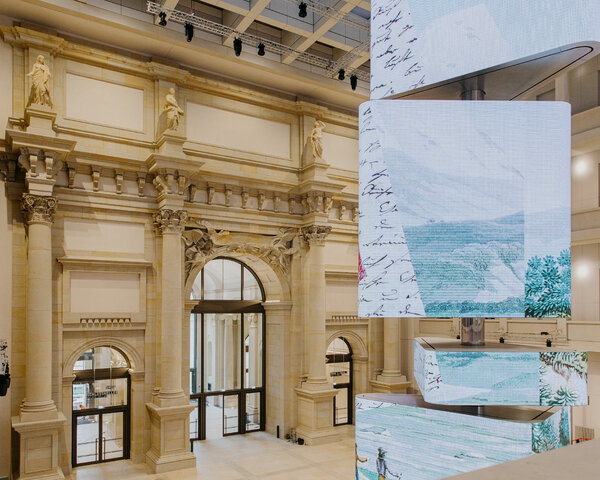 Initially scheduled to be finished in 2019, but delayed when construction overran, the museum is now meant to open in segments over the next two years. The first phase, finished this week, includes outdoor spaces and the lobby, as well as exhibitions about the history of the site.

Even as it was inaugurated, 18 years after its initial conception, its leaders were still struggling to overcome skepticism and drum up enthusiasm among the German public.

Critics have decried the reconstructed palace as a politically fraught eyesore, and activists have claimed that the museum’s leadership has not done enough to probe the provenance of some of its exhibits.

Many Berliners’ resistance to the project stems from the new building itself. The original Berliner Schloss, or Berlin Palace, was built by the royal Hohenzollern dynasty, starting in the 15th century. The palace was demolished in 1950 by the East German government, which erected its Parliament in its place. After German reunification, lawmakers voted to tear down that building and construct a facsimile of the original schloss — a decision many still see as an erasure of East Germany’s history.

Designed by the Italian architect Franco Stella, the new building incorporates modern elements — sleek interiors and one minimalist outer facade — into the Baroque design of the original palace. Initial reviews of the building in the past week have not been kind: An article in Die Zeit, a weekly newspaper, compared it to an “insurance office” and Der Spiegel, a newsmagazine, noted tartly that its interiors looked “easy to clean.”

The opening has also taken place against the backdrop of news reports that problems with the building’s construction were more serious than previously known, drawing comparisons to Berlin’s infamous airport, which opened this fall after countless technical setbacks, nine years behind schedule.

A November article in the Süddeutsche Zeitung newspaper reported that, among other flaws, the Humboldt Forum’s doors had been built too small to bring in cases for some exhibits and that malfunctioning air-conditioning had potentially put delicate artifacts in danger.

In a letter to the newspaper, the museum refuted both claims and argued that the article contained “gross untruths.”

Hartmut Dorgerloh, the Humboldt Forum’s director, said in an interview that any comparison to Berlin’s disastrous airport project was unfair, adding that negative news reports were partly down to “Berlin bashing,” a tendency by outlets from outside the city, such as the Munich-based Süddeutsche Zeitung, to denigrate the capital.

“There were problems, but they are controllable,” he said.

Hartmut Ebbing, a lawmaker who sits on the Humboldt Forum’s board of trustees, said in an interview before the opening on Wednesday that the “leadership of the Forum is very lucky” that the coronavirus had interfered with its plans to open the building to the public. Otherwise, he said, it wouldn’t have been ready.

Mr. Dorgerloh conceded that the building had some defects, but he said hiccups were to be expected. The building was ready to welcome visitors, he added, even if they were not allowed to enter.

He denied that artifacts had ever been in danger and said that the air-conditioning was working well, except for in one area, where it was being fixed.

During a tour of the building last week, Mr. Dorgerloh showed off the rooms that will be accessible once Berlin’s coronavirus measures are relaxed. They included one containing a large-scale film projection about the history of the site, and an archaeological exhibition amid the building’s foundations, featuring the large holes left by explosives during the original palace’s demolition.

Standing in a fourth-floor passageway that connects several galleries, Mr. Dorgerloh pointed to two objects that had been juxtaposed to reflect the museum’s willingness to interrogate itself.

One was a sculpture of King Friedrich I, the monarch who oversaw the earliest colonial ventures by Prussia, the kingdom that later became the bedrock of the united Germany. The other was a towering sculpture by the Switzerland-based artist Kang Sunkoo, of a black flag, flying at half-staff, “as a reminder of the crimes of colonialism,” Mr. Dorgerloh said.

The museum has worked to address criticism from anticolonial activists, announcing collaborations with some artifacts’ communities of origin and convening a team of international advisers.

That commitment already faces its first test. Last week, Nigeria’s ambassador to Germany, Yusuf Tuggar, officially requested the return of the so-called Benin Bronzes, spectacular sculptures meant to be shown in the Humboldt Forum that were looted by British troops from an area that is now Nigeria. Mr. Dorgerloh has said that the decision will be up to another organization, the Prussian Cultural Heritage Foundation, which oversees that part of the collection.

The projects’ supporters are convinced that the Humboldt Forum will win visitors over once they see it firsthand. Wolfgang Thierse, a former lawmaker with the center-left Social Democrats who was one of the Humboldt Forum’s early boosters, said in an interview that public debates, like the one about the museum’s relationship to colonialism, were a “natural part of a vibrant project.”

But he also said that resistance to the Humboldt Forum stemmed from the horrors of the Nazi regime, which had bred skepticism toward “patriotism, big statements and big projects.” Although Germany has a responsibility to look back on its terrible crimes, he said, “we also have the right to open ourselves up to world culture.”