Jackie Saccoccio, a painter known for explosive yet delicately structured, almost atmospheric abstract paintings that exploited paint’s fluidity in the tradition of Jackson Pollock, Paul Jenkins and Helen Frankenthaler, died on Dec. 4 in Manhattan. She was 56.

Her death, in a hospital, was announced first on Instagram by her husband, the sculptor Carl D’Alvia, and later by her gallery, Van Doren Waxter in Manhattan, which said the cause was cancer.

Ms. Saccoccio belonged to a generation of female artists now in their 40s and 50s who added a new vitality to abstract painting beginning around the turn of the 21st century, including Charline von Heyl, Julie Mehretu, Joanne Greenbaum, Michaela Eichwald, Amy Sillman, Katharina Grosse and Cecily Brown. Most of them saw new potential in the art of the past, and several, like Ms. Saccoccio, experimented with paint handling and randomness.

Inspired equally by the Abstract Expressionists and the Italian Baroque, Ms. Saccoccio specialized in large canvases on which expansive waves and splashes of bright, luminous color seemed to swirl and clash amid networks of dripped lines running in several directions. The combination fragmented space and seemed to hover before the viewer like an overactive, sumptuously colored cloud. 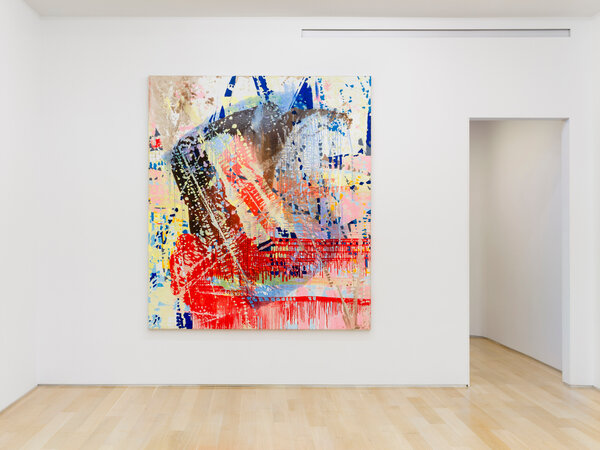 She incorporated chance into her work by pouring, dripping and splattering paint, increasing the action by tilting her canvases one way and then another. Her paint ran the gamut from thick to thin. She allowed it to drip from one canvas onto another and even transferred marks by pressing wet canvases together. She preferred large canvases and handled them by herself, never hiring assistants, although around 2004 she did switch from wood to aluminum stretchers, which weighed less.

Seemingly shy, Ms. Saccoccio was actually just self-contained, and — as her published interviews indicated — full of opinions and observations that she shared with anyone who asked. She disliked working small. “It’s very difficult for me to deal with just the hand-wrist-mind thing,” she said in a 2015 interview for Artspace.

Her paintings seemed extraordinarily spontaneous. “Ms. Saccoccio’s recent paintings look as if they were blasted onto the canvas,” the New York Times critic Martha Schwendener wrote in a 2014 review of her two-gallery show at Eleven Rivington and Van Doren Waxter.

The effect was purposeful; in an article in Elle magazine that year, Ms. Saccoccio said she wanted to “communicate this idea of impermanence” and “make a static object” — the painting — “seem like it’s moving.”

She studied Mannerist portraits and Baroque sculptures in Italy’s museums, and she would take detailed notes on the dynamics of a work’s paint surface or three-dimensional form. At the Capitoline Museum in Rome, for example, she was thrilled by Alessandro Algardi’s larger-than life bronze sculpture of Pope Innocent X, completed in 1650, in which the pope’s heavy undulating cape seems to have a life of its own.

Back in the studio, she would try to translate her notes into the language of abstraction, her improvisations usually taking her far afield from her starting points.

In fact her paintings needed to be looked at over time to get a full sense of their complex, ravishing beauty. Many of them could involve up to 50 layers and take as long as three months to complete.

Even so, as she said the Artspace interview, “Usually I think a painting is done when I feel a reconnection to the ideas I originally had.”

Other influences included Titian, Malcolm Morley and Courbet, as well as her contemporaries. “Profile (Yellow Yuskavage),” completed in 2015, was based on the palette of a work by the New York painter Lisa Yuskavage. “Tempest (Concave),” completed in 2019, takes its title from Shakespeare and has some of the whiplash energy of Bernini’s “The Ecstasy of Saint Teresa.”

Jacqueline Marie Saccoccio was born on Dec. 16, 1963, in Providence, R.I., the third and youngest child of Harry Saccoccio, a businessman, and Anna (DiSanto) Saccoccio, a homemaker. Both her parents were the children of Italian immigrants.

She was interested in art from an early age, and was mesmerized by watching her next-door neighbor paint seascapes in his backyard. A high school art teacher encouraged her to apply to the Rhode Island School of Design, conveniently located near her home, where she briefly studied architecture before switching to painting.

In 1983 she studied in Rome, on what would be the first of several Italian sojourns that became essential to her work. The others were made possible by grants from the Fulbright-Hays Foundation in 1990 and the John Simon Guggenheim Foundation in 2000, as well as the Rome Prize from the American Academy in Rome, which she received in 2004.

After earning her B.F.A., Ms. Saccoccio worked for a year for an antiquities dealer in Cambridge, Mass., and received an M.F.A. from the School of the Art Institute of Chicago. She moved to New York around 1990 with Mr. D’Alvia, whom she met at the Rhode Island School of Design; they married in 1992. He survives her, as do their daughter, Maddelena D’Alvia; her brother, William; and her sister, Janet Saccoccio. She lived in recent years in West Cornwall, Conn.

Her interests in the heat of Abstract Expressionism, the Baroque and Mannerism made her feel out of step with the coolness of the more conceptually oriented art that prevailed in the 1990s. At the time Ms. Saccoccio was painting landscapes defined by heavy black outlines that reflected her admiration of Roy Lichtenstein. But soon the lines disappeared, and her brushwork began to loosen up.

Some of those works were based on flowers, like the two exhibited in the Project Room of the Lauren Wittels Gallery in SoHo in 1997, her first New York solo show. Her best paintings tended toward excess: piles of looping brush strokes in bright colors. She also sought to expand her medium physically by hanging her paintings on walls where she had executed large abstract ink drawings, as in her 2006 show at Black & White Gallery in Williamsburg, Brooklyn.

In 2001 she started living part time with her husband and daughter in Connecticut, where she had enough studio space to work on more than one large canvas at a time. Over the next few years, the brush ceased to be her dominant tool. She unveiled her first pour painting, a 15-foot-wide effort called “One to One,” at Eleven Rivington on the Lower East Side in 2010.

As her brush strokes got larger and larger, she was pulled into the physical world of paint itself and became, as she told the artist Ridley Howard in a 2013 interview for The Huffington Post, “more interested in what was happening within the space of the mark than relating it to other marks.”

Ms. Saccoccio learned she had cancer in 2014; though her treatment was arduous, she rarely stopped working. From 2015 to 2019, she had eight solo shows in galleries in the United States, Japan and China. A two-gallery show that she titled “Femme Brut” opened at Van Doren Waxter and Chart in TriBeCa at the start of 2020. Another show of new work opened in October at her Tokyo gallery, the Club. Ms. Saccoccio titled it “Knife Edge.”