Welcome to Best of Late Night, a rundown of the previous night’s highlights that lets you sleep — and lets us get paid to watch comedy. We’re all stuck at home at the moment, so here are the 50 best movies on Netflix right now.

Late-night hosts weighed in Monday night on Super Bowl LV, noting how the big game was palpably different this year because of the coronavirus pandemic. Jimmy Kimmel referred to it as “the weirdest Super Bowl” ever.

“This was the first Super Bowl ever where I had to yell, ‘Be quiet — I’m trying to hear the poem!’” Kimmel said.

“One thing that was not normal, but was beautiful, was the pregame performance from the breakout star of Joe Biden’s inauguration, poet Amanda Gorman, who recited an original poem. It was the most exciting pregame poetry recital since Robert Frost kicked off the action at Super Bowl I.” — STEPHEN COLBERT

“Why aren’t we off today? The one thing I was hoping Donald Trump would accomplish is getting us Super Bowl Monday off. He had four years — nothing!” — JIMMY KIMMEL

“Seriously, the game was such a dud. I watched it from home and I still left early to beat traffic.” — JIMMY FALLON

“At a certain point, even Buccaneers fans were like, ‘Just end the game so we can get to Queen Latifah.’” — JIMMY FALLON

“And how about Tom Brady winning his seventh Super Bowl ring? At this rate, he’s gonna be the first player with a Super Bowl toe ring, people.” — TREVOR NOAH

“I don’t know if they mentioned this, but Tom Brady won his seventh ring at a time when there are a lot of people in this country who don’t even have one Super Bowl ring.” — JIMMY KIMMEL

“I mean, at this point Tom Brady has led the kind of life that 8-year-olds narrate to themselves in their backyard: ‘The crowd goes wild! Tommy wins his seventh Super Bowl! And now he’s rich and he’s married to a supermodel! And now he’s riding a dinosaur — rawr!’” — TREVOR NOAH

“Yeah, Brady has cemented his place on the sports Mount Rushmore, alongside Michael Jordan, Muhammad Ali and that fan who took a home run ball to the chest to save his beers.” — JIMMY FALLON

“What a weekend for the people of Tampa. Forty-eight hours of nonstop drinking and partying in the streets — and then the Super Bowl.” — JIMMY FALLON

“Tampa Bay fans were not taking precautions. Last night, they had a huge, mostly maskless celebration while I was eating nachos through my N95.” — JIMMY KIMMEL

“While the teams did their best to make the game itself safe-ish, the after-party on the streets of Tampa was a different story. Because following the Bucs’ blowout victory, hordes of maskless fans partied hearty, in a foolhardy display that can only be described as ‘Florida.’” — STEPHEN COLBERT

“Yeah, they partied hard in Tampa. One girl was so drunk, she made out with the Vince Lombardi hologram.” — JIMMY FALLON

“You know, health officials are frustrated because they’ve spent the whole last year trying to educate people about the importance of masks and social distance. Unfortunately, explaining science to people from Florida is like explaining Zoom to your turtle.” — JIMMY KIMMEL

What We’re Excited About on Tuesday Night 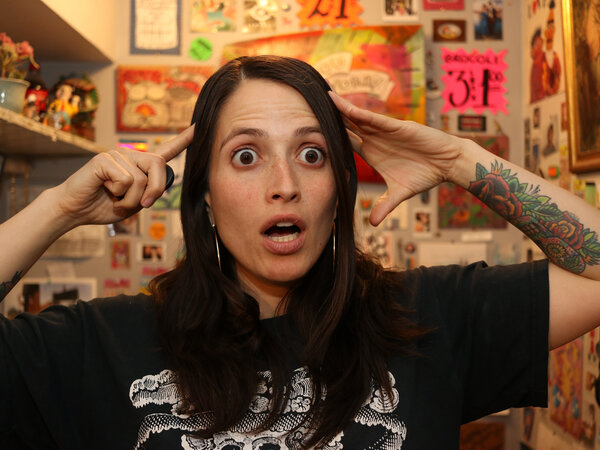