It looks like Prince Harry and Meghan Markle have truly found their new calling — as writers. First, Markle penned an adorable children’s book called The Bench, then came the bombshell news that Prince Harry will be writing a memoir (which we seriously cannot wait to read). Now, the latest literally news is that the former royals’ 20 million dollar book deal with Random House may not just be for Harry’s memoir. Yes, you heard us right: Apparently, there are even more Meghan and Harry books in the making… 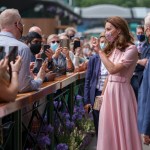 
Kate Middleton Is Back at Wimbledon After Covid Exposure Scare

The couple’s publishing deal is reportedly for four books. And while a rumor that Harry’s memoir was actually going to be split into two volumes, with one to be published after the Queen’s death, per the Daily Mail, a spokesperson for the Sussexes has denied that, telling Page Six that only one memoir for Harry is planned. But the publication is reporting that the deal will include a book focused on leadership and philanthropy, which both Harry and Meghan will write. And here’s where it gets really exciting: It’s also rumored that Markle will write a memoir of her own! As Page Six reported, “royal observers ponder whether a Markle memoir will be the first chapter in a pivot to her long-rumored political aspirations.” There’s also mention of a wellness book to be written by Meghan.

We cannot wait for the release of Harry’s book and please fingers crossed, a memoir from Meghan, as well. For now, we’ll just have to wait and see what ends up getting written and released. We’re sure that whatever it is, it will be pretty awesome. And in the meantime, we’ll read The Bench to our kids.