Molly Ringwald and her lookalike daughter Adele Georgiana stepped out on the red carpet looking exactly as you would expect: Pretty in pink. The duo was enjoying a mother-daughter night on the town at the American Ballet Theatre’s Fall Gala in New York City on Tuesday night.

Ringwald wore a blush velvet gown while 12-year-old Adele nailed the assignment with a strapless cream dress fitted at the waist with a warm pink wrap  — and yes, pink hair to match. We cannot believe how much the two of them look alike, it’s like we are looking at a mini-me version of Ringwald as she started to make a splash in movies like The Breakfast Club and Sixteen Candles. 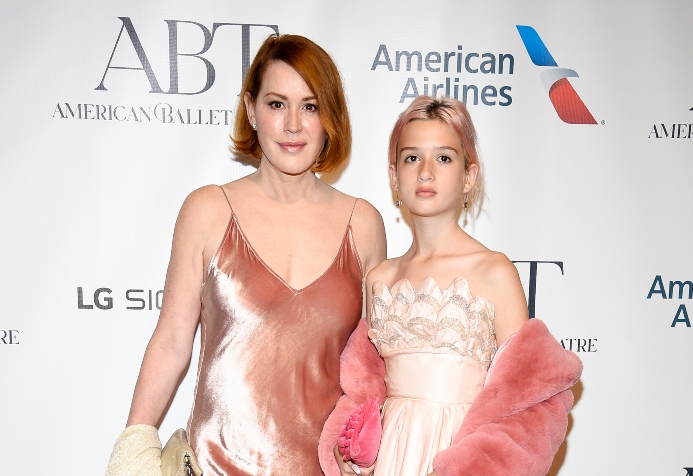 Ringwald is also mom to daughter Mathilda, 18, and son Roman Stylianos, 12, (yes, Adele has a twin brother) with husband Panio Gianopoulos. The Riverdale actress has recently been talking about her Brat Pack film legacy and how she has mixed emotions about their impact on her kids. It definitely is a different time. People ask me if I’ve watched them with my kids, and I did watch the first one … with Mathilda. And it was such an emotional experience that I haven’t found that strength to watch it with my two other kids,” she told Andy Cohen on his SiriusXM show, Radio Andy.

And she already can imagine the reaction of Adele, whom she calls “the most woke individual that you’ve ever met.” Ringwald continued, “I just don’t know how I’m gonna go through that, you know, watching it with her and [her] saying, ‘How could you do that? How could you be part of something that…,’” she laughed. But at the times these films were cutting edge and speaking to teens about all of their issues  — and now it looks like Adele is leading the way to a better path, just like her lookalike mom did over three decades ago.