Today, Sports Illustrated revealed the cover models on its 2021 Swimsuit Issue, and we are blown away by the gorgeous, strong, talented women of color they chose to feature this year. Naomi Osaka’s gorgeous portrait marked the first time a Black female athlete was featured on an SI Swimsuit cover, while Megan Thee Stallion brought the heat as the first rapper to land a cover, and Leyna Bloom’s sultry swimsuit look marked the first such cover to feature a transgender woman. Not only do each these women look amazing, but their portraits make a groundbreaking statement for this year’s magazine. 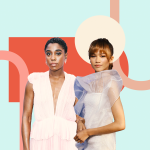 
These Black Women Are Taking Over Hollywood

“If there’s one thing that our cover models have in common, it’s that they don’t have one thing in common,” said MJ Day, Editor in Chief of Sports Illustrated Swimsuit about the choice to feature Naomi, Megan, and Leyna on the cover on the 58th installment of the issue. “They look different, have different upbringings, have different passions and inspirations. But each is a reminder that beauty comes in many forms. … Together these women represent three of the most powerful voices of today.”

Pushing far past its old image of just hot babes in barely-there bikinis, Sports Illustrated Swimsuit has evolved into a showcase of individuals whose beauty transcends convention, inspires change, and encourages trail blazers to own and redefine their narrative. We applaud the magazine for its continual efforts towards shifting perceptions of beauty.

In addition to its outstanding cover models, featured below, the 2021 issue features a group of powerfully diverse people to celebrate self-love, acceptance, and transformation. Others notable women featured inside the magazine are Japanese-Dutch recording artist, plus-size model and entrepreneur Yumi Nu; body positive models Gabriella Halikas and Natalie Gage; and Roc Nation stars Tinashe and Anitta; as well as dozens of other inspiring people.

Check out this year’s smoking hot cover models below. 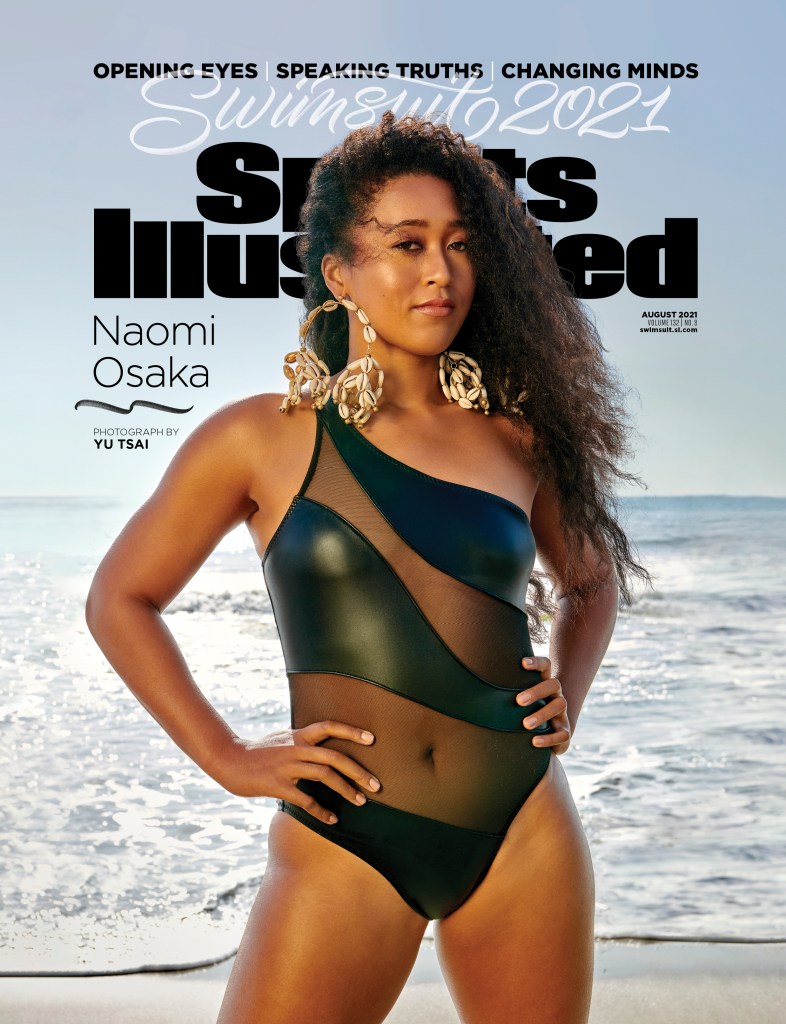 At 23, Naomi Osaka is already an athletic powerhouse and is the first female Black athlete on an SI Swimsuit cover. She holds four Grand Slam titles and is headed to Tokyo to compete in the Olympics this summer. But it’s more than the strength of her 125 mph serve that makes her a role model. She’s raised awareness about racial injustice, human rights and mental health, recently making headlines for withdrawing from the French Open to prioritize her own well being.

“We celebrate Naomi for her passion, strength and power geared towards consistently breaking barriers when it comes to equality, social justice and mental health,” said MJ Day, Editor in Chief. “She is wholeheartedly dedicated to achieving the impossible and has succeeded time and again.” 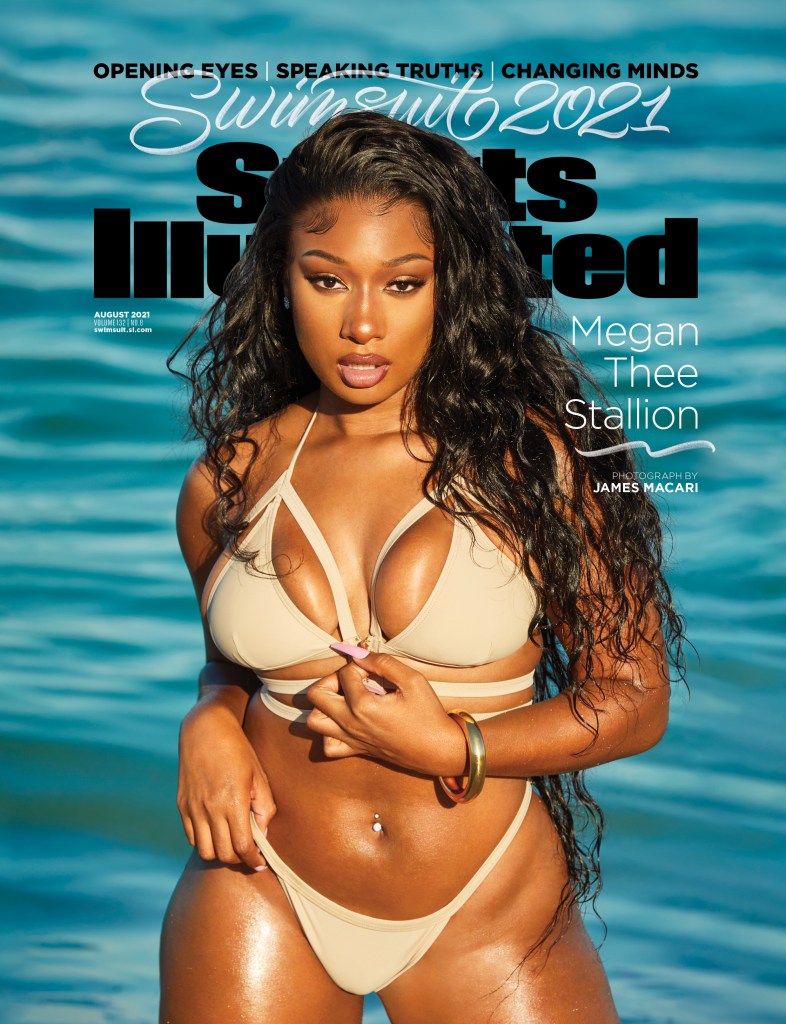 Megan Thee Stallion was the first woman to top the rap songwriters chart and land three No.1 songs on Billboard’s streaming charts in a year. Now, the 26-year-old voice behind “Hot Girl Summer” can add another historical moment to her résumé as the first rapper on the SI Swimsuit cover.

“Megan Thee Stallion … is a magnetic powerhouse taking the world by storm,” said MJ Day, Editor in Chief. “Megan Thee Stallion doesn’t stay in one lane. In fact, she encourages everyone to be in multiple, and this is what we love about her. She captured the world’s attention with her music and style, but what caught our attention was her unfiltered approach to the way she makes you think. She uses her platform to push boundaries, dissect societal norms and encourage humans to think about the backward way our society continues to operate.” 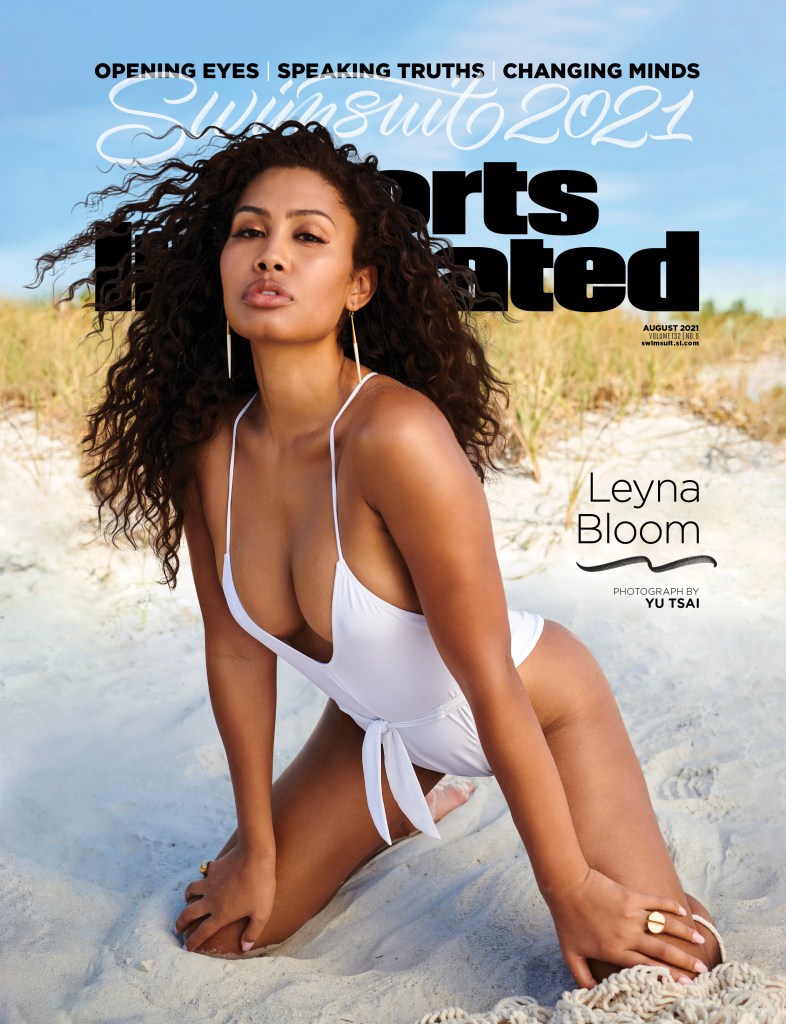 Leyna Bloom began her rise to fame in the ballroom dance community. Since then, the 27-year-old has broken numerous barriers. She was one of the few openly transgender models to walk the runway during New York Fashion Week in 2017 and made her acting debut in the film Port Authority, which in 2019 became the first film in Cannes Film Festival history to feature a transgender woman of color in a leading role. Bloom is passionate about using her fame to speak out about acceptance, love and change to inspire self-love and acceptance.

“Leyna Bloom makes history as the first transgender cover model in Sports Illustrated Swimsuit’s history, and the first trans person of color to appear on our pages, solidifying the fact that the more diverse and inclusive a community, the stronger it becomes,” said MJ Day, Editor in Chief. “Leyna is legendary in the world of activism, strikingly gorgeous, and has an undeniable sense of self that shines through the minute she walks on set.”

Before you go, click here to see celebrity women of color share the first time they felt represented on screen.