The call was completely unexpected. It was Concha Buika’s manager on the phone to say that Carlos Santana had invited her to work on the album he was making. “I was like, no!” Buika recalled by telephone from her home in Miami. “I was so nervous and so excited. I couldn’t believe it.”

Buika is a multilingual singer and songwriter from Spain who has fused flamenco, jazz, rock, African and Afro-Caribbean rhythms and more. She won a Latin Grammy in 2010 for the album “El ÚltimoTrago,” a collaboration with the Cuban pianist Chucho Valdés, revisiting rancheras from the Mexican singer Chavela Vargas. (Although Buika and the Santana band have done a few performances together, they are touring separately this summer. Buika is performing at Central Park SummerStage on Sunday.)

Buika expected to be a guest vocalist, for perhaps a song or two, on an album filled with other guests and would-be pop hits, along the lines of Santana’s 1999 blockbuster “Supernatural,” which has sold more than 15 million copies in the United States alone. (On tour this year, Santana is celebrating that album’s 20th anniversary and the 50th anniversary of his barn-burning Woodstock set.) Instead, Buika became the singer and co-writer of every song on “Africa Speaks,” Santana’s new album.

“Africa Speaks” ranks with the fiercest albums in Santana’s 50-year career. It doesn’t aim for neat, concise, radio-ready tracks like “Supernatural,” which featured the Rob Thomas collaboration “Smooth.” It is built on volatile, live-in-the-studio jams that can stretch out or pivot suddenly and startlingly — like the nine-minute “Blue Skies,” which starts out jazzy and meditative but veers into hard-riffing blues rock. Through most of the album, Santana, 71, plays guitar with a slash-and-burn attack. Buika’s voice, which carries the taut, intricate arabesques and throat-tearing passion of flamenco toward rock peaks, is every bit its equal.

By phone from San Francisco, Santana said that usually when he plays guitar, “The main thing is to give a nice juicy hug to that note. But there’s a time to get a hug and a time to scratch like a vicious mean tiger or a leopard. There’s a lot of that on this album.”

He added, “To tell the truth, I was concerned when I was writing that this particular tone on the guitar would be a little too much to handle for people’s ears, because it’s so piercing and it’s so raw, with teeth and claws. I said, ‘Damn, I’m going to scare a lot of people.’ And then another voice said, ‘No, you’ve done the other one so much. This is good. And it goes perfectly with Buika’s voice and the rest of the band, so leave it alone.’”

Polyglot, forceful, free-flowing and untamed, “Africa Speaks” debuted at No. 3 on the Billboard chart earlier this month. Commercial forces have changed since the era of “Supernatural,” when obeisance to radio formats was taken for granted. “The gatekeeper days of things being jammed down radio’s throat and then blasted uniformly everywhere are over,” said Rick Rubin, who produced “Africa Speaks.” “That’s not the culture we live in anymore. In today’s world everything is much more grass roots up, not top down. In today’s world, if there’s ever a place where something that’s purely good could find its audience, now is the time for that.”

“Africa Speaks,” Rubin added, is, “not dumbed down for the masses at all. It’s a dense, complicated work that’s just very groovy. And it makes you want to get up and dance.”

“Africa Speaks” was made by plan and happenstance. It originated, Santana said, in his visits over the years to record stores — particularly the Virgin megastore in Paris, which had a huge inventory of African music before it shut down in 2013. “I used to go there religiously and buy anything and everything that moved that was African, with the colors,” he said.

Santana chose favorite tracks from those African albums and brought the playlist to Rubin and the tight-knit touring Santana band. The full band set up at Rubin’s Shangri-La Studios in Malibu, and listened to the African recordings as references. Santana chose sections of songs as templates, sometimes calling for tempo or key changes, and the band started jamming on them. “No practice, no rehearsal, we just listened to the songs,” Santana said.

In 10 days of sessions, the band recorded a remarkable 49 songs. They drew on the Algerian singer Rachid Taha (who also shares a songwriting credit on “Supernatural”), the Jay U Xperience and Easy Kabaka Brown from Nigeria, the bandleader Ismaël Lô from Senegal, the Kenyan saxophonist Mohammed Jabry and the globe-hopping Spanish-French songwriter Manu Chao. They move through rock, funk, calypso, flamenco and the Santana band’s own pan-Afro-Latin fusions.

“Of course we’d ask permission from the writers, the publishers, the lawyers, everybody,” Santana said, “and once we got the green light we would record the songs and we’d take it to the next level.” (Unfortunately, most of the album credits name the African composers but not the title of the underlying song.)

The first music from the Malibu sessions appeared on an EP, “In Search of Mona Lisa,” that was released in January. But those tracks used Santana’s regular band singers. Meanwhile, Santana and Rubin had decided that the new album would be more distinctive if it used female vocals instead. And while doing some late-night internet surfing for African music, Santana had come across Buika. 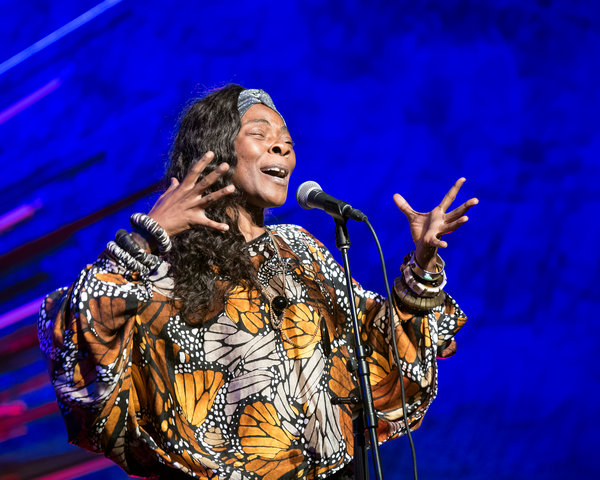 “As soon as I heard her voice,” Santana said, “I woke up Cindy, my wife, and I said, ‘Honey, you’ve got to listen to this!’” (Cindy Blackman Santana is the drummer at the center of the Santana band’s rhythm section.)

Despite a generational difference — Buika, 47, grew up hearing Santana songs — Buika and Santana are parallel figures: cross-cultural hybridizers rooted in Afro-Latin traditions. Both view music, ultimately, as cathartic and curative. “African music is the mystical medicine music to heal a twisted world that is affected, so much, with fear,” Santana said.

Santana was on tour with the band in Australia and New Zealand when Buika arrived in Malibu. “I think that the idea was they were going to play some songs for me and I was going to choose just one,” she said. “But it was all so amazing that I ended up doing 14 or 15 songs! I was deep in a dream, and I was writing music and writing songs and writing lyrics and writing melodies, and I couldn’t stop.”

Santana and Rubin liked what they heard, and urged her to continue. When Santana returned to the studio, he improvised some new guitar parts against her melodies. Buika and Santana didn’t meet in person until the album was nearly complete; by then their music had already merged.

As she does on her own albums, Buika sings on “Africa Speaks” about self-determination, hard lives, betrayal, the power of love and the power of music. “What I did is just to let some of my secrets come from darkness to the light,” she said. “Some of my memories, some of the things that I’ve been through. We have to be honest. It’s very easy for people to understand your music when you tell for real your truth, when you don’t hide anything.”

Most of the lyrics are in Spanish; a few songs switch to English, and others are in Bube, the tribal language of Buika’s mother, who is from Equatorial Guinea. The tribe is gradually disappearing, Buika said; “I wanted to make a homage to them.”

Buika added that she wanted to make international music. “If could go back in time I would probably also sing in Portuguese, in French, in different languages. In different countries people get excited in the same moment in the same song, even if they don’t understand the language,” she said. “That is magic — music is a mystery. And because Carlos is universal, he’s everywhere — they understand his melody everywhere.”

Jon Pareles has been The Times’s chief pop music critic since 1988. A musician, he has played in rock bands, jazz groups and classical ensembles. He majored in music at Yale University. @JonPareles