In classrooms and job interviews, on dating profiles and first dates, we’re often asked to craft an abridged narrative of our lives, to single out the events and characteristics that best define us. It’s a lot of pressure, and an impossible task, so we settle for formulaic prompts and cheesy icebreakers.

The chasm between the raw material of a life and the manipulation of facts into a coherent narrative is wide enough that a writer too shaky on his feet may very well fall right in.

That’s where we find Daniel J. Watts, the magnetic creator and star of “The Jam: Only Child,” a filmed rendition of his one-person show, presented for streaming by the Signature Theater in Arlington, Virginia. (The show also had a brief run at the Public Theater in 2020, as part of the Under the Radar festival.)

Watts, who earned a well-deserved Tony Award nomination for his performance as Ike Turner in “Tina: The Tina Turner Musical,” has the irrepressible energy and timing of a stand-up comic, and his bouncy jabber-jawed delivery connects even through the screen.

And while the production, directed by Lileana Blain-Cruz, is sleek, stylish and technically sound, the script finds Watts unable to transcend platitudes, relying instead on our current conversations about race and gender to shape his story and give it pertinence.

“Only Child” opens with Watts emanating such ease that you can’t help but want to be seduced by the beats and bops of the performance. In denim overalls, a matching jacket and red cap, he cruises out on what looks like the concert platform of the flyest club in town. There’s a mysterious depth to the intimate room, thanks to Adam Honoré’s lighting design, with DJ Duggz behind turntables in the back center, there to accompany the monologue with sounds as varied as Nelly’s “Hot in Herre” and perky, easy listening.

With the lackadaisical swagger of the cool kid in school, Watts greets DJ Duggz with a choreographed handshake, then somersaults into a spoken word rhythm, the hybrid of theater and rap that recalls the master of the form, Lin-Manuel Miranda. (Watts gets the connection, declaring himself “somewhere between Sammy Davis, Dave Chappelle, Leguizamo and Lin-Manuel.”)

He begins with his 1980s childhood in North Carolina, eating Gushers and Zebra Cakes, watching “ThunderCats” and discovering the fun of lighting things on fire in the bathroom while his single mother isn’t around. He grows up awkward around girls, perennially friend-zoned, and has a breakdown in college that has him question his relationship to masculinity and sexuality. All the while the shadowy absence of his father looms in the background. 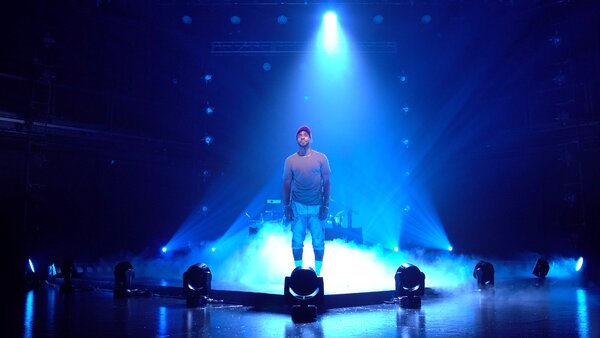 As a writer, Watts is enamored with metaphor, but his analogies get muddled. Within the first few minutes, he has already described the process of putting together this theatrical memoir, from scraps of poetry and raps and recollections, as unearthing skeletons in the closet, unpacking boxes in an attic and grabbing jars of jam from the pantry shelves.

And where is he headed? Despite its title, the show never effectively captures how being an only child affected his development. He describes his admiration for his mother, but she isn’t presented as a fully developed figure. And he glosses over his relationship with his father, until, more than halfway in, he drops the briefest mention of abusive behavior, and refers to the rage he holds onto, before moving along.

In casting about for shape to his story, Watts reaches for politics. He uses his college sexual experiences to talk about consent, but his attempt to hold himself accountable for a questionable drunken hookup — plus his regret at the loss of an idol in Bill Cosby after the comedian’s sexual assault allegations — come across as tone-deaf.

Similarly, a section in which he shares his anger as a Black man in America, name-dropping many of the unjustly killed Black people in recent years, reads like a grasp for political relevance more than a personal tie-in. Because Watts fails to unpack — or even really mention — his relationship to race until this roll call of victims, it feels incidental, despite how poignantly these tragedies may ring true for him in real life.

Late in the 90-minute show, Watts dons tap shoes to dance out a drunken spiral, a physical representation of his tumble down to rock bottom. He trips across the stage with his upper body slumped over, arms carelessly flailing in a pantomime of a man stumbling after one too many beers.

It’s a cleverly conceived performance, shifting from spoken word to tap, another medium in which Watts tells us he found comfort. But Watts struggles to transition back to his story, making the routine feel more like a musical interlude set to the sounds of Bob Marley.

So what’s the upshot of a show electrically performed yet sloppily composed? Watts seems to fumble for the answer himself, ending on a handful of clichés and bumper-sticker affirmations about living one’s truth and saying yes to life.

“Only Child” is a reminder that translating a life into art can take time and distance. Watts has talent to spare, and as for the story — well, doesn’t the saying go that all writing is rewriting?

Daniel J. Watts’ The Jam: Only Child
Through May 7; sigtheatre.org.