According to legend, when the Roman Catholic Church forced Galileo to recant his astronomical proof that the earth revolves around the sun, he muttered, “But still, it turns.” For a group show at the International Center of Photography until May 9, the photographer Paul Graham, who organized the exhibition and also edited the handsome accompanying book, thought that would make an apt title. “He meant, ‘My observations of the world still matter,’” Graham explained.

In recent years, documentary photography has fallen out of fashion. The critical arbiters in museums and galleries favor pictures that are constructed in a studio, lifted off a computer screen, generated through digital manipulation, assembled from prior photos — anything other than directly shot outside the photographer’s door. This self-involvement is akin to the turning away from realism by novelists that Tom Wolfe, in a much-discussed 1989 essay in Harper’s, bemoaned as an abdication of both responsibility and power. With photography, the solipsism is even more dispiriting, because, as Graham says, “The world matters — this is the core of photography, engaging with life.”

Although all the photographs in the show were taken before the pandemic, they are being seen together about a year after lockdowns began. “The name of the show took a different layer of meaning after Covid,” Graham said. “The world goes on. When you look back at these pictures made pre-Covid, you realize, I had it so good, the freedom to roam around and touch strangers, the ability to go into people’s houses. It makes you realize, as photography can, the effortless beauty or unspoken flow that life has.”

Formalism is a foxhole that too many photographers have burrowed into, perhaps in an effort to demonstrate that their work qualifies as art. If that is their reasoning, they are re-enacting an old war, and it is an odd thing to be doing now, when photography has by and large been elevated to equal status with the other arts. A more intriguing explanation for photography’s disengagement from the real world is the ascendance of the virtual, particularly as it streams on our phones in an inundation of pictures. One can begin to believe in the primacy of simulacra and come to think that the proper subject of an image is another image.

The pictures in this exhibition and book were made by seven photographers and one photography team who have resisted this temptation. They are, with one exception, in their 30s or 40s. The American documentary tradition they are revitalizing is not the politically charged movement of the 1930s, which exposed the hardships and injustices in the country at that time, but the version that took hold among the leading street photographers of the ’60s, and which the Museum of Modern Art photography director John Szarkowski, in a seminal exhibition that introduced Diane Arbus, Lee Friedlander and Garry Winogrand to a wide audience, termed “New Documents.” As Szarkowski wrote in the introduction to that 1967 show, “Their aim has been not to reform life but to know it, not to persuade but to understand.”

Indeed, one could classify the photographers in the I.C.P. show according to whether they seem most drawn to the psychologically probing portraiture of Arbus, the group dynamics of Winogrand, or the evocative interiors and natural landscapes of Friedlander.

More important, though, is what they share: a commitment to portray life as they discover it in the world at large, without staging or manipulation; and by so doing, to find and express themselves. 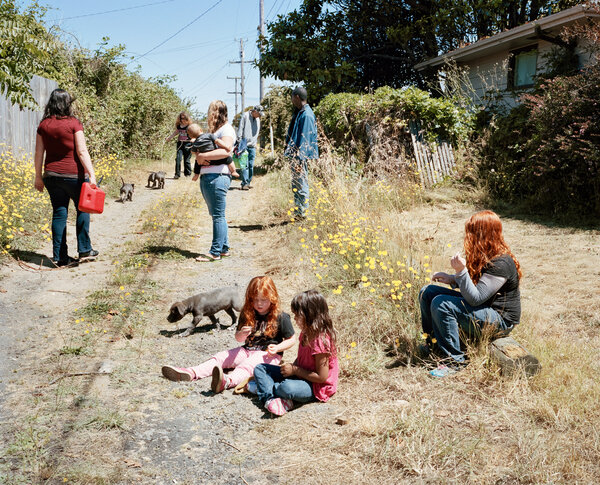 In a photograph that teems with unleashed life, four puppies, four children and five adults are interacting in small groups or going it alone on a country road in summer. Except for one red-haired little girl, the human faces are averted, but each body is wonderfully expressive. The intricacy of the composition recalls the grand tableaus made by Jeff Wall in the late ’80s. However, unlike Wall, who poses his compositions, Hatleberg didn’t choreograph the action when he took this picture and the others in his book, “Lost Coast.”

Based in Baltimore, Hatleberg was represented in the 2019 Whitney Biennial. He embedded himself for this project in the Northern California coastal town of Eureka, a center of a once-thriving lumber industry. In one of his pictures, a stack of cutdown trees and a couple of rusted-out cars provide a backdrop for a few men who seem almost as worn down. In another, roses bloom defiantly in a yard cordoned off with chain-link fencing and littered with empty plastic drums. Resilience and community in the face of diminishing dreams are Hatleberg’s themes.

Ross, whose Academy Award-nominated documentary film “Hale County, This Morning, This Evening” is on display at I.C.P. along with his still photographs, uses a large-format view camera in an Alabama region where Walker Evans famously depicted a family of white sharecroppers in 1936. But Ross’s subjects are, like himself, Black. He has lived in Alabama part-time for more than a decade, and his photographs reflect his intimacy with the scraggly landscape and its tough-minded inhabitants. A photograph of a little girl hiding behind a rose bush, yellow ornaments of her hair commingling with the red flowers, suggests that there can be beauty even in adversity, even while in hiding.

Almost too conceptually sharp a line to be believed, Delmar Boulevard in St. Louis separates two neighborhoods: the one to the north is 95 percent Black with a life expectancy of 67, and that to the south is 70 percent white, life expectancy 82. Brutti and Casotti, Italian photographers who visualize statistical measures of inequality and residential segregation, infused this divide with human reality by photographing in color the avenue, with its car repair shops and warehouses, marked by a central double yellow line, and complementing those pictures with others, in black and white, of the homes and residents who live on the north side of a street that is in fact a chasm.

Halpern’s photographs of Zzyzx, an unincorporated settlement on the edge of the Mojave Desert, which was known as Soda Springs until it was renamed in 1944 by a charlatan healer, have a hallucinatory quality appropriate to this sun-baked, end-of-the-earth locale. Photographers have long used composites or odd vantage points to create surreal visions. Halpern’s pictures — of a shirtless, bearded man with a stone clenched in his closed eye, a curving stairway to nowhere — demonstrate that nothing is weirder than a straight photograph of an uncanny subject.

The best known and, at 60, the eldest of the photographers in the show, the British Winship devoted over a year, from 2011 to 2012, to traveling across the United States, as an empathetic ethnographer studying the people she encountered in their natural setting. Like the stag she photographed on a grassy bank by a highway, her subjects usually appear a little defensive and displaced. She approaches all of them, even the deer, with an uncommon tenderness. A father and son, dressed in their Sunday best, stand outside a building that looks like a school. It could be the boy’s graduation day. The father is puffed with pride. Perched on a curb that elevates him above the taller man, the boy looks away from the camera, his hand absent-mindedly touching the ear of his dad. It is a beautiful, moving dual portrait.

British-born and a resident of Rhode Island, Wolukau-Wanambwa, in the series “All My Gone Life,” combines archival images and his own photographs to convey a tense mood of thinly covered-up violence and oppression. Along with a still from the 1936 movie “Dimples,” of a smiling Shirley Temple doffing her top hat among Black actors in minstrel show drag, we see a prison guardhouse by a fenced yard that is dominated by towering searchlights. Outside a decrepit house with a boarded-up window lies a discarded doll of the Cookie Monster from “Sesame Street,” staring in open-mouthed stupefaction, and an old, torn-up, yellow police tape, marking a crime scene that, like a negligible Shirley Temple musical, has stained what surrounds it even though it is no longer remembered.

Awarded a master’s degree from the Yale School of Art in 2012, Choi shoots short videos of people who are usually alone and seemingly lonely: a stout young man playing an orange kazoo and stroking an orange cat; a gabby, elderly fellow with a plate of food in what appears to be an S.R.O. unit; a gray-haired woman winding a clock. At one point in each video, the movement stops for a second, there is the sound of a camera shutter, and then the action resumes. Choi places the still photograph of that moment flush against the looped video in an identical frame, replicating the process by which a photographer captures and freezes a moment in the stream of life.

The western slope of Colorado is rugged and forbidding. So are the people who live there, as depicted between 2012 and 2015 by Potter, who resides in Nashville. In sharp contrast to the groupings portrayed by Hatleberg in Eureka, these men are loners. And they are all men in this collection, except for one startling image of a baby cushioned by a dark garment on barren ground. (Even the baby is a loner.) The machismo of the West is a staple of American lore. Instead of the Marlboro cowboy, however, Potter presents us with something that feels real, not mythical — troubled, out of kilter, sexy and a little scary.