Ryan Gosling proved he was the perfect action man while filming for his new movie The Fall Guy in Sydney on Sunday.

The 42-year-old was caught on camera doing his own stunts for the flick across the city’s famous Harbour Bridge.

Pictured hanging on to the back of a skip bin, the Canadian star was filmed as he was dragged along the road at speed by a large truck.

The risky stunt closed off the iconic landmark for most of the day and left locals to battle traffic chaos as they navigated new routes.

Ryan was seen standing on a metal strip of material while he grasped the end of a shovel in what looked like an attempt to climb onto the truck during the intense scene.

Footage of the star in action was captured by an onlooker through a train window as the rail services were still running over the bridge despite road traffic being forced to wait until Ryan was finished filming. 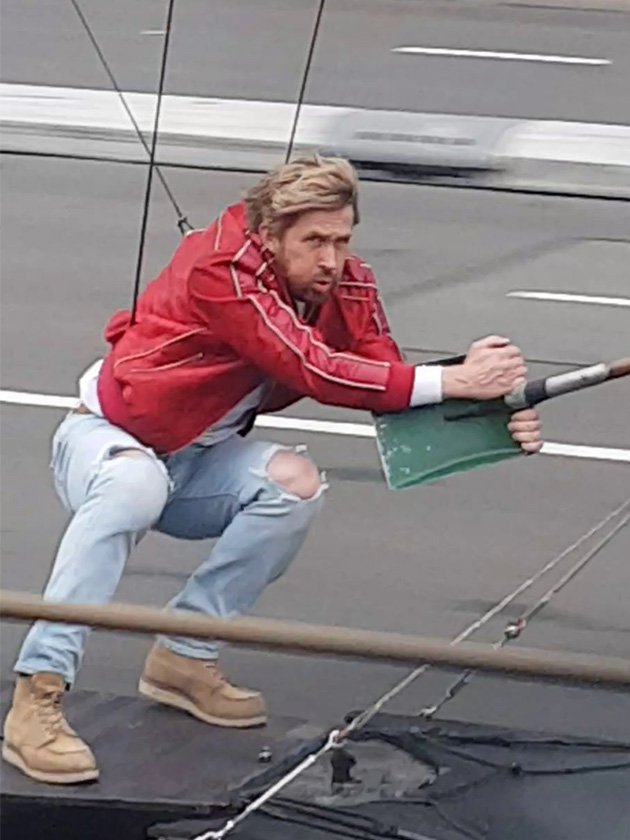 The actor donned a red bomber jacket, washed jeans with holes in both knees and camel-coloured high-top boots for the daring shoot.

Not one to shy away from danger, Ryan wasn’t fazed by the sparks that began to fly from underneath the metal sheet he was standing on and proceeded to perform a front flip as he tried to get a better hold on the skip.

The Sydney Harbour Bridge was closed from 3am to 10am on Sunday in both directions and the cycleway and footpath were shut from 5.30am to 10am.

Sharing their anger online at the disruption, Sydney residents took to Twitter to chastise the production for causing severe delays.

One penned: ‘Great to see the closure of the Sydney Harbour Bridge – eight lanes, plus cycle/pedestrian lanes – so they could film a f**king movie. But it’s great that they can use an iconic bridge in a film because that bridge needs a bit of exposure.’

Another added: ‘I just want to know how much they paid the government for such an inconvenience.’

‘Surely with movie technology, this could’ve been filmed elsewhere and then rejigged to appear as if filmed on the Harbour Bridge,’ a third social media user questioned.

The Fall Guy started filming back in September after Ryan landed in Australia with his partner Eva Mendes and their children Amada Lee, 6, and Esmeralda Amada, 8.