Sophie Rivera, a photographer who won acclaim making luminous portraits of Puerto Rican New Yorkers and other city dwellers before turning the camera on herself, died on May 22 in the Bronx. She was 82.

Her husband, Dr. Martin Hurwitz, a psychiatrist, said the cause was a neurodegenerative disease. She lived in Upper Manhattan and had been in a hospice facility in the Bronx.

Ms. Rivera, who was of Puerto Rican descent, began making portraits of her neighbors in the late 1970s, asking passers-by in front of her Morningside Heights apartment building if they were Puerto Rican. If they said yes, she invited them to be photographed.

The images she made were majestic four-by-four-foot prints of everyday New Yorkers of all ages. They were time-stamped by their hair styles and clothing as citizens of the 1970s and ’80s, but they were made eternal by their direct gazes, formal poses and the nimbus of light with which Ms. Rivera surrounded them.

Vivien Raynor of The New York Times likened these Nuyorican Portraits, as they were known, to the portraits of Édouard Manet; The Times’s Holland Cotter described them as incandescent.

Ms. Rivera was part of a group of Puerto Rican photographers, mostly men, who had set about documenting their community, seeking to wrest back their story from the wider society in which they were often stereotyped. It was a time when contemporary Latinx artists were nearly invisible in museums and galleries. Inspired by the social activism of the 1960s, the group formed a collective and nonprofit called En Foco — in focus.

“What struck me was that Sophie was always right there, she was just part of that scene, one of the few women,” said Elizabeth Ferrer, chief curator at BRIC, an arts organization in Brooklyn and the author of “Latinx Photography in the United States: A Visual History,” published this year.

“The photo world in general was very machismo,” Ms. Ferrer added, in a phone interview. “Sophie was small and quiet, but she made her presence known. She was making street photography when New York was really at its nadir. The camera made her fearless. It gave her a mission and a purpose.”

In the wild West that was much of New York City in the 1970s, there weren’t many positive images of Puerto Ricans. Movies and books typically relegated them to minor roles as drug dealers, addicts and hustlers. Ms. Rivera worried about Puerto Ricans’ representation, or lack of it, in American culture, she told Rocio Aranda-Alvarado, a former curator at El Museo del Barrio, the Manhattan museum devoted to Hispanic artists.

“Sophie wanted to record her people with dignity and tenderness,” Ms. Aranda-Alvarado said.

She was a constant, prolific street photographer who captured the denizens of her own neighborhood and beyond in lush images. (She was particularly drawn to the subway.) Ms. Ferrer likened them to those of Benedict J. Fernandez, a Puerto Rican-Italian photographer who died in March. Yet this work of Ms. Rivera’s is her least known. 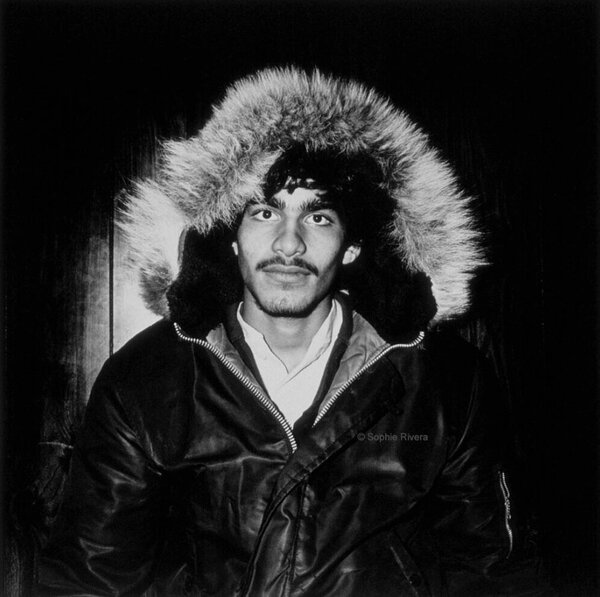 Charles Biasiny-Rivera, a co-founder of En Foco, said in an interview: “She was a very independent soul, and she had her own way of seeing things and giving some order to it. Her series of frontal portraits were stupendous.”

He added, drawing a parallel to Richard Avedon: “Her photography was not in any kind of mode, though Avedon was also beginning to make portraits in a similar manner. It was simply a sort of facing what was before you. Her images didn’t play tricks.”

Ms. Rivera’s photographs are in the permanent collections of the Whitney Museum of American Art, El Museo del Barrio and the Smithsonian American Art Museum, among other institutions.

Her work was bold and inviting, but in person Ms. Rivera was shy and reserved, a slight woman who often wore dark glasses. (She had vision difficulties later in life, her husband said, but early on she made a habit of wearing sunglasses to keep men from hitting on her.)

“She had no small talk,” said Susana Torruella Leval, director emerita of El Museo del Barrio. “If I tried to pry a little bit — ‘Is this because you felt marginalized?’ — she would clam up. There is an empathy in her work. I think she knew what poverty was. I think she knew what suffering was. I don’t know the nature of it because she didn’t let me in.”

Sophie Rivera was born on June 17, 1938, in Brooklyn, the youngest of five daughters. Her father, Frank, was a mechanic; her mother, Sarah, was a homemaker. Her parents separated when she was 5 or 6, and she was sent to St. Michael’s Home, an orphanage on Staten Island, where she remained through high school. She studied ballet privately and worked as a secretary before turning to photography in her 20s, taking classes at the New School and the Art Students League.

Dr. Hurwitz and Ms. Rivera met on Orchard Beach in the Bronx in 1961 and moved into their apartment in Morningside Heights a few years later; they married in 1990. Ms. Rivera set up her studio in the apartment, and it was from the building’s stoop that she found the subjects for her Nuyorican series.

“She could choose one person out of a hundred and make a connection,” said Dr. Hurwitz, who is her only immediate survivor. “She could connect with anyone.”

She was also, he said, an ardent feminist, whose earliest work included essays and photojournalism for feminist magazines. In June 1984, she marched with hundreds of women in front of the Museum of Modern Art, protesting a dearth of work there by female artists; earlier that year she wrote an article criticizing art history books for ignoring female photographers.

Ms. Rivera turned the camera on herself in the late 1980s, photographing her naked body and, in another series, her bodily wastes in a toilet bowl, disconcertingly rendered into beautiful, abstract shapes. This was the work Cecilia Fajardo-Hill and her co-curators chose for “Radical Women: Latin American Art, 1960-1985,” a hit exhibition of Latina artists first shown at the Hammer Museum in Los Angeles in 2017 and at the Brooklyn Museum the following year.

“Everything about Sophie Rivera’s work is relevant for today,” said Ms. Fajardo-Hill. “She was an artist thinking about the body, about love, about representation and self-representation and what that means for a Latina — and a woman.”

For a time Ms. Rivera had her own gallery, which she ran out of an apartment in Washington Heights.

“She’s best known for her portraits, but she is also the great unknown street photographer,” said Ms. Ferrer, of BRIC. “I think that’s part of her power — wanting to capture everyday working people and using photography to reveal their humanity.”