From Leonardo da Vinci’s pyramid design in the 15th century to the supersonic version that helped land the Perseverance rover safely on Mars, the parachute, a device that catches air to control an object’s speed, has played an essential role in land, air, water and space travel. For all of the technology and resources that go into launching a spacecraft out of Earth’s atmosphere, it is the simple parachute that is key to safely landing it. A parachute’s canopy creates drag or air resistance, which means that the air below is pushed up against the underside of the canopy and slows its rate of descent.

Now it’s your turn to make a parachute using newspaper and tape. Some tips: Be willing to make adjustments. Try varying the size of the canopy and the weight of the basket to see how those adjustments affect the rate at which the parachute falls. Let the basket hang freely so it can center itself. Open the canopy as much as possible before releasing, and use the lifting stick to get your parachute as high above your head as possible. Pull out the stick, stand back and watch the fundamental concept of drag at work. 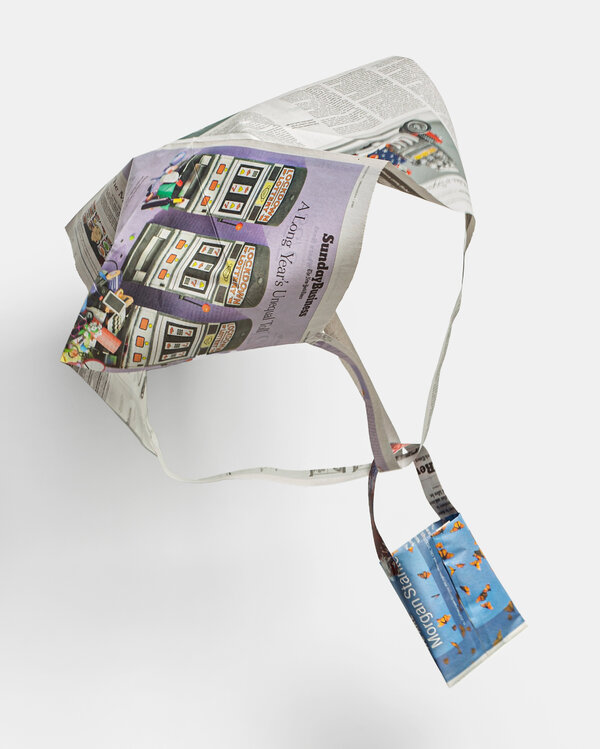 1. Use a full double-spread sheet of newspaper and fold it in half and then in half again.

3. Cut off the remaining strip and unfold all the pieces.

4. Fold and unfold the sheet so that all the creases are raised slightly.

5. Tape a strip to each bottom corner of your sheet, crisscrossing them, then tape to top corners.

6. Tape the strips together where they cross.

1. Use another full double-spread sheet of newspaper. Fold it into quarters and then unfold.

2. Cut out a quarter of the page along crease lines.

3. Fold quarter section in half short edge to short edge.

6. Flatten the base of cylinder; tape the layers together.

1. Cut a strip approximately one inch wide along the short edge of the remaining sheet

2. Fold in half along the existing crease

1. Slip the basket handle under the crossed strips.

2. Place the basket upside down in the center.

3. Curve the handle strip up, and tape to the sides of the basket.

4. Assembled upside down parachute with basket.

1. Use another double-page sheet of newspaper. Fold in half.

2. Place strips of tape along the long open edge of newspaper.

3. Start at the folded edge, roll tightly to tape.

4. Close the tube with tape.

1. Open the canopy, place the lifting stick at center. Lift as high as you can.

2. Quickly, pull lifting stick backward, away from the canopy to release it.